Opinion: George Floyd's death must change the US justice system

The trial against George Floyd's accused killer, a former Minneapolis policeman, is perhaps one of the most important in US history. A conviction would send a strong signal, says Carla Bleiker. 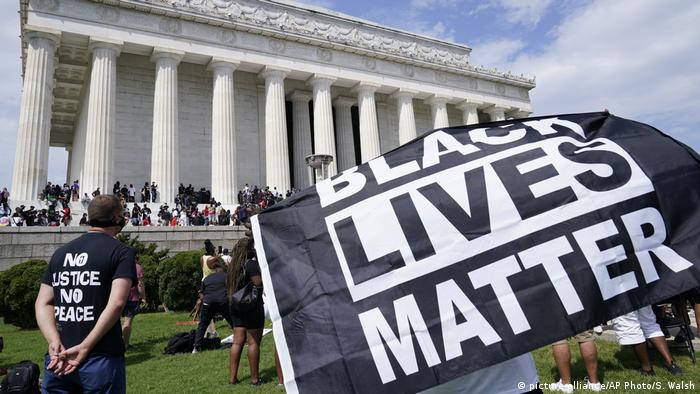 On May 25, 2020, Derek Chauvin held his knee pinned against George Floyd's neck until the Black man died — 8 minutes and 46 seconds.

Later, it became known that Chauvin's inappropriate conduct in uniform had resulted in at least 17 complaints against the 19-year veteran of the Minneapolis police force. Still, until last May Chauvin had suffered almost no consequences for these actions, getting off with only warnings.

There must now be an end to the impunity that cost George Floyd his life. Chauvin, 44, could face up to 40 years in prison if found guilty of second-degree murder. A guilty verdict would be a clear signal that wearing a police badge doesn't put you above the law — and that signal is urgently needed.

Sadness and anger over the fact that a white police officer could so brutally decide whether a Black US citizen lives or dies, on the street in broad daylight, was palpable across the entire nation in the summer and fall of 2020.

A warning is not enough

Those emotions could be seen in front of the grocery store in Minneapolis, Minnesota, where Floyd was killed and where people continue to place flowers, cards and graffiti on a memorial erected in his name.

They could be felt on the streets of Washington D.C., where thousands of Black Lives Matter demonstrators were violently attacked by police and the National Guard under former President Donald Trump. Not only there, but in all the cities and small towns in which countless Americans spoke out against racism and police violence, echoing the civil rights movement of the 1960s.

Chauvin must not be allowed to get off with just another warning this time. And this incident must not go down in history as a minor rebellion, but as a milestone at a crucial juncture in history.

Politicians in Washington are already laying the groundwork for that change. Last week, the US House of Representatives approved a bill proposing wide-ranging police reform. Among its measures are a ban on chokeholds, rules against racial profiling — and restrictions on police immunity.

It remains questionable, however, whether the proposed bill will win the necessary votes to pass in the Senate. That's another reason the case against Chauvin is so important. A conviction here, with a maximum sentence, would send a strong signal.

Of course, the conviction of a single police officer is but one step toward justice. Still, if Chauvin were to be proclaimed innocent or handed a light sentence, it would be a slap in the face to all those who have waited so long for justice in the United States.

The Minneapolis court hearing the trial is keenly aware of these immense expectations. The building has already surrounded by fences, barricades and barbed wire, and the mayor has said that 2,000 National Guard troops are standing ready.

The verdict in this historic case, one that comes at a time of extreme social tension, must be clear: Police in the US can no longer be allowed to exert the type of violent force that results in the deaths of minorities and not pay a price.

Estonia hit by cyberattacks after Soviet memorial removal 6m ago