France came to a standstill on Thursday as all across the nation workers from the public and private sectors, including teachers and train conductors, went on strike in a country famous for them. 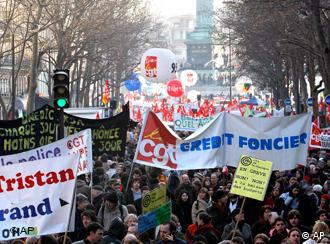 French teachers, postal employees, train conductors and other workers from the public and private sectors stayed away from their jobs on Thursday in a one-day general strike that has disrupted transportation and shut schools across the country.

In addition, hundreds of thousands of people marched in the streets in some 200 cities and towns to express their displeasure with the economic policies of President Nicolas Sarkozy and his government.

Major trade unions called the strike to demand more job security, additional state aid to small and mid-sized companies threatened by the economic crisis and a halt to some of Sarkozy's economic reforms. 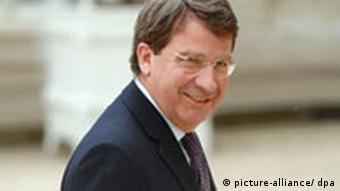 Education Minister Xavier Darcos is planning to slash 13,500 jobs from the French education system in 2009, a measure that unions say will severely impair the quality of education.

"There is a general disdain because it is impossible to have discussions with the government," Pons said.

The FSU trade union said that more than 60 percent of all primary and secondary schoolteachers were taking part in the strike. The government's figures were significantly lower.

In addition, public transport in 77 cities and towns across France was disrupted to varying degrees on Thursday, after employees of the state-owned SNCF rail network kicked off the strike late Wednesday. 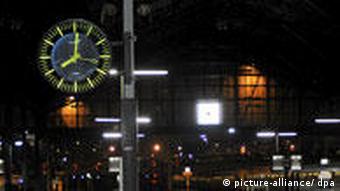 Train stations, like this one in Paris, were empty on Thursday

The CGT union said 41 percent of railway employees were striking. The SNCF said about half of all scheduled high-speed TGV and regional trains were operating.

In the greater Paris area, more than half of scheduled trains linking the capital with its suburbs were not in service Thursday, while an average of about one of two scheduled metro trains were running in the city, the RATP transport system said.

However, there was none of the usual strike-day chaos because many employees stayed away from their jobs, either out of sympathy for the strike or to avoid spending long hours in transit.

Litmus test for the government

In the southern city of Marseille, however, no metro trains were operating on Thursday. 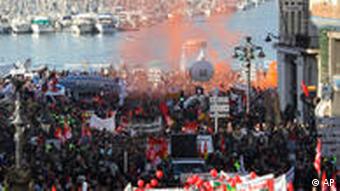 The head of the CFDT trade union, Francois Chereque, called the day's street protests "the largest workers' demonstration in France in 20 years."

His counterpart from the CGT union, Bernard Thibault, said that by mid-day "1 million people" had already taken part in protest marches.

Organizers said that up to 300,000 people marched through the streets of Marseille. Again, police estimates were much lower.

The extent of the strikes and the number of protesters in the streets will be closely watched, as they represent an important test of strength between unions and Sarkozy.

Union leaders have said that a successful strike day will embolden them to increase the pressure on the government through more labor actions.

An African-born man claiming to have a German family background has gone on a hunger strike after a 17-year struggle to gain citizenship in Germany. (15.12.2008)

Tens of thousands of workers in Germany's engineering sector walked off their jobs Monday, November 3 as their union expanded rolling strikes to press its demands for an 8-percent pay raise. (03.11.2008)