Transport Woes Grow in Hungary as Rail Worker Join Strike | Europe| News and current affairs from around the continent | DW | 14.12.2008 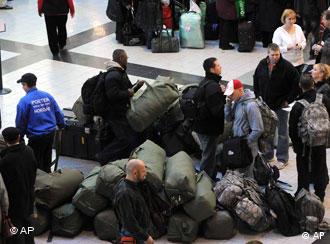 Luggage is piling up across Hungary as transportation workers strike

Hundreds of Hungarian railway workers stopped work at midnight as Saturday turned to Sunday. Imre Kavalecz, spokesman for the state MAV railway company said around half the trains in the main eastern cities of Debrecen and Miskolc were affected, while in other areas, 90 percent of trains were running.

The industrial action was initially confined to the eastern half of Hungary. However, the head of the VSZDSZ, Istvan Gasko, announced in the morning that from 6 p.m. local time on Sunday, the strike will be extended to cover the whole country.

The main rail union, VDSZSZ, is demanding a one-off payment of 250,000 forint (930 euros, $1,263) to every worker as a share in the proceeds from the recent privatization of MAV Cargo, the spun-off freight division of MAV. Other demands include retrospective supplementary payments and the scrapping of a new timetable that includes branch line closures.

Meanwhile, four hours of talks between unions and senior management of the German-owned airport operator Budapest Airport, with participation by CEO Jost Lammers, failed to break the deadlock on Sunday.

The frustrated management of Budapest Airport subsequently issued a statement with a direct message to the strikers.

"The extended work stoppage jeopardizes not only your own jobs, but also those of the airline and ground staff that work alongside you," the statement said.

Gasko met union leaders at Budapest airport in the afternoon for talks on "how to combine the airport and railway strikes with a view to increasing the pressure."

Hungary is bracing itself for yet more industrial action in the near future. Public sector workers last week announced a nationwide strike on Jan. 12 over the abolition of annual bonuses and a pay freeze. Both measures form part of the government's latest, deeply unpopular, austerity drive.

The European Commission is to allow member states to reduce their value added tax (VAT) rates to boost consumption during the recession, officials in Brussels said Tuesday, Nov 25. (26.11.2008)

Emerging economy Hungary has taken out a multi-billion-euro loan with the International Monetary Fund on to help the country’s struggling financial system cope under the excess strain of the global financial crisis. (07.11.2008)