Gen Z and the Holocaust: How do young people address it? 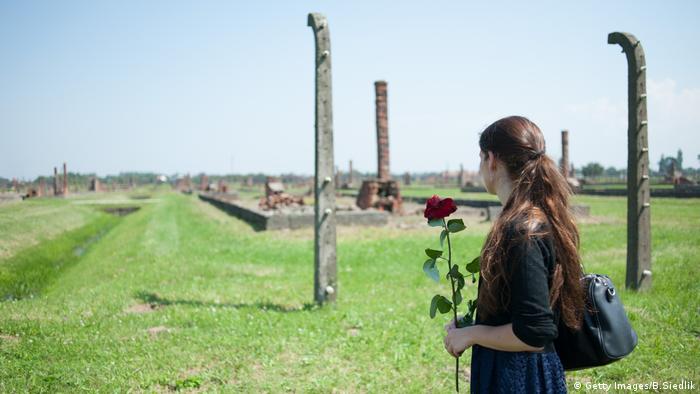 "The Nazi era was so absurd and barbaric that I sometimes find it hard to believe that these things really happened." This is how one respondent is quoted in a new study on how young people today deal with the Nazi era. The study was commissioned by the Arolsen Archives, International Center on Nazi Persecution, based in Bad Arolsen, in western Germany.

The Arolsen Archives are considered the world's most comprehensive archive on the victims and survivors of National Socialism. They preserve original documents on concentration camp inmates, deportations, forced labor as well as survivors' testimonies. Much of the information is available on their website. The collection, with references to some 17.5 million people, is part of UNESCO's Memory of the World Program.

Now, a study has been published documenting the attitudes of the so-called Generation Z — young people between the ages of 16 and 25 — toward National Socialism and the Holocaust.

"The results of the study give me a strong sense that young people nowadays are very open, curious, and free-thinking," says Floriane Azoulay, director of the Arolsen Archives. "This generation is seeing with their own eyes how democracies can come under threat today. I find it very understandable that they combine remembrance with a long hard look at the world they live in today, a world where the voices of populism, authoritarianism, and intolerance are getting louder and louder."

When studying the subject, today's young generation also draws analogies to pressing problems in contemporary society, such as racism and discrimination, the survey showed.

Researchers at the Cologne-based rheingold Institute, which conducted the study, see several reasons for the heightened interest among young people. One important aspect is the feeling of not being partly responsible, and not bearing personal guilt for the Nazi era and its atrocities. "This gives young people a more open-minded approach to this period," says Stephan Grünewald, psychologist and founder of rheingold.

The Nazi era: An opposing image of one's own world

For Generation Z, the Nazi era represents an extreme antithesis to their own reality of life. Today's youth live in a democratic world in which there are a great many choices. They are free to make their own decisions and the paths for development are diverse. "This multi-optional culture of boundless possibilities stands in stark contrast to the culture of marked dominance that defined the Nazi era, with its rigid categories, ideas and convictions. The führer cult, the obligation to unconditionally obey, as well as extreme nationalistic thinking, which took precedent over individualistic or differently-minded notions, creates a conflicting image of the Nazi era that is as fascinating as it is terrible," the study says.

However, the force of this fascination has a flipside, Grünewald points out. The fear of becoming intoxicated by the Nazi era's linearity and display of power or of being seduced by the fantasies that defined that chapter of history is evident in the study. "I'm afraid I would probably have sided with the Nazis in those days, just to make myself look better," one respondent is quoted as saying.

"As a result, there's a certain timidity about dealing with the issue, which comes from not knowing which side you would have been on. You look into your own abyss," the respondent added. Would I have been a victim, a perpetrator, a follower, or even a resistance fighter — how would I have reacted at the time? That is a question that Gen Z is keen to explore.

At the same time, the interviewees expressed an intense need to understand how a person can react in such an inhuman way, what makes perpetrators tick, how the banality of evil comes about. Could something like this happen again? It's a question that affects today's young people. "I also want to hear about the motives of all the SS officers, concentration camp commanders, and people who betrayed their Jewish neighbors. If the reasons were transparent, I would probably realize that something similar could happen to me, too," one interviewee is quoted as saying.

Parallels to one's own life

"The early days of Nazism show how changes can creep in very gradually and how dangerous manipulation can be," another interviewee said.

The susceptibility to right-wing ideologies, fake news, the division of society, and the rise of conspiracy theoriesare all contemporary issues that today's youth also associate with the Nazi era.

"Linking history with today's developments is the crux of the matter. Contextualizing that is the big task we have to address," says Oliver Figge of the Arolsen Archives.

Hurdles in addressing the subject

The study's findings clearly show that if teaching the subject at school is founded only on theory and basic facts, young people often cannot relate to the topic. To them, it seems very abstract, complex and too distant.

"They prefer real-life examples and insights into the concrete realities of peoples' lives," the study says. An examination of the lives, fates and stories of such people as Anne Frankor Oskar Schindler on digital media that young people use and that are expressed in their kind of language brings the topic much closer to home.

The researchers pointed out a successful example in the Instagram account @ichbinsophiescholl (I am Sophie Scholl), which retells the life of Sophie Scholl, a resistance fighter murdered by the Nazis. "They observe how Sophie Scholl dances, listens to music, meets with friends, and at the same time they also understand the development of the young woman during this time," says Grünewald.

The presentation of the content on the subject is essential in order to bring these topics closer to young people. In addition, the youth who participated in the study very clearly requested a more open discussion. "Often, very set opinions and a certain prescribed sense of morality give the impression that the discourse is closed rather than open, and that matters can no longer be questioned," the study states.

"During school classes about the Nazi era, I always had the feeling of having to be careful. There was no conversation or discussion that evolved. You can't have your own opinion there. There is a consensus on how you have to perceive it and learn about it," one respondent is quoted as saying.

The study clearly shows that young people are sensitized to the topic of the Nazi era and the Holocaust. What's more, they draw lessons from the past and try to apply them to current reality. "The confrontation with that time immunizes," summarizes Grünewald.

Holocaust survivor: 'Babies are the best revenge against the Nazis'

Once an inmate at Auschwitz, Lily Ebert never thought she would make it out alive. Now at 98, she has 35 great-grandchildren and has become a star on TikTok.