Gays in Bosnia still living life in the closet | Europe | News and current affairs from around the continent | DW | 27.10.2016

Gays in Bosnia still living life in the closet

Bosnia-Herzegovina is trekking the long road toward joining the EU. Along for the ride are an uncounted number of LGBT individuals still living in a patriarchal and homophobic culture. Maya Shwayder reports. 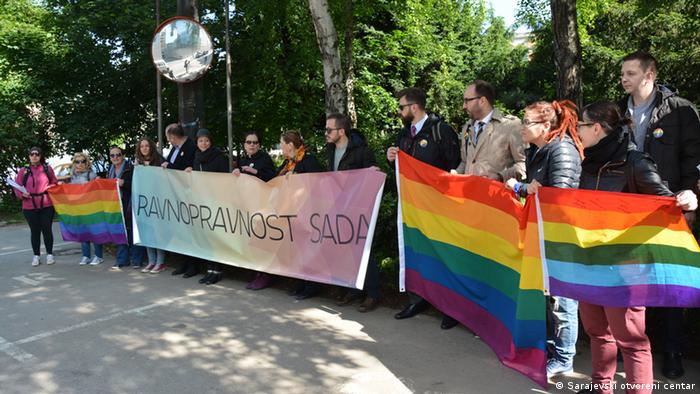 There aren't many causes that unite Salafists and football hooligans. But, beating up gay people is apparently one of them.

In 2008, the LGBT community in Sarajevo planned a four-day cultural festival. It would have been the first of its kind in Bosnia-Herzegovina (BiH), but for the dozens of men - a combination of football fans and religious extremists - who swarmed the festival, reportedly shouting "kill the gays" and "Allahu akbar." They threw rocks and dragged people from their cars. Several onlookers sustained head injuries. Police arrested a total of eight people.

In February 2014, 14 masked men forced their way into the Art Kriterion Cinema in Sarajevo, a space known for being LGBT-friendly, and attacked two people. The Sarajevo Open Center (SOC), a prominent LGBT activist group, said the police have investigated one of the 14 people on a "violent behavior” misdemeanor charge.

In March, 2016, four young men again stalked into Art Kriterion shouting anti-LGBT profanities. Two people were physically accosted. They threatened to detonate a bomb if anyone called the police. The police released all four men after taking their statements. The motivation for the attack was listed as "unknown" in the report. 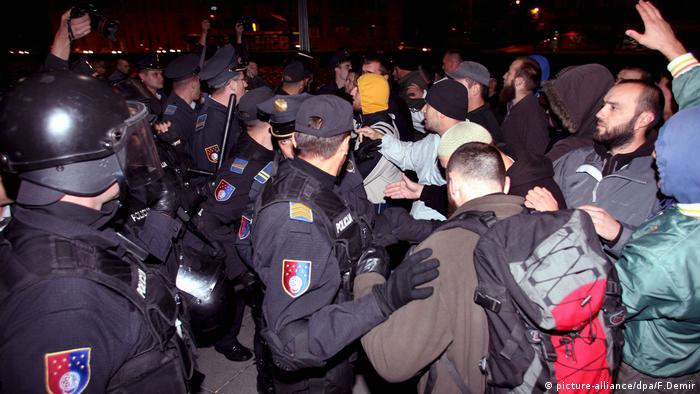 Bosnian police intervened after radical Muslims and hooligans disrupted the first gay festival in Sarajevo in 2008.

These outbursts of violence underscore the daily strain faced by many LGBT people in BiH. "Everyone is afraid of getting fired from their job,” said Mirza, a 21 year old journalist. "Almost everyone I know is not out,” referring to being publicly gay.

"People can't express themselves in public spaces. Your behavior becomes more conventional," Mirza said. "You have to prepare yourself when you go out of your house." He said he has seen his own friends suddenly become more masculine in public: puffing up their shoulders or wearing sunglasses.

Laws regarding LGBT rights are few and far between. The law on Equality of the Sexes, passed in 2003, does not define "sexual orientation." In July, 2016, the Parliamentary Assembly amended the Law on Prohibition of Discrimination, making it illegal to discriminate based on sexual orientation or gender identity. But this has not reduced discrimination.

According to the SOC, in 2015 51 percent of LGBT people experienced some variety of discrimination, including physical violence (15 percent) and verbal abuse or harassment (72 percent).

Same-sex marriage is not mentioned. As a member state of the Council of Europe, and one that wants to join the EU, BiH will have to pass a legal framework that would regulate family rights of same-sex couples, said the SOC. But if passed, will it be implemented?

"We have a lot of laws in BiH, and we accept a lot of international documents and conventions, but they are not implemented," said Maida Zagorac, an SOC program coordinator. For example, Zagorac said, BiH was one of the first countries to ratify the 2011 Istanbul Convention on combating domestic violence and gender-based violence. A 2015 study by the SOC said that 52.8 percent of women over 15 in BiH had suffered domestic violence. But in a country only 20 years removed from a brutal war and genocide, "There is always something more important” to worry about, said Zagorac. 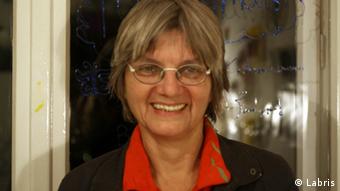 Lepa Mladjenovic is an LGBT activist in the Balkan region. The 62-year-old from Serbia defines herself as a feminist lesbian activist, and began her fight for more than 30 years. Now, 20 years after the war, the movement is re-starting, and trying to reach out to young LGBT people in towns where they may have no resources or knowledge of what being gay means.

Children in schools are not taught anything about homosexuality. "They are not taught about it at all, or they are taught that it is sinful. War criminals survive more and hide less than lesbians do in this society," Mladjenovic said. In October, five people who had previously been convicted of war crimes, corruption, kidnapping, and abuse of office were elected mayors. "I remember one mention of homosexuality in all my years at school," Sergej said.

Following the 2008 attacks, full-blown revolution was out of the question. "We decided that our lives are more important than our fight," Mladjenovic told DW. This means the community has to be subtler about organizing, which makes it harder to be visible. Since they can't make their events public, their advocacy has to happen in more clever ways, Mladjenovic said.

The only LGBT group in Banja Luka is small and informal and uses borrowed office space to meet and organize. Their current project a stealth protest: to drop a rainbow flag on one of the prominent statues in the town. It would be done in the middle of the night, and probably ripped down immediately, several people said. "It doesn't matter as long as we have a picture we can send to the media," another organizer said. This is as open as they're willing to be. "I'm not hiding it," said Sergej of his sexuality and public presentation, "but I also don't feel comfortable holding someone's hand in public."

"Everyone says, 'Oh, it's a private thing,'" Mirza said, "but rights aren't a private thing. It's not about ‘Look at us! we're gay and we're celebrating!' It's about being able to be visible in a public space."

More than 50,000 people have joined demonstrations across Mexico protesting same-sex marriage, according to authorities. The president proposed legalizing gay marriage in May, but the initiative has stalled. (11.09.2016)