A call to ban gay sex in Indonesia echoes official hostility to LGBT rights: HRW | Asia | An in-depth look at news from across the continent | DW | 11.08.2016

The petition by Islamic activists comes after months of government-dealt setbacks for members of Indonesia's LGBT community. "They are scared, but they are not retreating," HRW researcher Kyle Knight tells DW. 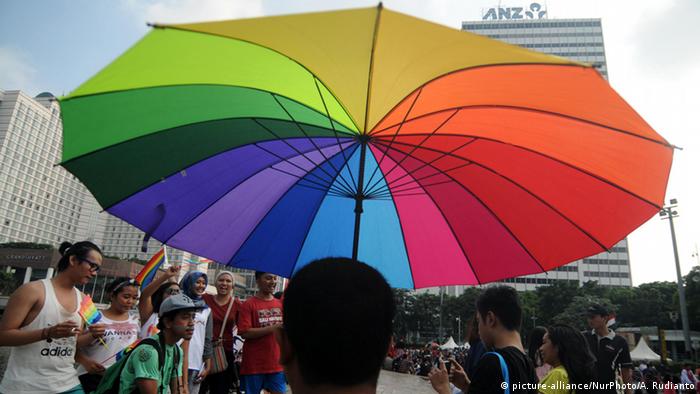 Indonesia's Constitutional Court is considering a petition brought forward by a group of Islamic activists seeking to amend the country's criminal code to make gay sex a crime punishable with a prison sentence.

To get a closer look at the case, DW spoke with Kyle Knight, an LGBT researcher with Human Rights Watch (HRW) and author of an 88-page report released today, "These Political Games Ruin Our Lives: Indonesia's LGBT Community Under Threat."

Knight told DW that, while the effort is being spearheaded by just a few "bigoted" experts with a "twisted worldview," they aren't alone in their anti-LGBT declarations. Indonesia's Child Protection Commission has recently denounced LGBT awareness efforts as "propaganda," while the Indonesian Psychiatric Association has labeled homosexuality a "social deviation." President Joko Widodo has meanwhile remained silent.

It's a desperate situation for LGBT activists, whose "decades-long fight for fundamental rights" has "unraveled in a matter of months," Knight said.

Kyle Knight: A dozen professors claiming expertise in sexuality issues have petitioned the court to amend Indonesia's criminal code, which currently allows for a five-year prison sentence for sex between an adult and a minor of the same sex. The petitioners are asking for the words “adults” and “minors” to be replaced with "people," while keeping the punishment the same. 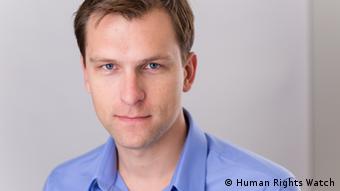 Knight: 'The government has time and again demonstrated that it was unwilling to stand up for LGBT people when they were attacked'

One plaintiff told the court that she was not interested in putting LGBT people in prison, just in enforcing social norms to counter "propaganda" put out by LGBT human rights activists. These are subjective, bigoted moral views that reflect more the twisted worldview of a few self-proclaimed "experts" than what Indonesian law should be saying about its citizens' sexual lives.

How does the Indonesian government view this effort?

Historically, LGBT people in Indonesia have lived amid a tense calm. General social pluralism meant that many individuals could live their lives without experiencing outright violence or discrimination. For many, discretion purchased this safety - keeping your sexual orientation or gender identity private meant you were generally left alone. But at the same time, activist gatherings of LGBT people would come under attack by militant Islamist groups.

Disturbingly, the government has time and again demonstrated that it was unwilling to stand up for LGBT people when they were attacked. Security forces and local officials operated in a way that suggested their tacit approval for the harassment, intimidation, and attack of LGBT activists. National officials remained silent. In early 2016, all that has changed. As we document in our report released today, government officials took an active role in slurring LGBT people and proposing legislative changes that would criminalize not only same-sex sexual behavior but also LGBT human rights activism.

Is it likely that the attempt to criminalize gay sex will succeed?

I have no idea, as it's a court process. The court should uphold Indonesia's international human rights obligations.

How do you assess the current situation of the LGBT community in Indonesia?

From January to April, Indonesian officials launched an unprecedented cacophony of anti-LGBT vitriol. Over time, the government campaign grew beyond hateful rhetoric to discriminatory edicts, and the use of force to repress peaceful assembly. Officials' biased and untrue statements about LGBT people provided social sanction for harassment and violence against sexual and gender minority Indonesians, and even death threats by militant Islamists. State institutions, including the National Broadcasting Commission and the National Child Protection Commission, betrayed their mandates to uphold equal rights when they issued censorship directives about LGBT topics. 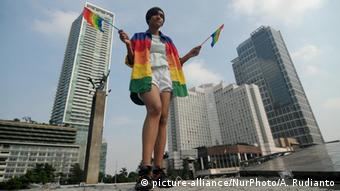 An activist marks the 2015 International Day Against Homophobia, Biphobia and Transphobia (IDAHOT) in Jakarta, Indonesia

When the moral panic subsided over the summer, activists picked up the pieces of their decades-long fight for fundamental rights that had unraveled in a matter of months. One thing remained consistent from the crisis period to the calm: President Jokowi's troubling silence.

The resurgence of the issue in the Constitutional Court case shows that still waters run deep. The court has already heard from psychiatrists who said homosexuality is a form of "social deviation" that can be "cured" by psychiatric treatment, echoing the Indonesian Psychiatric Association's vitriolic stance taken in February, which was widely condemned by international psychiatric bodies. Asrorun Ni'am Sholeh, whose Child Protection Commission office dangerously construed information about LGBT lives as "propaganda" in February, is slated to testify at a hearing later this month.

Between January and April, I interviewed dozens of LGBT Indonesians about how the onslaught of anti-LGBT rhetoric was deteriorating their security and ruining their lives. They are scared, but they are not retreating. The government shouldn't either. The time for leadership for an inclusive Indonesia is now.

How would the criminalization of gay sex affect Indonesians?

Criminalizing same-sex sexual behavior, as some 76 countries still do, has widespread negative impacts on LGBT people as well as everyone else. When governments want to pry into the private lives of their citizens - all the way into the bedroom - it's bad news for everyone. Indonesia has never criminalized homosexuality at a national level, and this is something the government should be proud of and see as the starting point for protecting all of its citizens equally before the law.

Introducing criminal sanctions on same-sex behavior will also have dramatic effects on Indonesia's international reputation, in both the eyes of other governments around the world and investors who want to be able to do business in the country, moving employees there while promoting their companies' values openly.

What measures should be taken to win back LGBT rights in the country?

The first steps the government should take would be to pick up the pieces from the meltdown that occurred earlier this year. Government officials and politicians drove the campaign of anti-LGBT hate, so the government needs to take a leadership role in restoring it. First, all of the official anti-LGBT decrees should be immediately revoked. Then the government should make it clear that its ongoing drive to revoke so-called problematic local by-laws include the dozens that discriminate against LGBT people. These two steps will signal to LGBT people that the government sees them as equal citizens of Indonesia. Our report offers detailed recommendations for further improvements.

Kyle Knight is a researcher in the LGBT rights program at Human Rights Watch.

The interview was conducted by Srinivas Mazumdaru and was lightly edited for clarity.

Why Jakarta presses forward with drug executions despite global outcry

While many are reconsidering violent tactics in the "war on drugs," Indonesia has executed another round of traffickers. President Joko Widodo has relied on the killings to project a strong image within his county. (29.07.2016)

The number of cases of child sexual abuse has risen sharply in Indonesia over the past few years. The president now aims to crack down, though human rights organizations are saying he is going too far. (17.02.2016)