More than 50,000 people have joined demonstrations across Mexico protesting same-sex marriage, according to authorities. The president proposed legalizing gay marriage in May, but the initiative has stalled. Tens of thousands of people on Saturday took to the streets in Mexico to protest President Enrique Pena Nieto's proposal to legalize same-sex marriage in the predominantly Catholic nation.

Pope Francis has said that gays deserve an apology from Christians for the way they have been treated. He also said apologies were owed to other groups marginalized by the church, such as women and the poor.

The protesters chanted slogans, including "Children need a father and a mother" and "Wake up and defend the family."

In the central and southern states of Queretaro and Puebla, authorities estimated some 52,000 people joined in the demonstrations, including representatives of civil society organizations and members of various religious faiths.

Marco Tulio Mendoza, director of the National Front for the Family, the chief organizers of the protest, said the group recorded more than 100 marches across the country.

"The purpose is to defend the family; what we are proposing is the protection of marriage and family. The parent has the right to educate their children according to their convictions, and that education be free of ideologies," he said during an interview.

"We are not against anyone, we're not attacking any group, [and] in none of our communiques have we hinted at a type of person. This is a familial march, one where we march in peace, in a familial atmosphere, and that is our objective of the marches," he added. 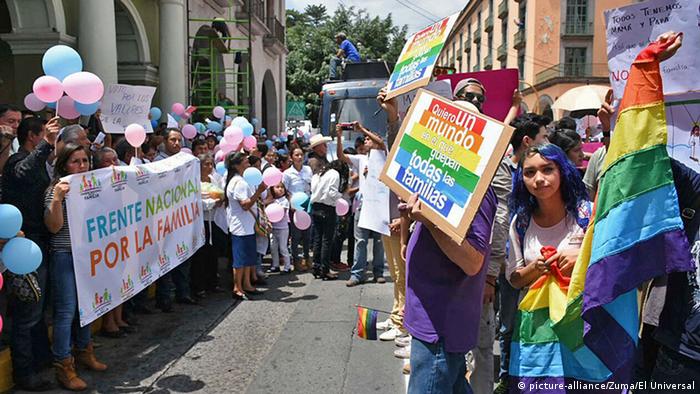 In Mexico City, counterdemonstrators aimed to showcase the need to end discrimination in legislation regulating marriage

In May, Mexico's president signed an initiative to pave the way for same-sex couples to marry in accordance with Mexican law.

The initiative included amending the Mexican constitution and federal civil code to allow marriage without any discrimination "based on ethnic or national origin, disability, social status, health conditions, religion, gender or sexual preference."

However, the initiative has yet to take concrete steps to nationwide same-sex marriage since Nieto's party suffered losses in midterm elections in June.