Global fear of coronavirus on the rise, new poll shows | World | Breaking news and perspectives from around the globe | DW | 20.04.2020

Global fear of coronavirus on the rise, new poll shows

People are taking the threat of COVID-19 increasingly seriously, according to a new Gallup survey. The pollster's president spoke to DW about how the world views the pandemic and its impact on democratic values. 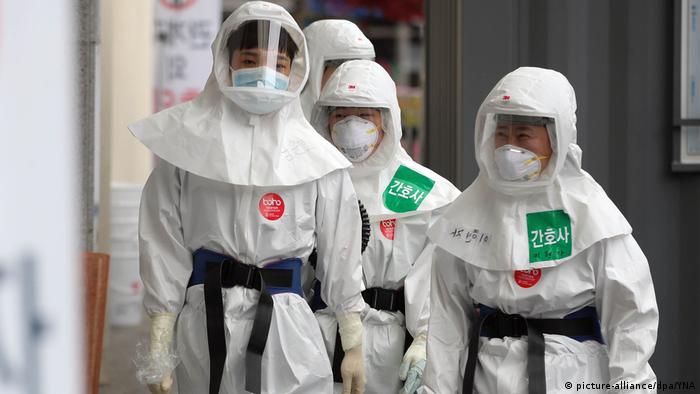 DW: Global concern about the spread of the coronavirus is growing. In addition, worries of an economic and social crisis are deepening. These are only some of the conclusions from the second "snap poll" by the Gallup International Association. The survey was carried out in 17 countries around the world, including Germany, India, Italy, Bulgaria, Russia, the United States and others. What is new in this second poll, compared to the first one your organization conducted in March?

Kancho Stoychev: Over the last few weeks, fear of catching the coronavirus has increased in almost all of the surveyed countries. For instance, with the spread of the virus in the US, the share of those who express their worries that they or a member of their family may actually catch the coronavirus has increased by 25 points. More people are afraid now in Thailand, Switzerland, Argentina, Austria and Japan.

Kancho Stoychev is president of the Gallup International Associate

On the contrary, it turns out that the population in Italy has become more accustomed to the situation, as now the share of those concerned about catching the virus has decreased by nine points. It seems that Italian society has overcome the peak values of fear.

The survey shows that an increasing number of people accept the coronavirus threat is real. Are there any countries where this belief has changed compared to the first snap poll?

Almost two-thirds (63%, up from 59%) of respondents around the world do not think that the threat of the coronavirus is exaggerated. One-third (down from 38%), however, still believe the opposite; 4% cannot decide. With the global spread of the virus and corresponding government measures our survey shows that more and more people accept the threat is real.

This poll shows also that the majority of people continue to support their governments in the fight against the disease and are even ready to sacrifice specific rights. Is this true for all 17 countries surveyed or is there any difference between them?

The highest share of dissatisfaction with the authorities in regard to the COVID-19 situation is registered again in Thailand — 81% disagree that their government is doing well with the current situation. Negative sentiment has increased by 5 points within a few weeks. The second place in terms of dissatisfaction remains Japan — 69% disagree that the authorities are handling the situation well (increase by 7 points). Public opinion in the USA is rather divided — 48% are satisfied with the state measures and 48% are not.

So there is an increased willingness to even sacrifice some human rights if this helps to prevent the spread of infection, but there is also another takeaway: Only 17% of respondents believe that democracy is ineffective in the current crisis. On this issue, there are huge differences between the 17 countries in your poll…

The increased threat has impacted our willingness to sacrifice some of our human rights, if this helps to prevent the spread of infection. In March, 75% of the population surveyed were willing to sacrifice their human rights until the threat from COVID-19 has gone. This figure is now 80%

The highest levels of readiness are reported in Pakistan (92%), India (91%), Thailand (91%), but also in Austria (86%), Germany (89%), Italy (85%) and Switzerland (86%). In Italy, Germany and Bulgaria, the share of those who are willing to give up some of their rights has marginally decreased within the past few weeks.

41% of the population in the surveyed countries are expecting the world to return more or less to its pre-crisis state. However, 45% think that there will be major change, with an almost entirely new world after the coronavirus crisis is over.

Half of the population of the surveyed countries expect relations between the major world powers to become more cooperative. 28% express the opposite opinion — that relations will become more confrontational.

The current crisis also has a serious impact on economic life, as your poll shows. 15% of respondents worldwide claim to have lost their jobs and 12% say that they now work part time. But there are some other interesting figures: One-third say that the crisis has not impacted their lives so far in terms of jobs and income. Here, we also have a gap between rich and poor countries…

Right now, 36% claim that they have lost a serious part of their income (especially in Argentina, Indonesia and Thailand), 28% say that they have temporarily stopped working (mostly in India, Malaysia and the Philippines).

The largest proportion of people saying that the crisis has not impacted their lives regarding jobs and income are in Austria, Germany and Japan.

The good news is that overall democratic principles show signs of endurance in these difficult times.

Editor's note: This interview has been edited for length and clarity.

WHO says monkeypox does not amount to 'public health emergency of international concern' 25.06.2022

The UN health agency stopped short of giving the outbreak the label of highest alert, despite the viral disease being detected in more than 40 countries.