German Economy Minister Sigmar Gabriel has begun his Middle East trip. His first stop is Saudi Arabia, where he leads a business delegation after widespread reports of German weapons exports to the absolute monarchy. 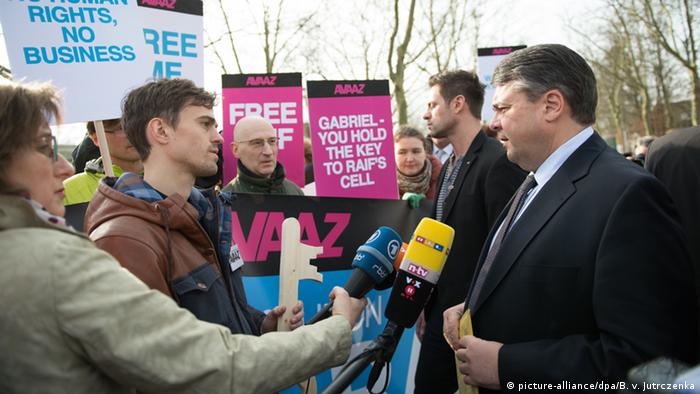 On Saturday, Gabriel, Germany's economy and energy minister as well as vice chancellor, packed a symbolic 1.1 million signatures demanding the release of a liberal Saudi blogger on his departure to the absolute monarchy.

"You can be sure that we have been trying for weeks, right up to the chancellor, to do something," Gabriel said of calls for Raif Badawi's release.

Last year, authorities sentenced the blogger to 10 years in prison, a fine and 1,000 lashes for the crime of insulting Islam on a Web forum. Gabriel is bringing a letter from Badawi's wife, though not a large symbolic wooden key to the blogger's prison cell as offered by protesters on Saturday. Last month, Badawi received Deutsche Welle's Freedom of Speech Award.

Gabriel, the Social Democratic Party (SPD) leader, is the first German minister to visit Riyadh since the death of Saudi King Abdullah and accession of Salman in January. Gabriel also planned to visit the United Arab Emirates and Qatar as the head of a delegation of scores of German business leaders to promote exports.

The vice chancellor's visit follows revelations over the scope of German arms exports to the region. When the SPD was in the opposition, Gabriel and his fellow party members had often criticized Germany's status as the world's No. 3 weapons exporter.

Except for simulators and military software, Gabriel has banned weapons exports to several states, saying German law did not allow for sending munitions to countries that did not belong to the EU or NATO, except for in rare exceptions. He said it was just that, under the previous government of the still-ruling CDU and the deposed-from-parliament Free Democrats, the exceptions had become the rule.

On this trip, Gabriel excluded weapons exporters from his trade delegation. The decision has attracted comment, not all of it positive.

Joachim Pfeiffer, the economy spokesman for Chancellor Angela Merkel's Christian Democratic Union, which governs with the SPD in a grand coalition government - told the dpa news agency that Germany must do everything possible to support Saudi Arabia and similar states. These countries, he said, would help to stabilize the "powder keg" in the Middle East.

Parliamentary Vice President Claudia Roth, co-leader of the Greens, told the Welt am Sonntag newspaper that German guidelines on weapons exports made it "crystal clear that deliveries cannot be made to such countries." In the interview, set for print on Sunday, Roth called Saudi Arabia's authoritarian monarchy "the top terror exporter in the Middle East." She did not put it past the country's leaders to turn weapons sold by Germany on the kingdom's own people.