The so-called Group of Seven richest countries have said pumping up the world economy was an "urgent priority" following two-day summit in Japan. The migration crisis and a possible 'Brexit' also featured on the agenda. 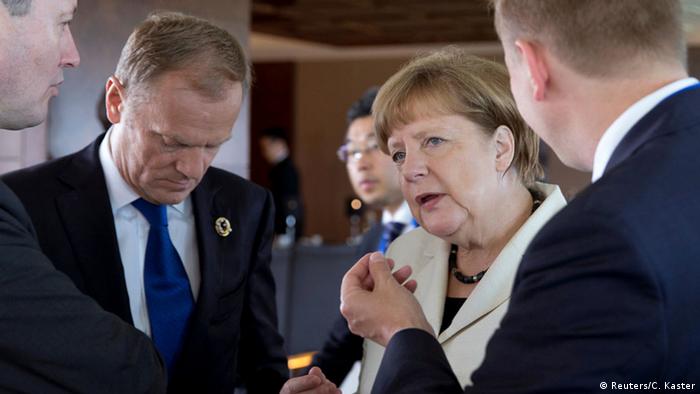 The G7 club of the world's largest industrial national economies expressed concern on Friday about risks to the world economy and pledged to seek strong, sustainable growth.

In a statement ending a two-day G7 summit in central Japan, the leaders committed to avoiding "competitive devaluation" of their currencies, while warning against wild exchange-rate moves.

This represents a compromise between Tokyo, which has threatened to intervene to block sharp rises in its yen currency, and Washington, which generally opposes market intervention.

The seven powers also committed to a cooperative approach in economic policy to stimulate and sustain growth of their sluggish economies with use of flexible spending strategies to stimulate employment and shore up confidence amid economic uncertainty.

German Chancellor Angela Merkel described the summit as a "success" and announced plans agreed in Japan to support Iraq with 3.6 billion euros ($4.03 billion). The funds are aimed at fighting terrorism and addressing the causes of migration.

"The G7 recognizes the ongoing large scale movements of migrants and refugees as a global challenge which requires a global response," the participating countries said in their statement.

"We commit to increase global assistance to meet immediate and long-term needs of refugees and other displaced persons as well as their host communities."

The group remained firm in their stance on sanctions against Russia, condemning the country's "illegal annexation" of the Crimean peninsula from the Ukraine.

Although the declaration threatened "further restrictive measures" to spike the costs on Moscow, the leaders did say that sanctions could be lifted if Russia fully implemented a peace deal for eastern Ukraine.

The G7 also lent its support for keeping the European Union intact. Voters in the UK are preparing for a June 23 referendum to decide whether to leave the 28-country bloc.

"A UK exit from the EU would reverse the trend towards greater global trade and investment, and the jobs they create, and is a further serious risk to growth," the leaders' statement also said.

British Prime Minister David Cameron has been campaigning for Britain to remain in the EU and recent opinion polls suggest he may indeed get his way.

Rising maritime tensions in Asia also led for language in the statement calling for disputes to be resolved peacefully.

"We are concerned about the situation in the East and South China Seas, and emphasize the fundamental importance of peaceful management and settlement of disputes," said the G7 statement, although it refrained from mentioning any individual countries by name.

Foreign ministers from the Group of Seven top industrialized nations have met in the Japanese city of Hiroshima which was once destroyed by a US atomic bomb. Japan hopes to send a message of nonproliferation and peace. (10.04.2016)

There's much to discuss at the G7 summit in Japan, as worldwide crises mount and tensions with Russia and China heighten. DW's Michaela Küfner says the leaders are going to have to do more than just smile for the camera. (26.05.2016)