China was at the top of the agenda as the G7 foreign ministers discussed a range of human rights issues. Addressing the Myanmar coup and Russian aggression was also on the docket. 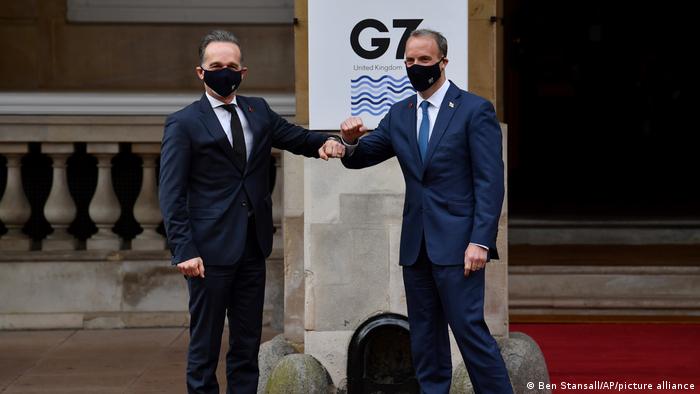 Germany's Heiko Maas (left) is in London to meet Dominic Raab, and other foreign ministers, for the first G7 face-to-face talks in more than two years

G7 foreign ministers gathered in London on Tuesday with human rights and protecting democracy high on the agenda.

A number of global issues of concern were discussed throughout the day — but it was China that came to dominate the agenda.

Speaking after a bilateral meeting with US Secretary of State Antony Blinken, German Foreign Minister Heiko Maas said there was agreement among his G7 counterparts on the best way to confront China.

"We are all of the opinion that it is far more effective if we raise issues like human rights or freedom of the press together," Maas said.

Moreover, he stressed the desire to reach out to countries in Africa and Latin America — where China has sought to expand its geopolitical influence — with concrete offers of cooperation.

Ahead of the meeting, Germany's Heiko Maas expressed misgivings over the behavior of "authoritarian states," which the German foreign minister sees as trying to "play us off against each other," he warned other G7 members on the eve of the talks.

"Breaching the rules is becoming the norm," Maas continued. "Whether it be in the Indo-Pacific region, in Latin America or in Eastern Europe."

Russia's recent geopolitical moves were also under the microscope, as well as the Kremlin's imprisonment of Alexei Navalny and the situation in Belarus.

The foreign ministers also discussed violence in Ethiopia, Iran, North Korea, Somalia, the Sahel and western Balkans, as part of what London said were "pressing geopolitical issues that threaten to undermine democracy, freedoms and human rights."

Representatives from Germany, the United States, Canada, France, Italy, Japan and the European Union turned to China,  the session by watching a video from Myanmar's National Unity Government — a council of ousted lawmakers whose primary objective is to restore partial democracy in the beleaguered nation.

The video from the anti-coup activists and ethnic minorities will update the ministers with the current situation on the ground.

Britain's Raab was expected to call for stronger action against the junta, which seized power on February 1. The tougher measures he is urging from fellow G7 members include expanding targeted sanctions against entities connected to the military, supporting arms embargoes and increasing humanitarian assistance.

Britain, which holds the G7 rotating presidency, has billed the event as a chance to reassert its influence and play a greater role in dealing with the perceived threats of China and Russia.

"The UK's presidency of the G7 is an opportunity to bring together open, democratic societies and demonstrate unity at a time when it is much needed to tackle shared challenges and rising threats," Raab said in a statement.

The ministers of the world's leading economies are meeting face-to-face for the first time in more than two years after a coronavirus-forced pause.

The meeting comes ahead of a summit between world leaders due to take place in June in Cornwall, southwest England.