Authorities in Belarus and Russia say they have foiled a "coup" attempt against Belarusian President Alexander Lukashenko. A TV channel now claims to have video footage of three suspects discussing plans. 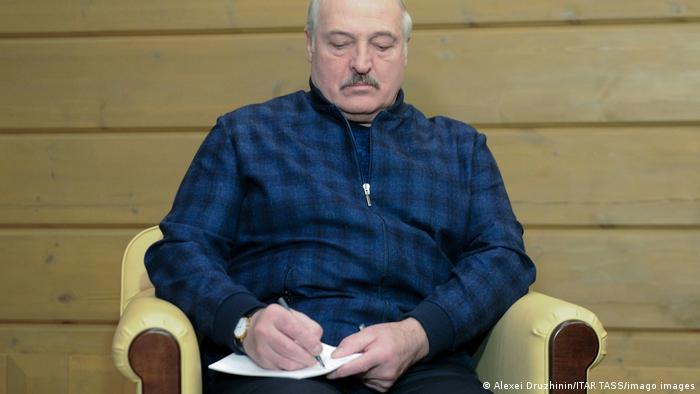 Following claims from strongman Belarusian President Alexander Lukashenko  that there is a US-backed plot to assassinate him, Belarus state broadcaster ONT on Sunday aired a video of the alleged conspirators discussing their plans in Moscow.

Russian and Belarusian security services have already arrested several people over the suspected plot earlier this month. Belarusian authorities have since said that the detainees admitted their guilt and were cooperating with the investigation.

What was shown in the video?

Zyankevich was detained by Russia's FSB security agency earlier this month alongside opposition journalist Aleksandr Feduta in Moscow, with the Russian authorities then handing them over to Belarus.

The ONT report includes a video, apparently recorded with a hidden camera, of the dual US-Belarus national Zyankovich saying that the first task was "to remove the top man," in a likely reference to Lukashenko.

Zyankovich then discussed plans to block Belarusian riot police and take control of "several symbolic objects" in downtown Minsk. Journalist Feduta adds that "at least 30 people would need to be detained" in Minsk in the first hour.

On Sunday, the broadcaster said the video had been recorded in a Moscow restaurant. ONT also showed what appeared to be Zyankovich, Feduta and Kostusev confessing to the authorities, although the combined length of that video segment was around five seconds, with fragmented statements of all three men cut tightly together.

What claims have Russia and Belarus made?

Previously, Russia's FSB said Zyankovich and Feduta had been consulting with US and Polish representatives. Belarus' KGB went a step further, saying that Zyankovich was in contact with US security services and sought to "recruit and bribe members of the Belarus armed forces and law enforcement bodies" for a violent coup.

While addressing the Russian parliament on Thursday, President Vladimir Putin reaffirmed Lukashenko's claims of an assassination plot. Putin also accused the West of pretending that "nothing is happening."

"The practice of organizing coups and planning political assassinations of top officials goes over the top and crosses all boundaries," Putin said.

Both the US and the opposition leaders in Belarus have dismissed the accusations of planning a coup.