Leaders of G20 nations endorsed a landmark deal to establish a global minimum tax rate. They were, however, at odds on issues like coronavirus vaccines and fighting climate change. 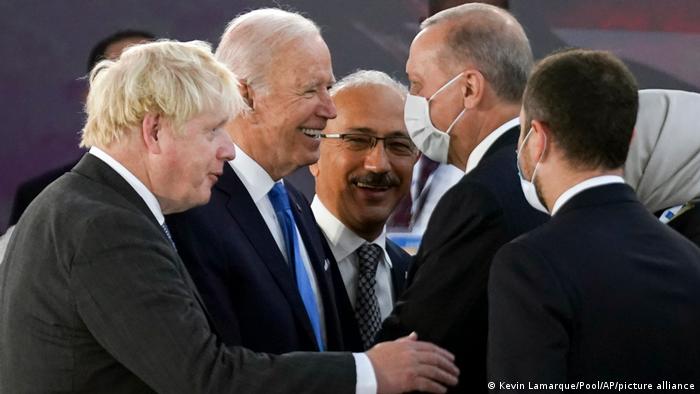 The G20 accounts for more than 80% of the world's gross domestic product, 60% of its population

Heads of the world's leading economies began the G20 summit in Rome on Saturday and endorsed a crucial agreement to establish a 15% global minimum corporate tax for the biggest multinationals.

The G20 leaders spoke on the proposal during the opening session of the summit, which was also their first in-person gathering in two years.

"Today, every G20 head of state endorsed a historic agreement on new international tax rules, including a global minimum tax that will end the damaging race to the bottom on corporate taxation," US Treasury Secretary Janet Yellen said.

The proposal has been backedby nearly 140 countries and is expected to be included in the G20 communique on Sunday. After the formal approval, nations would enact the minimum tax on their own.

Calls for more vaccines for poor

The summit opened with Italian Prime Minister Mario Draghi, the host of the two-day conference, calling for stepping up the pace in getting vaccines to poor nations.

Draghi highlighted that only 3% of people in the world's poorest nations are inoculated, in contrast to the 70% in rich nations who have had at least one dose.

"These differences are morally unacceptable and undermine the global recovery,'' Draghi said.

Draghi urged his G20 counterparts to "do all we can" to meet a WHO goal of vaccinating 70% of the global population by mid-2022.

Reports said the leaders had agreed to commit to that target.

In their comments to the group via video link, Chinese President Xi Jinping and Russian President Vladimir Putin also raised the matter of unequal distribution of vaccines.

Putin blamed the gap on "dishonest competition, protectionism and because some states, especially those of the G20, are not ready for mutual recognition of vaccines and vaccination certificates."

He said the World Trade Organization (WTO) should promote the transfer of technology to developing nations.

Meanwhile, World Health Organization chief Tedros Adhanom Ghebreyesus said it is in the power of G20 countries to thwart the COVID-19 pandemic from raging further and to prevent future pandemics.

"How many more will die, in this and future epidemics? The answer is in your hands?" Tedros said at a talk about health during the summit in Rome.

He called on world leaders to end the vaccination crisis by looking into the shortage of vaccines in poorer countries.

"We understand and support every government's responsibility to protect its own people," he said. "But vaccine equity is not charity; it's in every country's best interests."

Tedros urged the G20 for a quick supply of the vaccine donations that have been promised and also asked the summit to supportjab production in Africa.

German Chancellor Angela Merkel said a financing mechanism would be established within the G20 to better prepare for future pandemics.

Thousands of people marched in Rome on Saturday, urging the international leaders to act against climate change and ensure fair access to coronavirus vaccines.

The march was led by climate activists who were seen playing drums and dancing as they called on global heads to save the planet.

Dozens of climate activists blocked a road leading to the venue of the summit in southern Rome's Eur district. 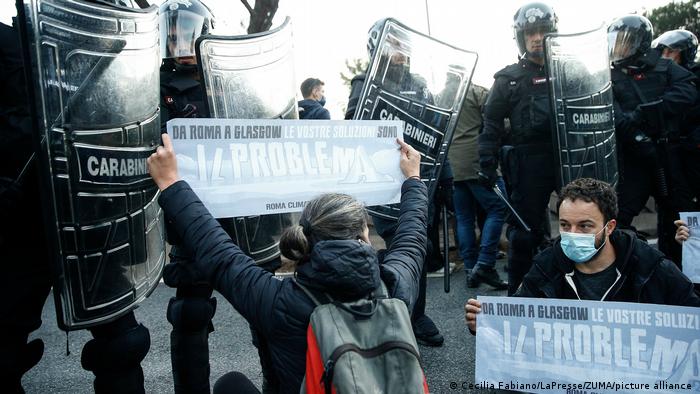 Environmental activists participate in a roadblock

G20: DW's Marina Strauss on the streets of Rome

Hundreds gathered at the Piazza di San Giovanni in Laterano earlier in the day.

The opening address at the protest said that Draghi's system was not made for workers.

The first day of the G20 summit was also the eve of the key COP26 conference slated to be held in Glasgow on Sunday.

However, there was no consensus yet on Saturday on a collective pledge on climate change.

But G20 leaders continue to differ over the other crucial goal of reducing greenhouse gas emissions to net-zero by 2050.

"We have a moment now when we can try and take some of the nebulous commitments in Paris, solidify them into hard, fast, commitments to cut emissions, to cut cars and coal and so on,"  British Prime Minister Boris Johnson, who will host the Glasgow conference, said.