After a breached mine tailings dam released a torrent of toxic mud across villages and land in southwestern Brazil, the full extent of the disaster has yet to become clear. Other dams are also at risk of breaking. 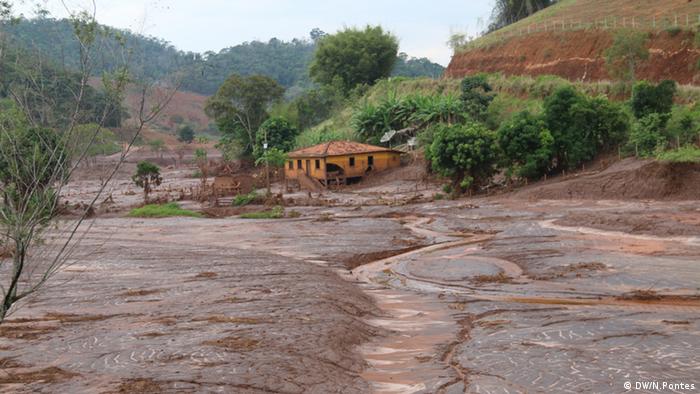 Two weeks after the dam holding back a waste collection pond at the Samarco iron ore mine, near Mariana in Brazil's southeastern Minas Gerais state, broke, the company has admitted that two more such dams are also at risk of breaking.

According to Germano Lopes, the director of structural projects with Samarco, the dam at Santarem has a security margin of 37 percent, while the Germano dam's is at a mere 22 percent.

"I would say they run a risk of breaking," Lopes told DW. "We're implementing necessary emergency operations to increase the security factor," he added. These include using mining rocks as structural reinforcement.

At this point, the scale of the environmental impact from the collapse of the pond, which happened November 5, are still unknown. Marilene Ramos, president of Brazil's environmental and natural resources agency Ibama, said they are still assessing the damage. "After this, we will move to the phase of indentifying environmental restoration projects and how to reverse this damage," she told DW.

According to the archdiocese of Vitoria, numerous species including dourado, surubim, pacu, tucunare and pintado are being rescued and placed into bins full of water as part of "operation Noah's Ark," being organized by local fishers. Otherwise, all riverbed fish would be asphyxiated with mud.

Other marine flora and fauna are also threatened - Ibama estimated that the mud should reach the Atlantic Ocean by Friday (20.11.2015). Samarco has started putting barriers in place in an attempt to block the mud from reaching the ocean. 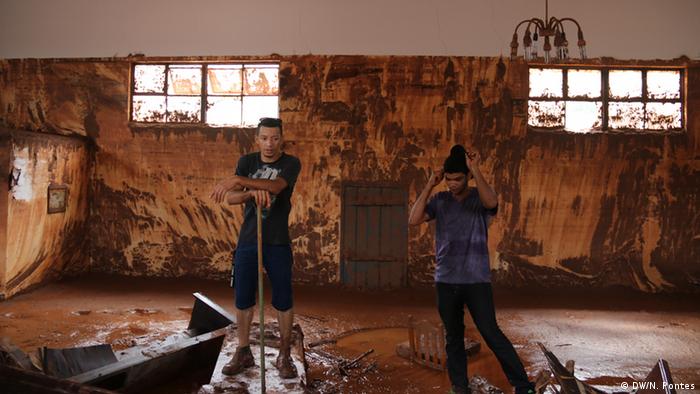 Mine tailings: complete and utter waste

As part of efforts to contain the stain, which has already spread at least 500 kilometers, Samarco plans to employ an organic agent to reduce the sediment load in the water. This is intended to block the mud from reaching the Aimores hydroelectric power plant, which has currently suspended operations.

This measure's effectiveness, however, has been questioned.

Ricardo Motta Pinto Coelho, a specialist in environmental management of water bodies at the Federal University of Minas Gerais, said despite the public fear factor, "in the scale of this accident, I believe the effects will be quite limited." But containment efforts, he added, will not decontaminate the river.

Jefferson Nascimento de Oliveira, a professor of hydrological resources at the Paulista State University, agreed: "This is a palliative - it's not going to save the river." He added that the amount of mud in the river is substantial.

Coelho concurred on the large quantity, adding: "These are very fine particles, without cohesion. There's no way to repurpose this sediment - it's complete and utter waste."

Coelho, who has worked collecting samples along the Rio Doce and its tributaries, said the disaster represents another blow for an already polluted river. "This river was impacted by mining activities, steel mill activities, the cellulose industry - in addition to having been silted, as the basin was deforested over the course of decades." 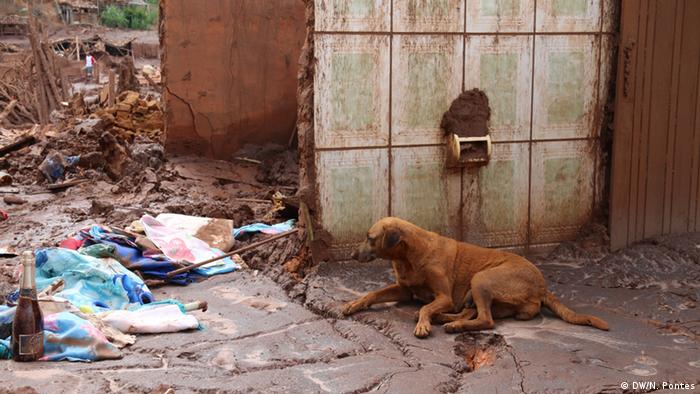 Animals await return of their masters - without food or water

Reforestation was cited as being among the possible measures to restore the area. But Oliveira, citing another case, said all the contaminated soil had to be replaced with better soil first.

At the beginning of this week, state and federal prosecutors inked a preliminary agreement with Samarco - which is equally owned by Vale and BHP Billiton - for the company to pledge 1 billion reais (250 million euros) toward environmental remediation.

Ibama and Brazil's advocate general are gathering information for a civil action against Samarco. In addition to water pollution and loss of biodiversity, it's estimated that 600 hectares of protected areas have been devastated.

The cause for breach of the dam holding back the collected tailings - which had been under operation since 1977 - is still unknown. The agency responsible for tailing pool safety is investigating the matter. 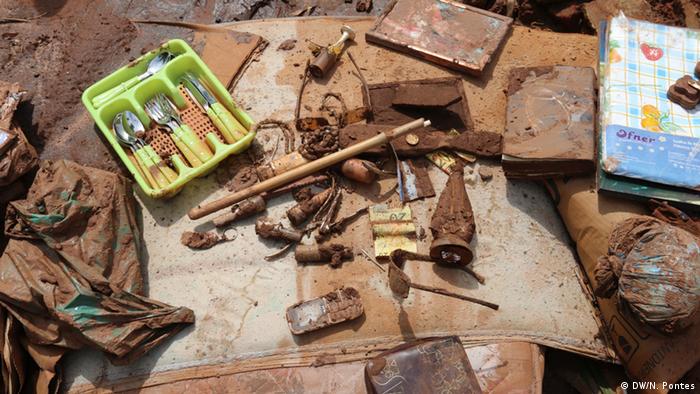 A source who wished to remain anonymous said the commission tried to argue that an earth tremor caused the accident. However, specialists say quite the opposite - that the dam breach could have caused the tremors.

"This is the fifth accident in two years, four from tailings pools, which demonstrates that the dams are not secure," Ramos said. According to Greenpeace, there are 700 such dams of this kind in Minas Gerais.

Also this week, Brazilian President Dilma Rousseff announced a plan to revitalize the Rio Doce - without, however, including any details. She added that an "expressive part" of this should be paid for by Samarco.

The Kayapó people of the Amazon are excellent guardians of the forest but big business interests and a change to Brazil's constitution could threaten the ecosystem they have managed to preserve until now. (22.09.2015)

Canada's Supreme Court has ruled that Ecuadorian plaintiffs can move forward in an Ontario court on their claim for $9.5 billion dollars related to Chevron's environmental damage in the Ecuadorian Amazon. (07.09.2015)

Since the start of this year in Guatemala, nine activists opposing megaprojects have been killed, a recent report says. Green activists in Latin America and Asia continue to pay for resistance with their lives. (21.08.2015)