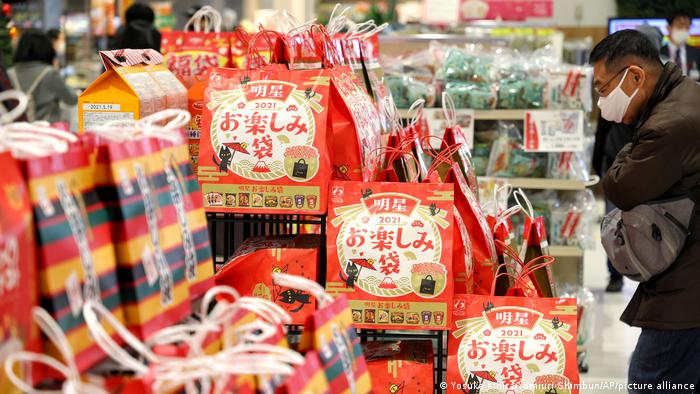 The Japanese tradition of fukubukuro – or lucky bags sold at stores to ring in the New Year – began unseasonably early this year, as retailers attempted to avoid large crowds descending on their premises in search of a bargain.

Fukubukuro typically go on sale at the start of the New Year, with outlets ranging from high-end fashion boutiques to discount liquor stores bagging up a selection of items and customers taking a chance on the bag that they grab. There may be no way of knowing just what is inside, but the understanding is that it will be worth around double of what the buyer pays.

It is not unknown for squabbles to break out over the last remaining bags at some stores, particularly at shops selling famous brands of clothes, jewelry or cosmetics, and retailers say they are mindful this year that they want to spread the shopping frenzy out over a longer period in order to reduce the possibility of shoppers and staff being exposed to the coronavirus. They are also insisting that customers adhere to strict rules on social distancing and wearing masks.

The Seibu chain of upmarket department stores was among the first to release fukubukuro, with lucky bags on sale in its menswear and food sections as early as December 26. Stores operated by Aeon Co. beat that by a day, with more than 400 stores across Japan offering food, including "wagyu" beef and sushi, as well as winter clothing items.

A spokesperson for the company told the Yomiuri newspaper that one of the most sought-after items in its furniture department was a "kotatsu" table, which has an electric heater underneath the top, and is fitted with a blanket to keep users' legs warm.

Kanako Hosomura, a housewife from Yokohama, admitted to being pleasantly surprised to find fukubukuro already on sale four days ahead of the start of January when going shopping this week.

"I was not expecting it at all," she told DW. "To me, fukubukuro are all about the first few days of the New Year, so it felt strange to find them out in the shops already," she added.

She was not too surprised that she could not take a chance on a couple of bags, however, she got a large pack of premium sausages, a cut of ham, a bottle of wine and biscuits in the food department of her local supermarket during her regular shop.

A similar purchase in the cosmetics section was not quite as successful, however, and she ended up with a brand that she does not use and a bottle of perfume that she already has. She says she intends to swap the items that she does not want with friends who have also been out bargain-hunting.

Yoko Tsukamoto, a professor who lives in Hokkaido in northern Japan, said she intends to buy her fukubukuro online this year.

"I did see that some stores have started selling their fukubukuro early this year, so they do not get too busy, but I also notice that more places are allowing people to make a reservation online and having them delivered to their house," she told DW.

"I've done that before, and I think I'll do the same again this year," she said. "I just think it is best to try to avoid potentially being in a small space with other people who might have the virus and ordering online allows me to do that."

Tsukamoto says she hopes to be able to find a bargain like she got last year, a bag that she paid 5,000 yen (€40, $49) for that had a selection of items that were worth more than that figure – plus a gift certificate for another 5,000 yen that she could spend as she wished.

"But I am not sure if that is going to be possible this year because shops are also having a hard time getting by, so they may not be able to be as generous as they were in the past," she said.

Noriko Hama, an economist from Kyoto, agrees that retailers are finding life harder this year and have almost certainly been driven to launch their fukubukuro early because of the dire economic straits the country is in.

"I would suggest it is as much driven by desperation to make a sale as out of concern for customers or staff," she told DW.

"There is little hope in the retail sector that the end of the year is going to see a significant leap in consumption. There aren't so many people out, and they are being more careful with their money because of all the uncertainty around the pandemic," Hama said.

"Fukubukuro also allow companies to clear their decks of inventory that is not selling particularly well, but I do agree that it is a bit of fun for a lot of people at a difficult time," she added.

But she is adamant that she will not be taking a chance on a fukubukuro again this year.

"I like to know exactly what I'm buying," she said. "I'd be disappointed if I ended up with things that I did not want or had no use for."