From the plague to COVID: How epidemics shape(d) history | Culture | Arts, music and lifestyle reporting from Germany | DW | 01.10.2021

From the plague to COVID: How epidemics shape(d) history 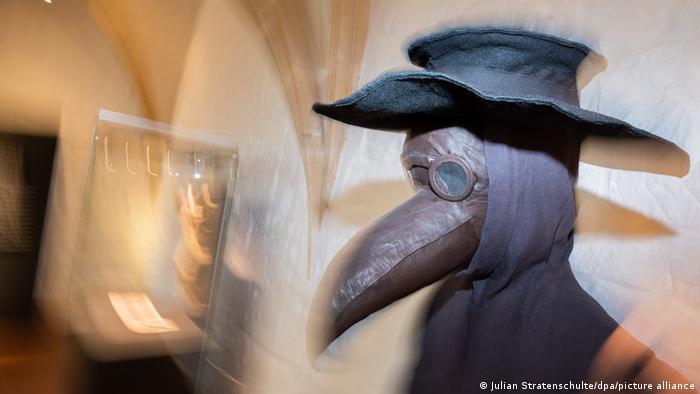 Beaked masks were once used to protect doctors from plague victims

One of my early childhood memories is of me standing on an escalator in a department store, reaching for its handrail. My grandma gently pulled my hand away. "Don't," she said, "it's dirty." She held my hand tightly as we descended.

It must have been the late 1960s, and I was 4 or 5 years old. At that time, the Hong Kong flu was sweeping the globe. It killed an estimated 1 to 4 million people worldwide, yet today it is almost forgotten. Just like the simple hygiene measures of the time, which we have relearned from COVID-19: Keep your distance, wear a face mask, wash your hands. 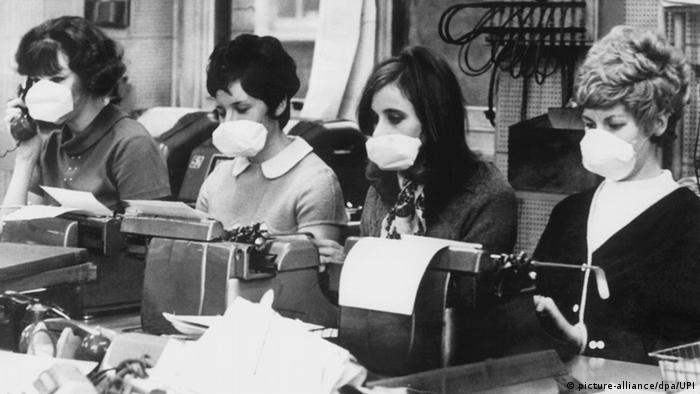 During the flu pandemic in the late 1960s many people wore face masks at work, as here in a London office

My grandmother, whose mother almost died during the Spanish flu pandemic of 1918, was still familiar with these safety precautions.

Before antibiotics and widespread vaccination, infectious diseases such as polio, typhoid, diphtheria and smallpox struck terror into the hearts of people in Europe for centuries.

Today, it is mainly children in less developed countries who die from these diseases; many countries cannot afford the luxury of expensive vaccinations and good health care systems.

'A warning to humanity'

But the SARS-CoV-2 virus has also shaken our sense of security and shown that no one is immune.

"Epidemics," said Oliver Gauert, "are the biggest global threat next to climate change. They just haven't entered the public consciousness to nearly this degree. COVID is a warning to humanity." 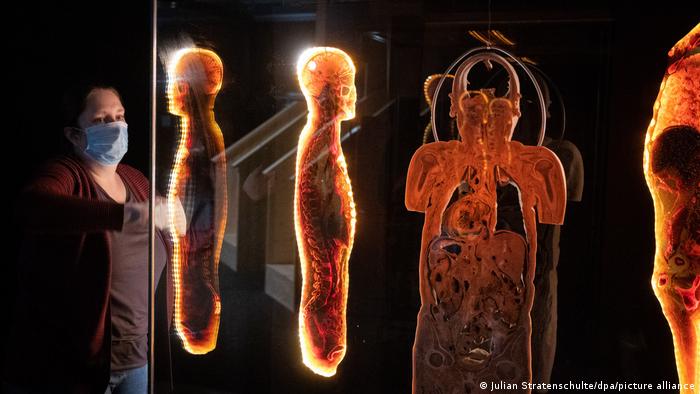 The human body, susceptible to epidemics: A display from the new exhibition in Hildesheim

Gauert has curated what is, by his own estimation, the world's largest medical history exhibition ever.

"Epidemics. Curse of the Past — Threat of the Future" opens its doors on October 2 at the Roemer and Pelizaeus Museum in Hildesheim, in the German state of Lower Saxony. It was conceived in cooperation with numerous scientific institutions, including the University of Applied Sciences and Arts in Hanover and the Helmholtz Center for Infection Research.

A history of epidemics in 30 chapters

In 30 walk-through settings, visitors experience key moments in medicine — from the anatomical theater in Padua, where early cadaveric dissections were performed, to the laboratory of researcher Paul Ehrlich, who developed a cure for syphilis.

The exhibition also reproduces a COVID-19 intensive care unit. Displaying a mannequin hooked up to a ventilator, it is a harsh reminder of the countless people who are still fighting for their lives like this every day in hospitals around the world. 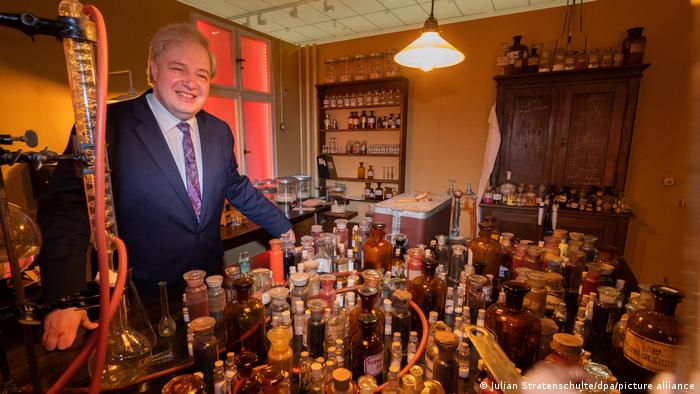 Grim Reaper and the plague

The exhibition also includes major works of art dealing with the topic of pandemics.

In The Triumph of Death by Flemish painter Pieter Bruegel the Elder, the sky in the painting is gloomy; blue-gray clouds hang low over a landscape of charred trees. In front of a mountain of corpses, a skeleton slits the throat of a man in a white shirt, while another towers over a dying king. And behind a gate, an army of other skeletons waits to bring the "Black Death" to the people. 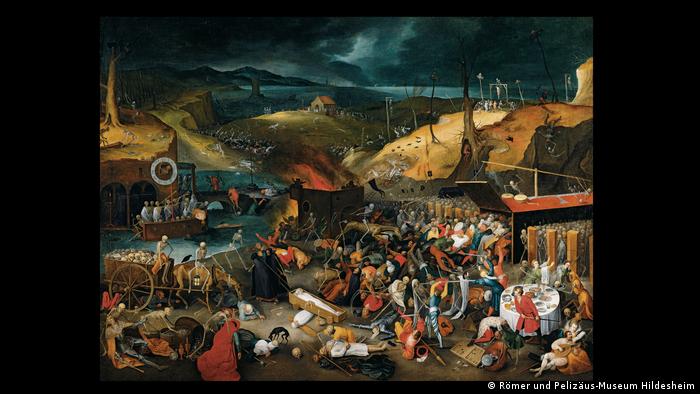 'The Triumph of Death' — an art history highlight of the exhibition

This creepy skeleton — the "Grim Reaper" — is deeply embedded in the cultural memory of Europe as the quintessential emblem of epidemics. And Bruegel's Grim Reaper does not discriminate between poor and rich, or men, women and children.

Even medical historians cannot quite tell how many millions of people ultimately died because of epidemics.

What is certain, however, is that the plague "didn't just affect the poor, as with typhus or typhus fever, but also the elites of society," said Gauert. "So you can imagine that there was a complete redistribution of property and power." Agriculture, trades and guilds had to find new forms of work.

Overcome pandemics thus promoted social, cultural and political change. So did the plague. Until its outbreak in the 14th century, disease was considered a divine punishment. 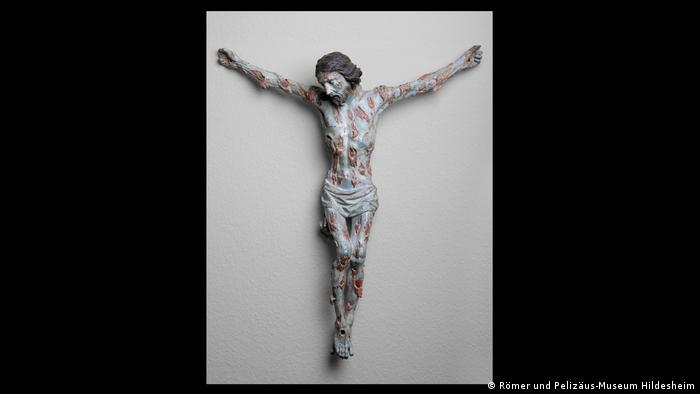 Jesus covered in plague boils: 'Plague Cross' from the year 1700

"But the Black Death claimed so many victims, even in the ranks of the church, that people were no longer willing to put up with it," explained Gauert. "For the first time, a scientific institution, the University of Paris, was commissioned to give an expert opinion on the causes of this disease. That was the first time that such a disease was systematically dealt with scientifically."

Plagues could also bring wars to a standstill and determine victory or defeat — as in the early 16th century, when the Spanish conquistador Hernan Cortes and a small army of mercenaries brought down the mighty Aztec empire.

During the battle of Tenochtitlan, an epidemic broke out among the Aztecs, killing nearly half of the native population. The conquerors had brought the epidemic (measles, smallpox, or another pathogen) with them from Europe. They themselves were largely immune — the Aztecs were not.

The transmission of epidemics from the Old to the New World may have even influenced the climate, a 2019 study suggested.

Around 90% of Native Americans are thought to have died from introduced plagues, which is why many square kilometers (miles) of previously cultivated land lay fallow. Trees and shrubs once again grew unimpeded, absorbing carbon dioxide from the atmosphere.

The world's climate cooled, leading to the so-called "Little Ice Age" around the middle of the 16th century, according to researchers at University College London. 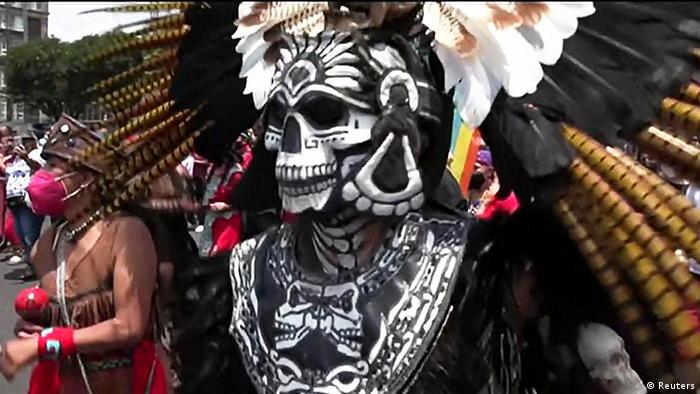 In August, Mexicans commemorated the fall of the Aztec capital 500 years ago

Why are infectious diseases gaining ground?

First, the global movement of goods and people, which allows diseases to spread worldwide within a matter of weeks.

Second, climate change, which is increasingly widening tropical and subtropical zones. For example, the tropical-subtropical, mosquito-borne dengue fever is also expected to be present in Germany within a decade.

The third factor is that people are penetrating into ever more remote regions of the jungle, where dangerous viruses lie dormant — as evidenced by Ebola and AIDS.

And finally, the decreasing effectiveness of antibiotics in the fight against bacterial infections, due to increasing antibiotic resistance.

But Gauert also emphasized that these are still largely controllable threats. Unlike previous generations, we are no longer as helpless against viruses and bacteria. 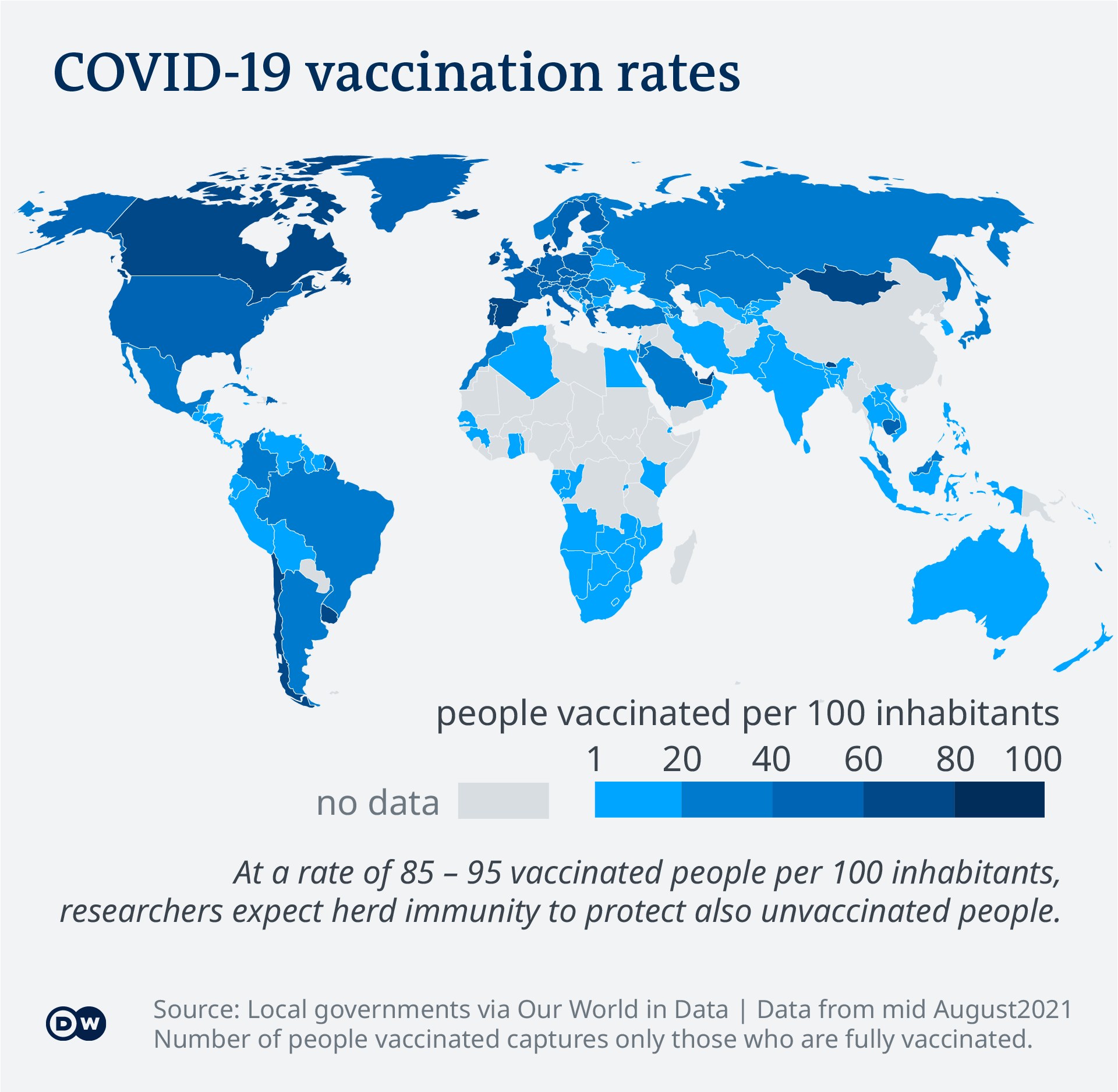 And while it previously took decades to develop a vaccine, the first COVID-19 vaccine was available after just one year. "Every single pandemic pushes science, medicine and health systems forward," said Gauert.

But those developments do not occur at the same rate everywhere. Even during the COVID pandemic, there has been a massive gap between rich and poor countries, as DW's graphic on vaccination progress shows.

'Don't forget to wash your hands!'

Still, everyone can contribute to the fight against viruses and bacteria.

As a child, it used to annoy me when I rushed hungrily to the dinner table and was admonished by my grandma with a firm, "Don't forget to wash your hands!" Today, during the current pandemic, I heed her hygiene principles more conscientiously than ever.

Opinion: Sweden continues to stand out on COVID-19 strategy

While strict rules still apply elsewhere, Sweden is lifting all coronavirus restrictions. The country has always charted its own, distinctive course when it comes to tackling the pandemic, says DW's Miodrag Soric.

Some European countries have ditched coronavirus measures such as social distancing or vaccine pass mandate, while others are confronting a surge in infection rates.