From the Arc de Triomphe to Gdansk, Europe celebrates

With moments of memory or military pomp, Europe is marking 70 years since defeating the Nazis in a war that changed the continent forever. The observations began overnight in Poland and will continue through the weekend. 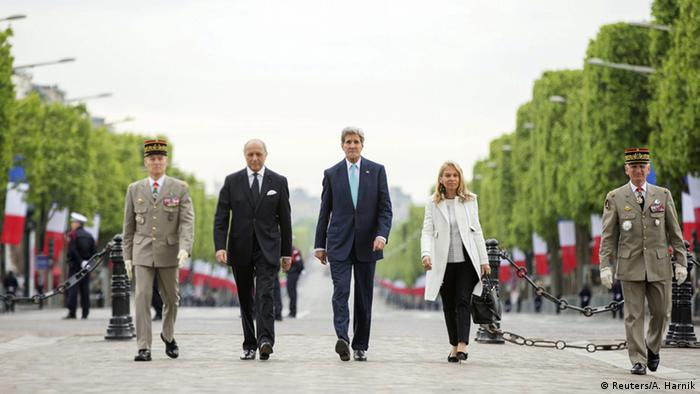 In Paris, US Secretary of State John Kerry (second-right in photo) joined Foreign Minister Laurent Fabius (second-left) and President Francois Hollande in a procession to the Arc de Triomphe. The Czech town of Pilsen is hosting a week's worth of festivities. A frequently divided Europe is celebrating 70 years since the May 8, 1945, Allied defeat of Nazi Germany in World War II.

"With this signature, the German people and armed forces are for better or worse delivered into the victor's hands," Alfred Jodl - a general in Adolf Hitler's army until the dictator killed himself a week before - said after signing the Nazis' surrender in 1945. "In this war, which has lasted more than five years, both have achieved and suffered more than perhaps any other people in the world."

A previously unthinkable number of people died in Europe during World War II - 8 million Germans, 5.6 million Poles, 24 million Soviets, plus over 6 million European Jews - many of them at the hands of the Nazis and their collaborators. The war killed 60 million in Europe and Asia, an estimated 45 million of them civilians.

In Germany, where Victory in Europe Day is not a holiday, the Bundestag and Bundesrat met Friday for a joint observance.

Late Thursday and early Friday, the leaders of several Baltic nations, the Czech Republic, Slovakia, Romania, Spain, Bulgaria, Cyprus and Croatia - all EU members now and all of which were occupied by Nazis or ruled by leaders allied with them - gathered in Gdansk, where Germany invaded Poland in 1939. Poles consider May 8, known across the continent as Victory in Europe Day, as their liberation from the Nazis and the start of four decades of Soviet occupation.

Because it was past midnight in Moscow when the formal treaty was signed in Berlin, many former Soviet nations celebrate their liberation May 9. Russia will celebrate the wartime feats of the Soviet Union under Josef Stalin on Saturday in a ceremony that has caused diplomatic tensions because of the country's alleged support of separatists in Ukraine's civil war and annexing the Crimean Peninsula in 2014.

Tensions have risen between Poland and Russia recently, and officials intended festivities in Gdansk to serve as an alternative to Moscow's. Ukrainian President Petro Poroshenko was in attendance, as was UN Secretary-General Ban Ki-moon. Polish President Bronislaw Komorowski managed a dig at Russia during Thursday's ceremony, comparing the expansionism practiced by Vladimir Putin to the Nazis' march on Europe.

"This is something that hasn't been practiced since 1939," Komorowski said. "There can be no acceptance of such a practice."

On Thursday, German and Russian officials laid wreaths for Red Army soldiers killed in the Battle of Stalingrad.