A friend has testified that Oscar Pistorius twice fired a gun in public, months before shooting his girlfriend to death. A forensic scientist has also testified against Pistorius in the South African court. 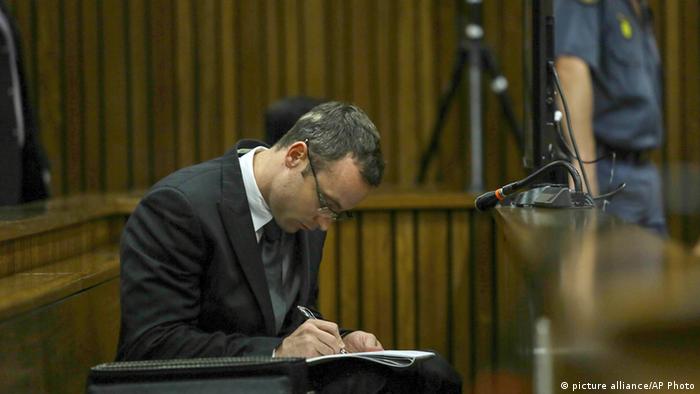 Pistorius' Friend Darren Fresco testified on Tuesday that in 2012 he was driving with the Olympic sprinter in the passenger seat and the Paralympian's then girlfriend, Samantha Taylor, in the back.

Without warning, he said, the athlete fired a gun through the sunroof. Fresco testified that Pistorius had become angry after a traffic officer who pulled the car over for speeding had touched his gun, which lay on the passenger seat.

"Then there was an altercation, a verbal altercation between the accused and the metro police officer," Fresco testified. "You can't just touched another man's gun," Fresco said Pistorius told the police officer angrily. "Now your fingerprints are all over the gun, so once something happens you are going to be liable," Pistorius said, according to Fresco's testimony.

When they resumed driving, "he shot out of the sunroof," Fresco testified. "Once I'd flinched over to the right-hand side of the vehicle... I saw the weapon being brought back into the car through the sunroof."

Fresco also testified about a shooting incident at Tashas restaurant in January 2013, when his gun went off while Pistorius inspected it. A bullet slightly grazed the toe of another friend, the boxer Kevin Lerena, who testified last Wednesday. Pistorius then asked Fresco to take the blame, which he agreed to do.

"Instantly he passed the weapon back to me, under the table, and he said: 'Please, there's too much media hype around me at the moment, please can you take the rap?'" Fresco testified on Tuesday.

Pistorius has admitted killing his girlfriend Reeva Steenkamp in his Pretoria home on Valentine's Day 2013, shooting the 29-year-old model and law graduate through a closed bathroom door. He has pleaded not guilty, claiming he mistook her for a burglar, though the prosecution alleges that he killed her deliberately after an argument.

He also faces two counts of firing a gun in public and one for possession of unlicensed ammunition. The 27-year-old double amputee has pleaded not guilty to all four charges.

Steenkamp could not have screamed after Pistorius fatally shot her in the head, a forensic expert testified on Tuesday. Gert Saayman contradicted several neighbors who said they heard a woman scream before and after the shots

Saayman said, however, that Steenkamp could have screamed after the first bullets hit her in the hip and elbow and only would have gone silent after the final and fatal shot. The pathologist said he had conducted between 10,000 and 15,000 autopsies over 30 years.

The forensic expert has asserted that, judging by the food contents in her stomach, Steenkamp probably last ate no more than two hours before her death. Pistorius shot her after 3 a.m., meaning that she must have eaten after 1 a.m., though the athlete has said the couple had gone to bed by 10 p.m. When Saayman testified on Monday, Pistorius covered his ears and vomited.