Fresh fighting in Aleppo as ceasefire ends without evacuations

Heavy clashes have erupted in Aleppo as a three-day Russian ceasefire ended without the evacuation of civilians or rebel fighters. The warring sides are preparing for a final battle over the city. 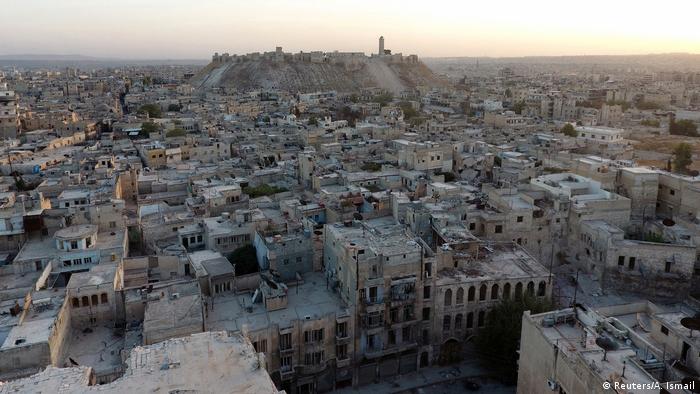 An EU plan to threaten Russia with sanctions for its part in attacks on Aleppo was put on hold. (21.10.2016)

On Syria, Russia digs in for the long haul with 'indefinite' deployment

Russia has approved a law ratifying Moscow's deal with Syria to deploy its forces in the country indefinitely. This paves the way for permanent Russian military bases in the Middle East as Assad vows to defeat rebels. (14.10.2016)

Fierce clashes and airstrikes resumed in Aleppo on Saturday after a three-day unilateral Russian ceasefire expired, a monitoring group said, as the Kremlin vowed to "liberate" Syria of terrorists.

Russia implemented a ceasefire in Aleppo on Thursday that was extended to Saturday, in what it said was intended to allow civilians and rebels fighters to evacuate from the eastern part of the city, under siege since July.

The UK-based Syrian Observatory for Human Rights said airstrikes resumed on Saturday as gunfire and artillery exchanges intensified along the front lines.

Citing a lack of security guarantees, the United Nations said it was unable to provide aid to the rebel-held parts of city or evacuate civilians during the three-day ceasefire.

"The UN remains hopeful that parties will provide all necessary guarantees and is actively working to that end," said UN humanitarian spokesman Jens Laerke.

Rebels did not agree to the ceasefire, which they said failed to provide assurances rebels or civilians would not be arrested and did not allow for humanitarian aid to reach those in besieged areas.

The Syrian regime had set up eight corridors under a plan that would have involved the UN bringing rebels and civilians to rebel-controlled Idlib province, Turkey or areas under control of Turkish-backed rebels in northern Aleppo province.

Russia and Syria accused the rebels of blocking civilians from leaving and preparing an offensive to break the siege. They say their forces are targeting the al-Qaeda linked Fatah al-Sham Front, formerly known as the Nusra Front.

The opposition accuses Russia and Syria of indiscriminately targeting civilians in a brutal offensive to retake Aleppo that has killed at least 500 people and wounded another 2,000 since September. No outside aid has reached the city since July, and stocks of basic necessities are running low.

Talks between the United States and Russia in recent months have focused on providing humanitarian aid and on separating al-Qaeda linked groups from the so-called moderate opposition backed by the West, Turkey and Gulf Arab states.

Speaking in a televised interview on Saturday, Kremlin spokesman Dmitry Peskov said Russia would do everything to rid Syria of "terrorists."

"The territory of Syria must be liberated," Peskov said. "It must be liberated and everything must be done to prevent the country's breakup, which could have catastrophic consequences for the entire region."

"Some countries are trying to play with the devil and use terrorists to get rid of [Syrian President Bashar al] Assad, and some just say thoughtlessly that Assad must leave," Peskov said. "If Damascus falls and terrorists take hold there, there will be no political settlement then."

Russia has been under mounting pressure to put a halt to fighting around Aleppo, the country's second largest city before the war and a center of the rebel opposition. On Friday, the UN Human Rights Council voted for an investigation into possible war crimes in the city by "the Syrian authorities and their allies."

The Syrian regime - backed by Russia, Iran's Revolutionary Guards and Shiite militias - views Aleppo as a major battle that will break the back of the armed opposition and turn the tide of the six-year war in its favor.