The French Consulate in Shanghai has urged French citizens to keep alert after a Frenchman was stabbed in the city. The attack came after a Chinese man was killed by a police officer in Paris, sparking violent protests. 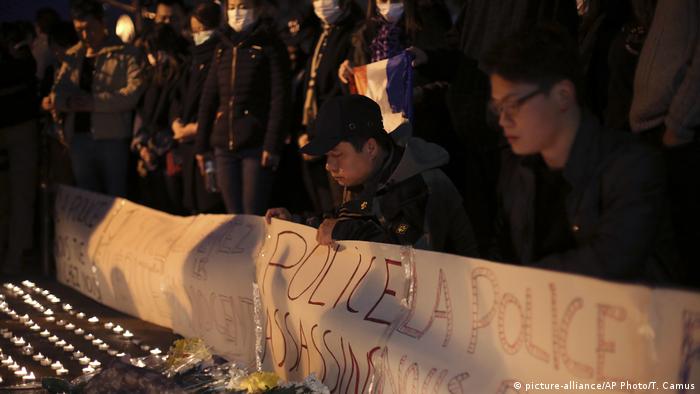 The French Consulate in Shanghai on Friday urged French citizens in the city to exercise extra vigilance after revealing that a Frenchman was stabbed in the city this week.

While the circumstances surrounding Wednesday's "violent assault" remain unknown, it came just four days after a Chinese man was killed in Paris by a police officer.His death has sparked a series of violent protests in the French capital by members of the Chinese community. The incidents have also strained Sino-French relations after China's Foreign Ministry on Tuesday summoned a representative from the French Embassy.

Following the stabbing in Shanghai this week, the French Consulate reported that the attacker was apprehended by police soon after the incident and placed into custody. The victim was slightly injured on his neck, according to the police department of Shanghai's Xuhui district

"Given the situation, the French Embassy in China calls on members of the French community to exercise the utmost vigilance," the statement said," the consulate said in a statement, adding that it was following the investigation closely.

Protests in Paris and diplomatic tensions

The protests follow an incident on Sunday that saw French police shoot dead a Chinese national in his apartment in front of his family. The police officer had been called to the scene to investigate an alleged altercation with a neighbor. Paris authorities maintain that the man attacked the policeman with a knife.

However, lawyer Calvin Job said the family of the dead man "totally disputes this version of events," saying that the man, a father of four, had been trimming fish with the scissors when police came to the door.

France's Chinese population has routinely accused the police of not doing enough to protect them from racism, as well as the media of neglecting their plight.

Sino-French relations in the spotlight

The case has put pressure on diplomatic relations between France and China. Aside from summoning the French diplomat in Beijing, China's foreign ministry has also demanded that France better protect "the security and rights" of its national citizens. They also asked that French authorities thoroughly investigate to "shed light on this case."

France's foreign ministry responded that the safety of Chinese people in the country was a high national priority.

France is among the biggest investors in China's economy. Both sides are reluctant to see relations sour.