Three suspects have been named in the attack on humor magazine Charlie Hebdo. A police operation is underway in the northeastern city of Reims to apprehend the gunmen. 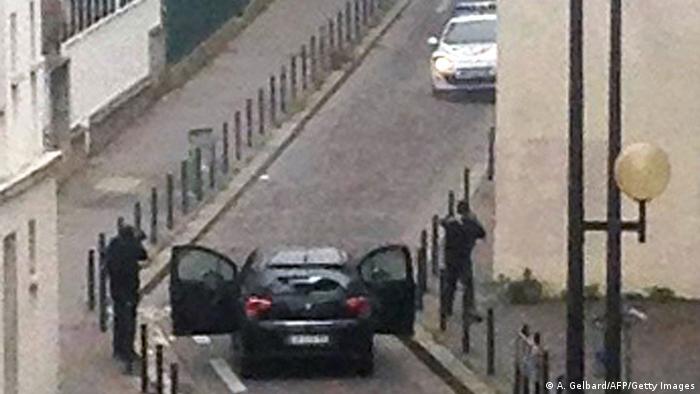 French police have identified three men as suspects in Wednesday's massacre at the offices of Parisian satirical magazine, Charlie Hebdo. The Associated Press (AP) reported that two officials named the suspects as Cherif and Said Kouachi, brothers in their 30s, both Frenchmen, and Hamyd Mourad, also a French citizen.

The news came as a raid on a building in the northern city of Reims got underway. Police ordered journalists to stay clear in case there was a shoot-out. The French police's special RAID anti-terrorism unit is leading the operation to arrest the suspects.

One police official who named the suspects also told AP that the men were linked to a Yemeni terrorist organization, which corroborates an earlier witness statement that said the men shouted, "You can tell the media that it's al Qaeda in Yemen," to onlookers.

Kouachi has been convicted of promoting terrorism before. In 2008 he was sentenced to 18 months in prison for helping facilitate fighters for the Iraqi insurgency. He told the court he was motivated by outrage at images of Americans torturing prisoners at Abu Ghraib prison.

Global show of solidarity for France's worst massacre in decades

Kouachi, his brother, and Mourad stormed the office of the humor magazine around midday, in a military-style raid that left 12 dead, including the editor-in-chief Stephane Charbonnier, and famous cartoonist Jean Cabut, along with Georges Wolinski and Bernhard Verlhac, known by the pseudonym Tignous. Two policemen were also killed in the attack.

The magazine had recently published an issue mocking "Islamic State" (IS) and its leader, Abu Bakr al-Baghdadi.

Charlie Hebdo was no stranger to threats and attacks from Islamists – after a 2011 issue "guest edited" by the Prophet Muhammad, their offices in Paris' 11th arrondissement were firebombed.

On top of an outpouring of sympathy and support from world leaders, other journalists and cartoonists are showing their solidarity.

Danish newspaper Berlingske's Thursday edition will feature cartoons from the magazine, among them one illustration featuring the Prophet Muhammad. The managing editor of Italy's Corriere della Sera confirmed that his daily will also republish Charlie Hebdo cartoons.

French President Francois Hollande has announced that the country will hold a day of mourning on Thursday. The decision comes after a fatal gun attack on satirical magazine Charlie Hebdo which has left 12 people dead. (07.01.2015)