French President Emmanuel Macron's LREM party has won a large majority in parliamentary elections, which will enable it to push through reforms. But turnout hit a record low.

Macron's year-old La Republique en Marche (Republic on the Move, LREM) and MoDem allies were set to win between 350 and 361 seats in the 577-seat National Assembly, based on partial results after the second round of the legislative elections announced shortly after midnight. Before voting closed, pollsters had predicted LREM would win between 400 and 470 seats.

Macron's success was marked by a record-low turnout of just under 44 percent. 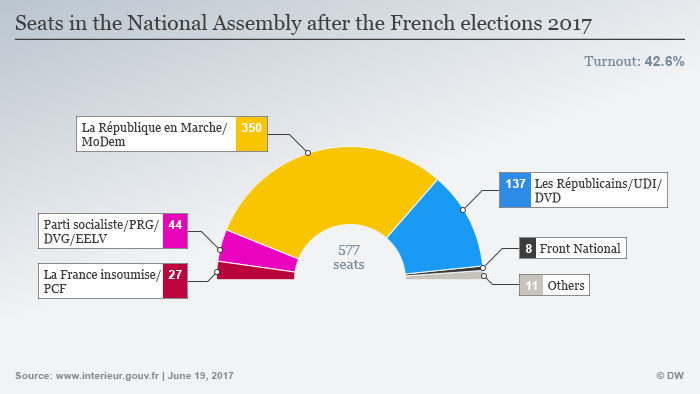 Following the initial results, French Prime Minister Edouard Philippe said the voters had given a clear majority to President Macron, and that his government was "humbled and determined" after securing a victory in the polls.

Philippe also said the diversity of new lawmakers was a good sign for France. "This majority will have a mission: to work for France," the PM said. "With their vote, the French have, by a wide majority, chosen hope over rage, optimism over pessimism, confidence over withdrawal."

German Chancellor Angela Merkel was among the first to congratulate Macron. She lauded him for winning a "clear parliamentary majority" in elections Sunday, government spokesman Steffen Seibert said. Seibert added, in a tweet, that Merkel wished for "further good cooperation for Germany, France, Europe."

Foreign Minister Sigmar Gabriel was quoted on Twitter by his ministry as saying "the road is clear for reforms, in France and in Europe."

Far-right leader Marine Le Pen, who lost to Macron in the presidential election, won a seat in parliament for the first time, her National Front party confirmed. She won her northern constituency of Henin-Beaumont with a large majority and said she would "fight with all necessary means the harmful projects of the government."

Projections showed the conservative Republicans and their allies to be the largest opposition group with 97-133 seats, while the Socialist Party and its partners will secure 29-49 seats.

Le Pen's National Front may get four to eight seats, but the party looked set to fall well short of its 15-seat target, which would allow it to form a parliamentary group and benefit from privileges. "It is absolutely scandalous that a movement such as ours, which won ... 3 million votes in the first round of these legislative elections, cannot form a group in the National Assembly," Le Pen said.

Jean-Christophe Cambadelis, the secretary-general of the Socialist Party, announced his resignation from the party leadership, saying "the defeat of the left" in the election "cannot be overlooked." He said the Socialist Party needed to change its ideas and its organization and that a "collective leadership" would replace him.

The voter turnout on Sunday was lower than expected, with the final turnout estimated at between 42 and 43 percent. By midday Sunday, only 17.75 percent of voters had cast a ballot, down from the 21.41 percent recorded at the same time of day during the 2012 parliamentary runoff vote.

- Emmanuel Macron's storming of the Bastille 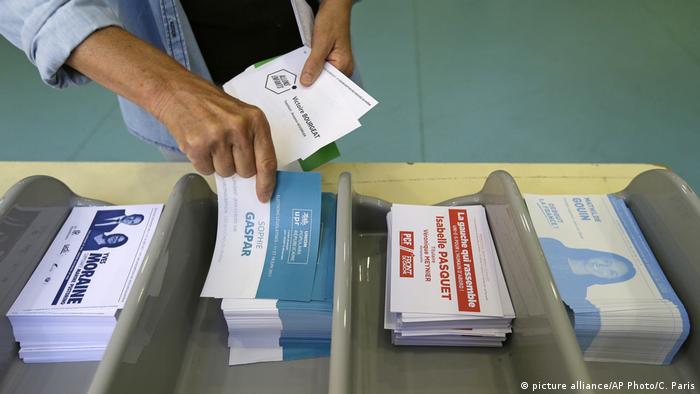 A mandate to push through reforms

The result means that Macron should be able to push through both Prime Minister Philippe's government as well as proposed liberalizing reforms that are opposed by both parties on the left and the far-right National Front.

"From this evening, it is time for the presidential majority to get to work," the prime minister said. "This majority will be united behind the government to put the president's program into action."

Rival parties spent the last week trying to motivate their supporters, alerting them to the risks of a presidential supermajority.

A sizeable parliamentary majority remains likely for President Emmanuel Macron, according to a new survey. Already, his centrist LREM party is leading in 10 out of 11 constituencies among French voters abroad. (06.06.2017)