Emmanuel Macron offered to add a special mention of Corsica in the French constitution. But the nationalists, demanding more autonomy, termed his trip to the Mediterranean island a "missed opportunity." 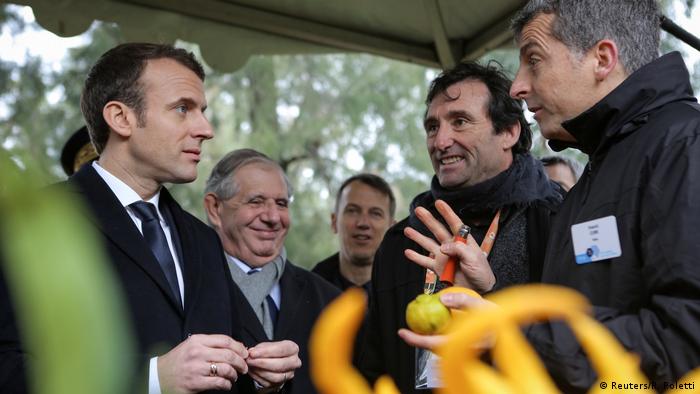 French President Emmanuel Macron on Wednesday gave little ground to Corsica's nationalist politicians on several of their demands for greater autonomy, including recognition for the local language.

Addressing the nationalists during his two-day visit to the Mediterranean island, Macron offered to add a special mention of Corsica into the French constitution, one of their long-standing demands.

"I want us to open a new chapter of our history," Macron told Corsican officials. "I want everyone in the [French] Republic to be able to claim their identity, their specificity. But if this specificity is to be the Republic's enemy, then it's an error and I cannot accept it."

But Macron ruled out giving the Corsican language an official status and another nationalist demand related to property purchases by non-residents.

"The President of the Republic could have shown himself to be a capable statesman, anchoring peace, building reconciliation and creating conditions for a calm dialogue taking into account this people's aspirations and interests," said Gilles Simeoni, the head of the regional government.

"He didn't do it. We consider that it is a missed opportunity," he added.

Corsicans between nationalism and tolerance

Corsica's nationalist leaders, who won a resounding majority in December, have been pushing for greater autonomy from Paris.

Their demands include an equal status for the French and Corsican languages, preferential access to the property market for locals and the release of Corsicans jailed for pro-independence violence.

Corsica, home to some 330,000 people, witnessed a violent militant campaign waged by separatists for 40 years before they laid down their weapons in 2014 to seek change through the ballot box.

Prior to becoming part of France in the 18th century, Corsica, birthplace of French emperor Napoleon Bonaparte, was ruled for centuries by the Republic of Genoa in what is now Italy. The historic connection to Italy is a reason why the local language is similar to Italian and the local culture has Italian elements.

Macron already on Tuesday rejected demands for amnesty for the so-called jailed Corsican political prisoners, prompting Simeoni and another local elected leader, Jean-Guy Talamoni, to boycott a working lunch on Wednesday with the French president.

But the two leaders attended Macron's main policy speech later in the day. Neither man applauded at the end of the speech.

"It's a sad night for Corsica," said Talamoni, adding he was "dismayed by the level of responses" given by Macron.

French President Macron has arrived on Corsica for a two-day visit aimed at easing tensions between the Mediterranean island and the mainland. Nationalists bolstered by political gains want more autonomy for the region. (06.02.2018)

A criminal trial in Corsica has concluded over a beach brawl that reportedly erupted over Muslim women clad in burkini swimwear. The ensuing melee prompted the local mayor to controversially ban the modest swimsuit. (16.09.2016)

Ahead of a visit by President Emmanuel Macron, thousands of Corsican nationalists took to the streets calling for more autonomy for the French island. Paris has said previously it is open to changes in its relationship. (04.02.2018)