In Corsica, a language breeds controversy | Europe | News and current affairs from around the continent | DW | 03.09.2016

In Corsica, a language breeds controversy

On the French Mediterranean island of Corsica, language has become a political lightening rod following demands by nationalist lawmakers to put Corsican on equal footing with French. Elizabeth Bryant reports. 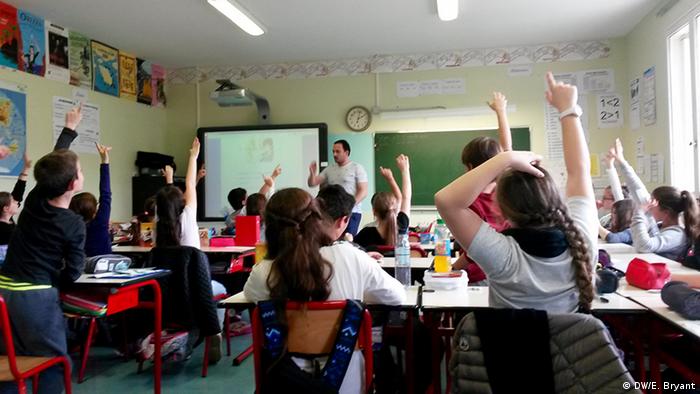 Perched high over a large graveyard in this eastern port city, Ecole Subissi too has an eye on the past. Students in this primary school are learning the language of their forefathers: not French, but Corsican.

On a sunny afternoon, a classroom of fifth-graders are going through sentences in Corsu, as the language is known on this Mediterranean island, coached by teacher Jean-Marc Taddei.

Corsicans between nationalism and tolerance

"You need to know where you come from, you need to know your roots," Taddei says later, describing how he learned Corsican orally at his father's bar in the central city of Corte. "The idea is for these children to continue all the way through high school - to save the language so it doesn't die out."

His sentiments echo a broader Corsican longing to revive an ancient tongue closely related to Italian. Those goals are not without controversy. Indeed, Corsican has become a political lightening rod, after a coalition of hard-line separatists and more moderate "autonomists" won regional elections for the first time last December.

Now the local government is calling for Corsican to be on co-official status with French here, a demand tartly rejected by the French government.

"The Republic has one official language - French," Socialist Prime Minister Manuel Valls riposted in a July address to the Corsican assembly. 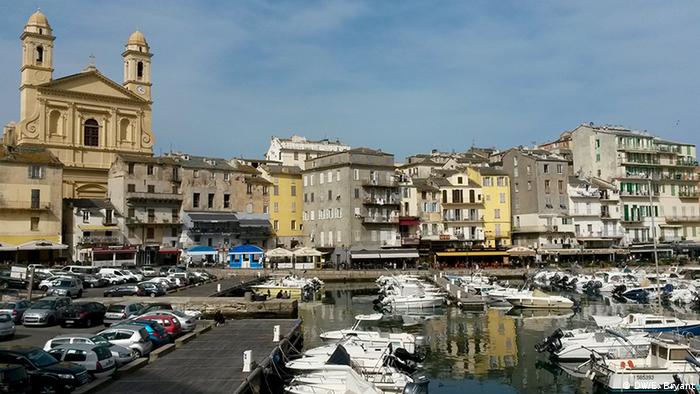 Still, linguistic aspirations are unlikely to die on this rugged island, where goats still cross country roads at will, and where today roughly one in three children studies Corsican. Indeed, regional identity movements here and elsewhere in Europe have earned a second wind with Britain's vote in June to leave the European Union.

"Europe of tomorrow will be a Europe of regions," predicts Bastia's mayor Pierre Savelli. "We need to rethink our relations with France - and Italy - and construct the Europe that we need. If not, the Corsican language won't count for much."

No spitting or speaking Corsican

He hands over a copy of decades-old rules, once posted in every school of Corsica. The first: Students are forbidden from speaking the Corsican language and spitting on the floor.

"I am part of the last generation that learned Corsican when it was a banned language," says 57-year-old Savelli, speaking from his office overlooking Bastia's port, where ferries daily discharge hordes of French and Italian tourists. "We weren't allowed to speak Corsican in schools. The parents spoke it when they didn't want us to know what they were saying."

Paris has since relaxed its centralized grip on matters from spitting to solar energy. Regions like Brittany and the Basque country are also reviving old languages - a pattern reflected across Europe, amid a broader assertion of local identity. 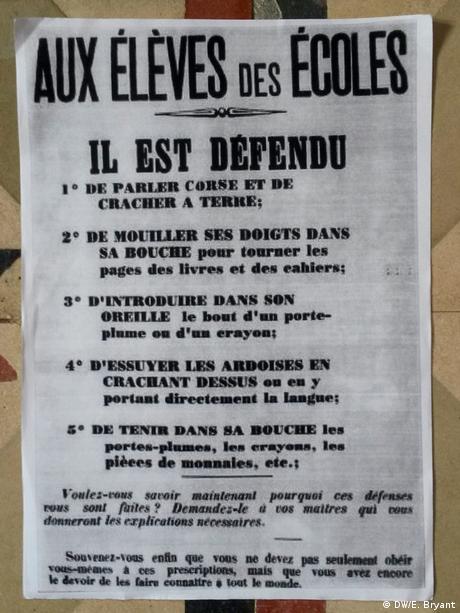 The poster says pupils may not speak Corsican

"A man must never forget his roots - his culture, his lifestyle, his language," says Paris-based publisher Jean Picollec, a die-hard Breton nationalist who was similarly banned from speaking Brittany's language growing up.

But Corsica has gone further than other French regions. The island's new assembly leader, Jean-Guy Talamoni, stirred shockwaves by delivering his inaugural address entirely in Corsican.

The island "is not just a piece of another country, but a nation, with its language, its culture, its political tradition," he said, flanked by Corsica's flag, to cheering supporters.

Still, analysts and even island residents note the limits behind the soaring prose.

"The question of independence isn't even up for discussion," said Andre Fazi, a political scientist at the University of Corsica. "The goal is to open a framework for discussion with the national government."

Corsican businessman Vincent Orabona is more interested in results. "It's great to worry about the Corsican language and culture, but there are also lots of economic problems," he says.

A problem with Corsica

On the mainland, many French greet the nationalists' discourse with a shrug of exasperation. To its toughest critics, Corsica has earned a reputation as a beautiful vacation spot filled with slackers and bandits. The strong sense of local identity carries other dark fallout, seen in several attacks against Muslim immigrants. A 2012 IFOP poll found 30 percent of French surveyed would not be against Corsican independence - if only to remove a nagging headache.

"French public opinion has a problem with Corsica," Fazi acknowledged. "I don't think it's gotten better over the years."

Not surprisingly, people here see things differently. Napoleon may be Corsica's best-known export, but on an island washed by centuries of invasions, it is Pascal Paoli who is the local hero. The 18th-century statesman rebelled against Genoese rule, opening a brief period of quasi-independence until the island was sold to France. 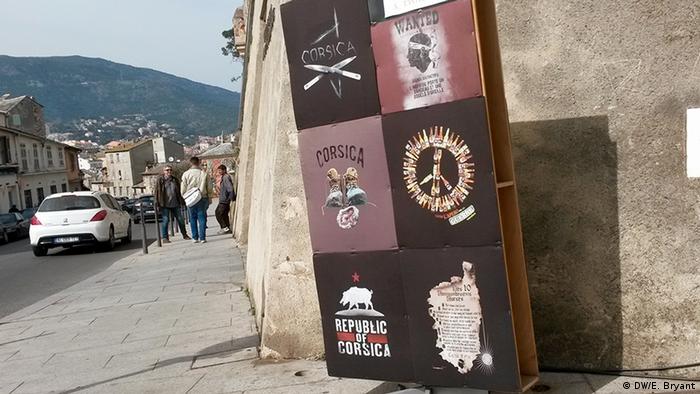 Nationalism resurged with a vengeance in the 1970s, with a campaign of shootings and bombings targeting government buildings and police. In 1998, the main separatist group, the armed National Front for the Liberation of Corsica, or FLNC, assassinated Prefect Claude Erignac, the highest French official in Corsica.

"The struggle is over and done with," says Mayor Savelli, who helped to found a student independence movement in the 1970s with nationalist leader Talamoni. "We can't construct anything without peace."

A moderate, who supports greater autonomy but not full independence from France, Savelli believes it's just a matter of time before the Corsican language earns equal status here with French. But he is not waiting for a change of heart from Paris.

The city hall offers morning language classes to its employees. Bastia will separately pilot a new Corsican currency, aimed to boost the local economy and eventually, the mayor hopes, be rolled out island-wide.

"We've worked hard to prevent the disappearance of the Corsican language," he says. "But only with co-officiality, will it be used in daily life. If it's confined to language tapes, it is dead."

That sentiment is shared by Jose Ersa, principal of Subissi primary school. The school is still among the minority in Corsica to be fully bilingual.

"We're trying to take the language out of the school and insert it into society," Ersa says. "It's important that it not only survives, but that it lives."

Amir-Moazami: 'France does not have a homogeneous mainstream culture'

The sociologist Schirin Amir-Moazami finds the French burkini debate superficial. She says France has not confronted its colonialist past and that is why its significance has been overlooked today. (28.08.2016)

Corsica's regional assembly has demanded that Paris closed "radical" mosques on the French island, according to the news agency AFP. Corsica's resolution follows persistent jihadist attacks on the French mainland. (29.07.2016)

It's been quite a post-Brexit week for Scotland. First Minister Nicola Sturgeon has been pushing the pro-EU case at home and in Brussels, but there remains a long way to go, as Peter Geoghegan reports from Glasgow. (01.07.2016)