Corsica's regional assembly has demanded that Paris closed "radical" mosques on the French island, according to the news agency AFP. Corsica's resolution follows persistent jihadist attacks on the French mainland. 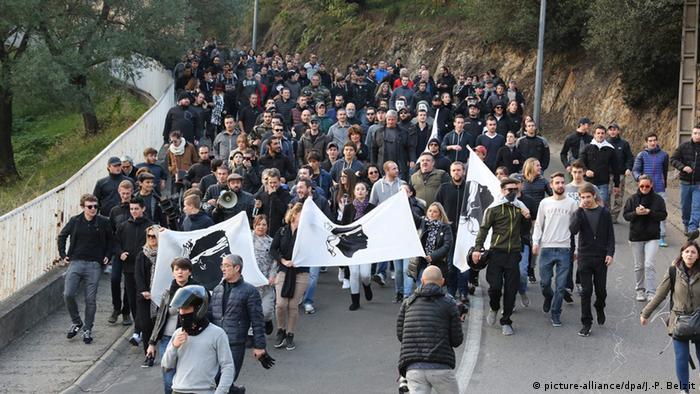 The French news agency said Corsican lawmakers from the nationalist, left- and right-wing parties adopted the resolution, with only three communists abstaining.

It call for immediate closure on Corsica "of prayer or meeting places that act as centers of radicalization or where hateful speeches are made, creating an atmosphere that is favorable to violence."

The text also called for tighter security measures on the tourist session island.

The motion follows a warning Thursday from a splinter group of the nationalist Corsican National Liberation Front (FLNC) that it was ready to respond to any attack on the island by extremist Islamists "without any qualms."

The FLNC also urged "Muslims in Corsica" to denounced radical Islamism and inform authorities on "disaffected youths," claiming that Paris already knew "who the Salafists in Corsica are.

Muslim prayer halls have twice been attacked in Ajaccio, the island's capital, over the past year.

In December, a prayer venue was vandalized after an assault on firefighters that prompted anti-Arab protests (pictured above).

A prayer hall blaze in late April was described by prosecutors as deliberate arson.

At that time, French President urged Corsicans that "any anti-religious act must not be tolerated" while Interior Minister Bernard Cazeneuve vowed "solidarity with Muslims on Corsica."

France is reeling from a string of attacks. On 14 July, a resident Tunisian ploughed a truck into crowds leaving a fireworks display in Riviera city of Nice.

On Tuesday, two 19-year-old jihadists murdered a priest at mass in northern France by slashing his throat. Responsibility was claimed by "Islamic State" (IS), the movement notorious for its brutality in Syria and Iraq.

Corsica's daily newspaper "Corse Matin" said FLNC in its statement has told adherents of "Daesh," the Arabic word for "Islamic State," that "your medieval philosophy does not scare us."

Prosecutors say the fire at the prayer hall in the capital, Ajaccio, was probably a criminal act. The French Mediterranean island experienced days of anti-Arab riots over Christmas. (01.05.2016)