French President Macron has said France wants to mediate between Turkey and Kurdish-dominated Syrian Democratic Forces in northern Syria. But Turkey has rejected the idea, calling the Kurdish militia a "terrorist" group. 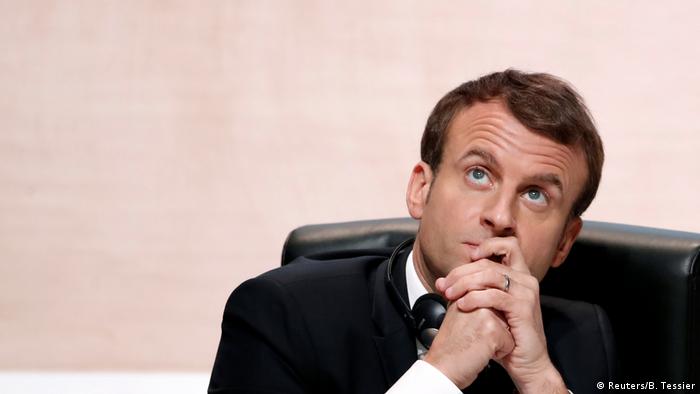 French President Emmanuel Macron on Thursday promised he would send French troops to the northern Syrian town of Manbij to bolster the fight against ‘Islamic State' (IS), the presidential office said in a statement.

Macron also sought to dissuade Turkey from advancing on Manbij, Khaled Eissa, a Kurdish official based in Paris, told reporters.

Meeting a delegation from northern Syria including the Kurdish Peoples' Protection Units (YPG), a part of the Kurdish-dominated Syrian Democratic Forces (SDF), Macron said he hoped "a dialogue can be established between the SDF and Turkey with help from France and the international community."

This was the first visit of delegates from Rojava officials to the Elysee.

The Democratic Federation of Northern Syria (DFNS) is commonly known as Rojava, an autonomous Kurdish region in northern Syria.

Presidential spokesman, Ibrahim Kalin, wrote on Twitter that Ankara rejected "any efforts to promote 'dialogue,' 'contact' or 'mediation' between Turkey and those terrorist organizations."

He also warned Paris against taking any steps that could be seen as a legitimation of "terror groups."

Turkey sees the SDF as a security threat because of its alleged links to the Kurdistan Workers Party (PKK), which has waged an armed campaign against Ankara since 1984 in which 40,000 people have died.

Read more: With Turkey’s offensive into Afrin, Erdogan is seeking to kill two birds with one stone

Sending French troops to Manbij would reinforce US forces in the city and block a possible Turkish offensive.

US forces have an outpost in Manbij, under the control of the Kurdish-backed Manbij Military Council. US officials have said they have no intention of leaving Manbij, although US President Donald Trump said on Thursday that the US will leave Syria "very soon."

Turkey recently seized the Syrian Kurdish city of Afrin driving out a Kurdish militia that Ankara views as a terrorist group.

Erdogan was informed of the visit by France's ambassador in Ankara, Le Parisien reported.

Foreign Minister Jean-Yves Le Drian has said it is very likely the Syrian army used chlorine gas in its six-year war with rebels. Paris' top diplomat warned Turkey not to add to the conflict with its Afrin onslaught. (07.02.2018)

Opinion: The twisted logic of the war in Syria

It is becoming increasingly clear that the war in Syria defies all logic. It is driven by cynical rivals who use short-term tactics without pursuing any long-term strategies, says DW’s Kersten Knipp. (21.02.2018)

Turkish forces have ousted the Kurdish YPG militia from the Syrian enclave of Afrin, a week after they captured the main town that bears the same name. The military is now sweeping for mines to allow residents to return. (25.03.2018)