Some 200 police officers have raided the headquarters of a Shiite Islamic association near the port city of Dunkirk. Meanwhile, France has frozen Iranian state assets after a June bomb plot. 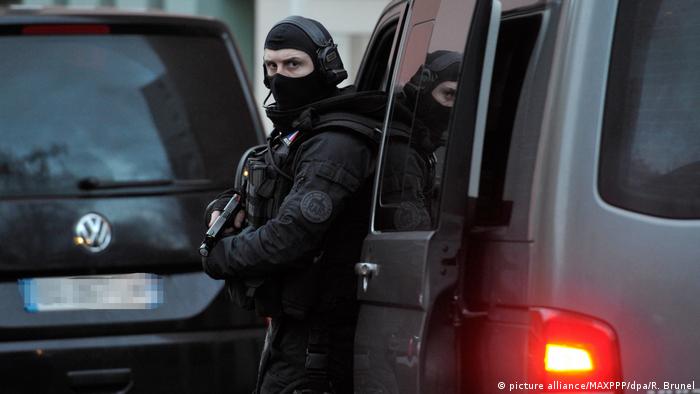 French authorities raided the headquarters of an Islamic Shiite association and the homes of its leaders near the northern city of Dunkirk during the early hours of Tuesday morning.

According to regional officials, raids on the Zahra Centre France and about a dozen homes were staged as part of the "prevention of terrorism" procedures. The association's leaders are suspected of supporting terrorist organizations, security sources said.

Eleven people were arrested in the pre-dawn raids according to news agency AFP, three of whom face charges for illegal possession of firearms.  The center's assets have also been frozen.

Police said they had been closely monitoring the activities of the Zahra Centre "because of the strong support by its leaders for several terrorist organizations and in favor of movements backing ideas that are contrary to the values" of France.

The group's leader, Yahia Gouasmi, is known for his anti-Zionist views and ties to Iran.

The small town of Grande-Synthe, where the Zahra Centre is based, is a magnet for migrants trying to cross the Channel into Britain and a known draw for smuggling activities.

It remained unclear whether the Tuesday's arrests were linked to a suspected plot in France back in June to attack a gathering of Iranian opposition group the National Council of Resistance of Iran (NCRI).

Police in France, Belgium and Germany have so far swooped on six people, including Iranian diplomat Assadollah Asadi, after details of the alleged plot were revealed. Also on Tuesday, France announced it had frozen assets belonging to Asadi, as well as to one other man and Iran's Ministry of Security and Intelligence.

"In taking this decision, France underlines its determination to fight against terrorism in all its forms, particularly on its own territory," France's interior, foreign and economy ministers said in a joint statement.

France, home to Europe's largest Muslim population, remains on high alert following a wave of Islamist attacks since 2015 that have killed close to 250 people.

The French parliament has passed a new anti-terror law as it eases its way out of the state of emergency. But civil rights campaigners say it will put citizens under general suspicion. Lisa Louis reports from Paris. (18.10.2017)