A policewoman is among six people detained in France over the murder of two police officers by an Islamist extremist, a judicial source says. Her daughter is also being questioned. 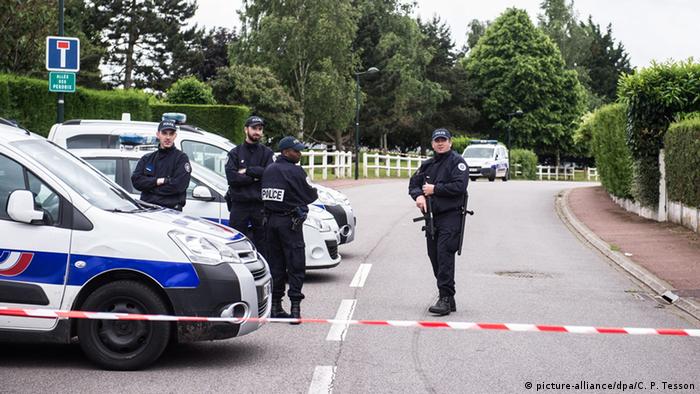 French investigators on Monday detained three men and three women, including a police woman and her daughter, for questioning over their possible role in a 2016 murder of two police officers claimed by extremist group "Islamic State" (IS), a judicial source says.

The policewoman was already interrogated in 2016 in connection with the killings in Magnanville, west of Paris, but nothing was found against her.

She attracted the notice of investigators for having hosted a young woman who was on a police watchlist for possible Islamist radicalization, which she did at the request of her daughter.

The murder of police commander Jean-Baptiste Salvaing and his partner and police colleague, Jessica Schneider, was carried out by a 25-year-old man who apparently pledged allegiance to IS just after the attack in a video that the extremist group later posted online.

The attacker was killed by police after a more than three-hour-long siege.

France has experienced a number of Islamist terrorist attacks in the past few years, most of which have been claimed by IS. More than 230 people died in such attacks in 2015 and 2016.

Most recently, a petty criminal turned jihadi killed four people in a rampage last month that ended at a supermarket. One of the victims,  gendarmerie lieutenant-colonel Arnaud Beltrame, has been hailed as a hero for having taken the place of a civilian hostage held by the gunman.