Lieutenant Colonel Arnaud Beltrame had offered himself in place of a woman whom the attacker was using as a human shield. The attacker, Redouane Lakdim, had been on a list of terror suspects since 2014. 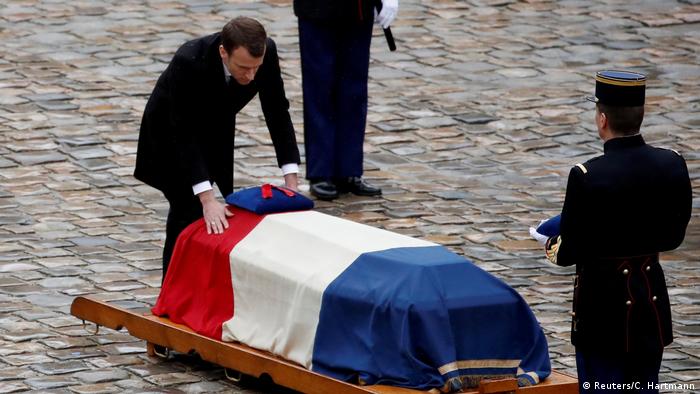 French President Emmanuel Macron on Monday said a policeman who died after offering himself as a hostage in a jihadist attack last week was "full of French resistence," as he led a national ceremony in Paris in honor of the man.

Lieutenant-Colonel Arnaud Beltrame, 44, was the last person to be killed in the shooting spree that left four people dead on March 23, in the southwestern towns of Carcassonne and Trebes.

Beltrame had taken the place of a woman who had been held as the final hostage in a supermarket by 25-year-old gunman Redouane Lakdim, who pledged allegiance to the "Islamic State" (IS) group.

Macron compared Arnaud Beltrame's actions to those of France's World War II heroes and said his example would "remain etched in French hearts."

"To accept to die so the innocent can live — that is the essence of what it means to be a soldier," Macron said. "Others, even many who are brave, would have wavered or hesitated."

He had hoped he could negotiate with the attacker once customers and staff had been cleared from the supermarket, but Lakdim shot him and slit his throat.

Macron gave the eulogy at Les Invalides, a historic complex, which is home to France's army museum and a veterans' retirement center.

About 200 of Beltrame's colleagues from the gendarmerie, a national police force, which is part of the military, attended the ceremony in Paris.

Across the country, police stations paused for a minute's silence to honor their fallen colleague.

Macron's government has been criticized by right-wing opponents who say the attack was preventable.

Lakdim had been on a list of suspected terrorists since 2014 and was being monitored. He also had previous convictions for drug use and handling a banned weapon.

Marine Le Pen, leader of the far-right National Front, accused the government of using the grief over Beltrame's death to "escape from its own incompetence and cowardice" in failing to combat Islamic extremism.

Prime Minister Edouard Philippe responded to the criticism on Tuesday in parliament saying, "Those who say ignorantly that this attack could have been avoided, those who promise people zero risk — I say to them, these people bear a heavy responsibility in speaking so casually."

In France, more than 200 people have died in jihadist attacks over the past three years.

Privacy activists hate the idea of using biometric ID software in public places. But DW's Jefferson Chase says that it's better to test whether it can help prevent terrorism and major crime than to reject it out of hand. (24.08.2017)