A man killed three people and injured others before being shot dead in what French President Macron called an "Islamist terrorist attack." A policeman who swapped places with a hostage has also died of his injuries.

Police at scene of hostage situation

French President Emmanuel Macron said Friday evening that the gunman, allegedly linked to the "Islamic State" (IS), had killed three people and wounded several others during his rampage.

The first fatality came early in the day near Carcassonne when the attacker stole a car. The two other fatalities occurred later in a supermarket in Trebes in southern France, where the perpetrator took customers and employees hostage. French police gunned down the attacker after entering the supermarket, following an hours-long standoff. 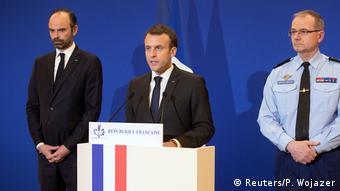 The news agency of IS, Amaq,  claimed IS responsibility for the attack. It stated that its "soldier" had acted in response to calls to target "countries of the coalition," referring to the US-led international coalition, which includes France. The coalition has been battling the terrorist group in Syria and Iraq since 2014.

"Our country has suffered an Islamist terrorist attack," Macron added in his remarks, while noting that investigators were still trying to find out whether IS was behind the attack. The president also said that investigators are looking into how the attacker obtained his gun and when he had become radicalized.

First information on the attacker

Speaking to reporters earlier in the day on Friday, French Interior Minister Gerard Collomb identified the attacker as 26-year-old Redouane Lakdim, a "small-time" drug dealer. Lakdim was "known for petty crime," Collomb said. "We followed him and we thought there was no radicalization."

Collomb added that the attacker acted alone and had been "already under surveillance when he suddenly decided to act."

According to an anonymous source cited by French broadcaster BFM TV, the attacker was demanding the release of Salah Abdeslam, the prime suspect in the 2015 Paris attacks that claimed 130 lives.

Both Macron and Collomb lauded the heroic actions of a French police officer who offered to switch places with a hostage in the Trebes supermarket and ended up suffering life-threatening injuries.

He has since died of his wounds, Collomb said on Saturday. In a tweet, Collomb said the officer, lieutenant-colonel Arnaud Beltrame, had died for his country and that France would not forget "his heroism, his bravery, his sacrifice."

Macron also paid tributes to Beltrame in a statement shortly before dawn on Saturday, saying that he "fell as a hero, giving up his life to halt the murderous escapade of a jihadi terrorist."

Beltrame remained with the armed suspect, keeping his cellphone on. This enabled officers outside the building to listen in on events inside. When they heard shots being fired, the police stormed the building, killing the gunman.

The attack began Friday morning near the city of Carcassonne, where the attacker had fired six shots at police officers who were on their way back from a run, according to the head of SGP Police-FO union, Yves Lefebvre. One police officer sustained a shoulder injury, but the injury was not serious, Lefebvre said.

Another union representative, Bruno Bartocetti, said the attacker also shot dead a person in Carcassonne before stealing the victim's car.

One security source, who asked not to be named, told French news agency AFP that a man "entered the Super U supermarket at around 11:15 a.m. and shots were heard." The source also divulged that "most of the employees and customers of the Super U managed to flee."

One of the shoppers told FranceInfo radio that some of the people had taken refuge in a cold room.

"A man shouted and fired several times. I saw a cold-room door, I asked people to come and take shelter," said the woman identified as Carole. "There were ten of us, and we stayed an hour. There were more gunshots and we went out the back door."

Local authorities closed off the area to the public. The southern town of Trebes is located some 100 kilometers (60 miles) southeast of Toulouse. 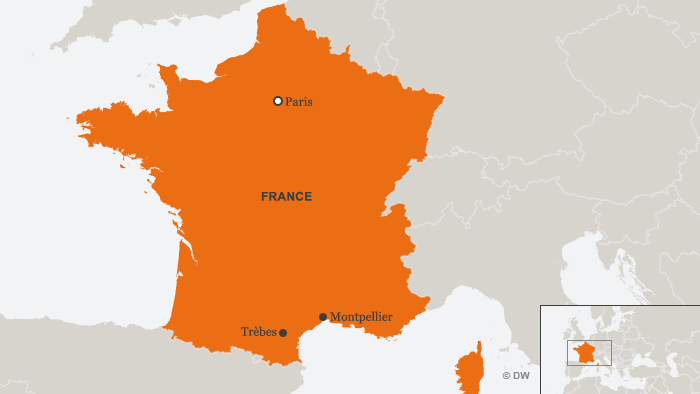 French Prime Minister Edouard Charles Philippe had initially described the situation as "very serious ... all the information we have as I speak leads us to think that this would be a terrorist act." French counterterrorism prosecutors have been put in charge of the investigation.

Macron sent Collomb to Trebes while special forces from Toulouse were deployed to the scene. Further reinforcements were reportedly deployed from Paris.

The president, who was in Brussels meeting with German Chancellor Angela Merkel at the time of the attack, assured the inhabitants of Trebes of the full solidarity and mobilization of state forces.

Merkel expressed her condolences to the victims of the Friday attack.

"When it comes to terror threats, we are standing with France," she said, according to the statement posted by her spokesman Steffen Seibert. "Wherever we can provide help and support, we will do so."

France has suffered a spate of terror attacks since 2015. Although Macron ended a state of emergency that had been in place since then, many of its provisions were enshrined into laws that left wide-ranging options for preventing further attacks.

French president, Emmanuel Macron has decided to implant into ordinary French law many of the provisions of the state of emergency signed by his predecessor Francois Hollande after terror attacks in November 2015. (01.11.2017)

Police at scene of hostage situation