Michel Houellebecq is one of the biggest stars in France's literary scene — and one of the most provocative. Fans eagerly awaited his event, where he said European culture was endangered and hoped for more French pride. 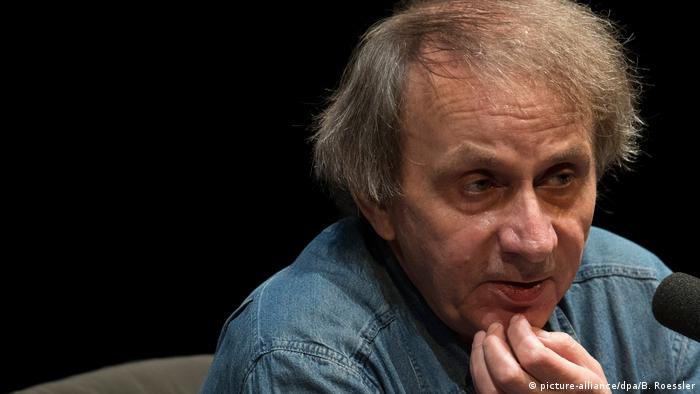 The evening at the Frankfurt theatre had long been sold-out. The venue was hosting a reading and discussion with Michel Houellebecq, and the event was the highlight of the Frankfurt Book Fair's first day.

The controversial french author onstage sat with three women: a translator, an interviewer and the evening's presenter.

The audience was ready to hear lines from his most recent novel, "Submission," which many readers regard as a trendsetting work, and which was published the day of the attack on the French satirical magazine Charlie Hebdo.

The novel is set in France, where a moderate Islamist party has won the elections and manages to bring peace to a country torn by conditions that resembled a civil war. But there's a price to pay: Western values and human rights, including gender equality, are now on the back burner. Some readers felt "Submission" was a provocation. Others saw it as a warning of a situation Western European nations just might face in the future.

Wearing a denim shirt and his trademark green parka with a fur-trimmed hood, his hair unruly, the gestures a bit clumsy, Houellebecq walked onto the stage in his inimitable fashion. 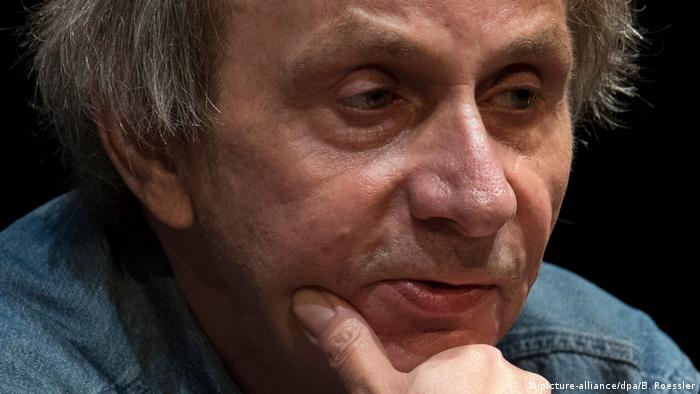 What happened next came as a surprise for the majority of the audience.

Houellebecq complimented the Germans and their organizational talents — something his fellow countrymen were not as good at. You can only compare France to Italy and Spain in that respect, the famous author mumbled. But now that Emmanuel Macron is in office, he added, there is hope for the country's national pride. He said he felt things had changed with Macron's election win, and that he hopes the French will recoup their national pride, as well as their arrogance — with the latter certainly carrying a positive connotation.

Michel Houellebecq tends to make statements with a blank look, without moving a facial muscle. Like the readers of his novels, listeners wonder how much satire or irony might be hidden between the lines. If the audience in Frankfurt was expecting the evening to take a political turn, they were in for a disappointment.

Instead, Houellebecq spoke about himself as a writer and addressed the state of European culture in general. Critics and self-proclaimed experts in France often see him as more of a sociologist or economist rather than a novelist, he said, adding he takes that as a compliment. People who criticize and judge literature are crooks anyway, he said.

Europe's culture is endangered, Houellebecq said — but not by Islam, as many would think, but by the lack of a common language. In the Middle Ages, learned people all over Europe spoke Latin, which enabled pan-European communication. The novelist lamented Latin's disappearance and pointed out that the French language connected people in the 18th century, while German Romanticism shaped Europe in the 19th century.

Read more: 8 French heavyweight authors to check out at the Frankfurt Book Fair

The French novelist continued in that vein, suggesting that in the recent past, only two major literary movements haved served as a connecting element in Europe: first, the interest in Latin American novels, and second, the Scandinavian crime thrillers. Maybe the Germans, he said, should specialize in sophisticated pornography as a chance to keep the literature industry up and running. 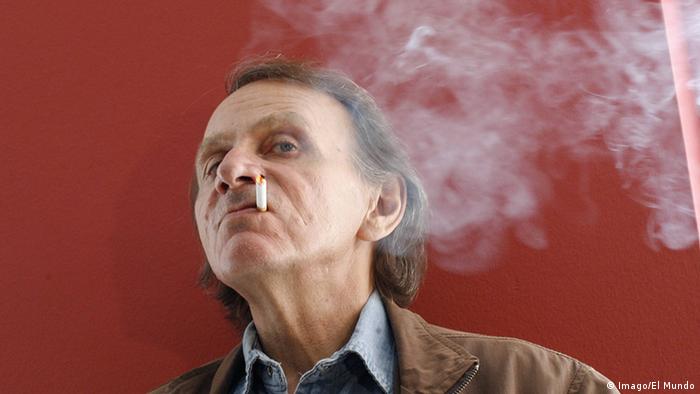 Houellebecq argued that literary translators in Europe need to be paid more. European translation, he pointed out, is the only way to make sure that European nations read more than just their own books and translations from English.

The French writer, taking a bashful drag on his e-cigarette, also commented on "the novel." He described it as a species of literature that over the years has cannibalized all other genres, including the essay, the poem and the tragedy. That said, Houellebecq stated he could not survive without reading novels.

An hour into the event, the three increasingly fretful ladies by his side finally dared interrupt the famous author's monologue. The long-awaited question and answer session came to a quick end, however, as the novelist gave just a few terse answers. A brief reading by a German actor of the German translation of "Submission" followed, and then Houellebecq left the stage.

With age, perhaps Michel Houellebecq has simply gotten a bit more peaceful. He is certainly not lacking in cultural pessimism. In his new book "In the Presence of Schopenhauer" about the German philosopher Arthur Schopenhauer, Houellebecq writes:

"I often feel compelled to think that nothing has happened on an intellectual level since 1860. It is increasingly difficult to live in an era of mediocracy — the more so if you feel unable to raise that level up yourself."

That could also be interpreted as a comment on the evening event in Frankfurt.

By a macabre coincidence, the date of publication of Michel Houellebecq's last political satire coincided with the "Charlie Hebdo" massacre. A year later, the author releases a collection of his earlier works. (06.01.2016)