French military aircraft are set to begin reconnaissance flights in support of the US Air Force over northern Iraq. The announcement came as foreign ministers gathered in Paris for an international conference on Iraq. 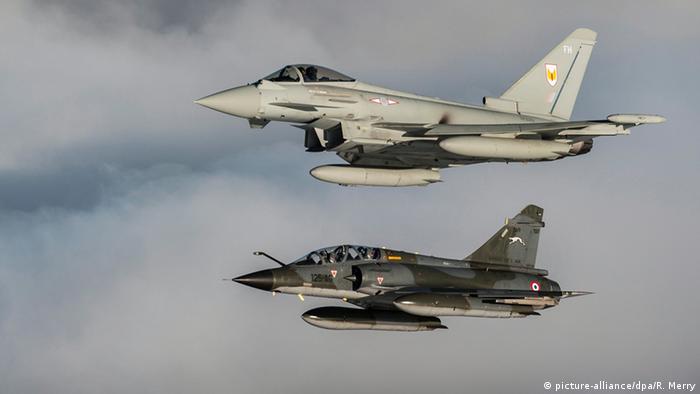 "We told the Iraqis we were available and asked them for authorization (to fly over Iraq), Fabius said.

"This very morning, the first reconnaissance flights will be carried out in agreement with the Iraqi and Emirati authorities," Le Drian had earlier told French military personnel, at the Al-Dhafra base in the United Arab Emirates.

The announcement and Le Drian's visit to the base, where a small number of French fighter jets are stationed, came as foreign ministers from US allies in Europe and the Middle East gathered in Paris for an international conference to coordinate a joint response to "Islamic State" (IS) fighters, who have seized larges swathes of territory in northern Iraq and Syria.

French President Francois Hollande, who is hosting the conference, had previously said that his country's air force was prepared to join US-led air strikes on IS militants in Iraq if necessary.

British Prime Minister David Cameron has so far ruled out having the Royal Air Force take part in air strikes, but it was not clear whether the beheading of a UK citizen at the weekend, which has been claimed by IS, would affect his position.

Before arriving in Paris, US Secretary of State John Kerry spent the past few days criss-crossing the Middle East in an effort to drum up support for a coalition to take on IS fighters.

Speaking in an interview with US broadcaster CBS on Sunday, Kerry said there was broad agreement that the international community needed to work together to defeat the IS, and that some allies had even offered to contribute ground troops.

"But we are not looking for that at this moment anyway," Kerry told CBS.

Germany's foreign minister, Frank-Walter Steinmeier, who is to represent Berlin at the Paris talks, called on Sunday for "internationally agreed action to effectively stop the flow of fighters and money."

On Friday, Interior Minister Thomas de Maiziere announced that the German government had banned all activity supporting IS. Last month, Germany agreed to supply Kurdish forces fighting the Islamists in northern Iraq with assault rifles, anti-tank weapons and armored vehicles. However, Germany has ruled out taking part in airstrikes.

US seeks allies in Paris conference on "Islamic State"

Diplomats are gathering in the French capital to discuss ways to overcome the threat posed by "Islamic State" militants. The United States is calling on its allies to show solidarity in the fight against the jihadists. (15.09.2014)

Diplomats from around the world are heading to France to discuss action against "Islamic State" militants after the murder of British hostage David Haines. Delegates are set to meet in Paris to discuss options. (14.09.2014)

Australia is set to deploy hundreds of soldiers to the United Arab Emirates to support a US-led operation against "Islamic State" militants. Prime Minister Tony Abbott said 10 aircraft would also be sent to the region. (14.09.2014)