Freiburg: The Bicycle Capital of Germany

As Germany's environmental capital, Freiburg has more bicycles than cars and an extensive network of roof-top solar panels. Be careful though: if you fall into the stream downtown, legend has it you'll marry a resident. 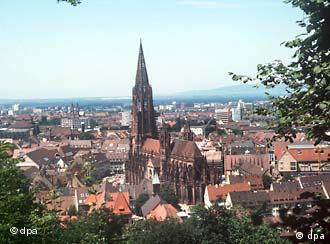 Freiburgers pride themselves on being environmentally conscious

Freiburg has twice as many bicycles as cars. Bikes are the trademark of a very environmentally conscious community. The small southern city considers itself the environmental capital of Germany.

Life is difficult for car owners in Freiburg as parking spaces in the city center are rare. However, there is an abundance of bicycle racks, especially around the university campus. It's easy to forget where you "parked" in the maze of thousands of bicycles.

A 400-kilometer (250-mile) network of bike paths criss-crosses the city. Two-wheeled traffic can get clogged along some of the routes. One of the biggest bottlenecks occurs along the Blaue Brücke (Blue Bridge), which intersects the railroad tracks on the way to the university. More than 10,000 cyclists traverse that route every day. 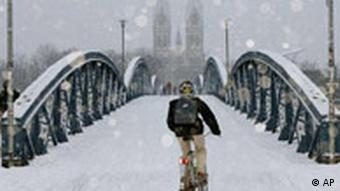 Freiburg's picturesque historic center, however, is off-limits to cyclists. The narrow alleyways and winding curves are more suited for a stroll than a bike ride anyway.

And then there are the "Bächle" -- small canals, about 30 centimeters (1 foot) wide and 10 to 12 centimeters (4 to 5 inches) deep, which are unique to Freiburg. They wind through the city center on both sides of most streets. One wrong step will land you in the water.

Local legend has it that if you step in a Bächle, you'll soon marry a Freiburg citizen. So be careful -- or careless, as you like. 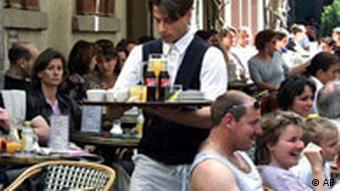 Stop for a beer when you get tired of cycling

The cyclists are a fundamental part of Freiburg's environmentally friendly image, but there's more to it than that. No other city in Germany has as many environment-related institutions as Freiburg, for example.

In addition, solar energy plays a pivotal role in the city of just over 200,000 residents. Conveniently, Freiburg is located in the middle of the sunniest region in Germany. There are 2,000 square meters (21,500 square feet) of solar cells on Freiburg's roofs, and the sports stadium even uses solar power to operate its floodlights.

It may just be a matter of time before the residents will be riding to work on solar-powered bicycles.

The Fürst zu Hohenlohe-Oehringen Winery in Baden-Württemberg, whose wines have graced the tables of German princes and royalty for 750 years, is the country's oldest family-owned and operated business. (13.11.2005)

Heidelberg, the old university town on the Neckar river, is among Germany's most popular destinations for foreign travellers. Tourists just can't get enough of the castle ruins, the narrow alleys and historical flair. (13.08.2005)

To the Romans it was proof of the immensity of their empire. To their enemies it was the manifestation of their oppression. To modern Germans, the ancient Roman border is now another cultural heritage site. (07.08.2005)

The City of Freiburg

This link takes you to a PDF file from the city of Freiburg with sightseeing tips.