After being trapped in an elevator due to a power outage, Pope Francis made it to his weekly Angelus prayers. There, he announced 13 new cardinals from the periphery of the church, some of whom have worked with refugees. 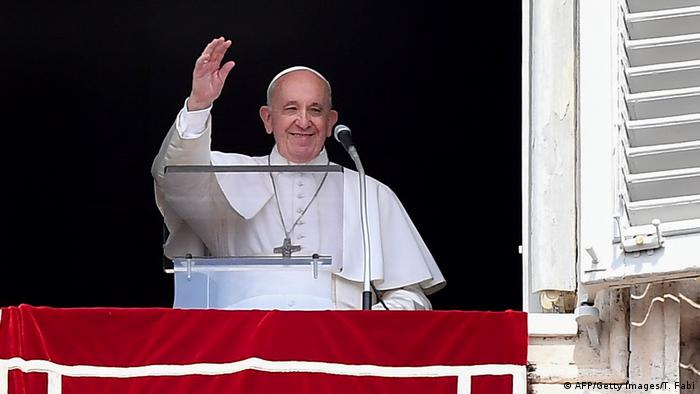 Pope Francis arrived late for his weekly Angelus prayer service on Sunday, prompting worried worshipers to speculate that the pontiff, 82, may have fallen ill. He surprised the crowd, however, by announcing that his late arrival was due to being stuck in a Vatican elevator for nearly half an hour.

Francis then further surprised his audience by saying that several of the new cardinals he had been expected to name would be from the Muslim world as well as clerics well-known for helping refugees.

"I was trapped in a lift for 25 minutes, there was a power outage and the lift stopped, but then the firemen came," the pope said.

"Let's give a round of applause to the fire service," he added, with the crowd obliging.

The pope then named the 13 men he will officially elevate to the status of cardinal in October. Several were from developing countries such as Cuba, Guatemala and Congo. Two more came from the Muslim-majority nations of Morocco and Indonesia. Another is a Spaniard who works in interfaith dialogue and has a background in Islamic studies.

The move is in line with Francis' desire to highlight the work of those on the periphery of the Church's reach.

"Their provenance expresses the missionary vocation of the Church to continue to announce the merciful love of God to all men on Earth," Francis said.

The other new cardinals include the Czech-Canadian Jesuit priest Michael Czerny, who has previously worked in ecology and social justice, and is now responsible for migration and refugees in the Vatican, and Matteo Zuppi, now Archbishop of Bologna, who was previously with the Sant'Egidio Community charity in Rome, known for its work with the homeless and refugees.

Cardinals are among the most powerful leaders of the church, and are the only clergy eligible to elect a new pope.

A historic shift in policy could pave the way for married men to preach in areas where clergy are scarce. The requirement for priests to have never been married has been in place for centuries. (17.06.2019)