The high-scoring antics of the Bundesliga came to an end on Sunday, as Wolfsburg and Frankfurt kept the scoresheets under control in their respective wins over Mönchengladbach and relegation-threatened Borussia Dortmund. 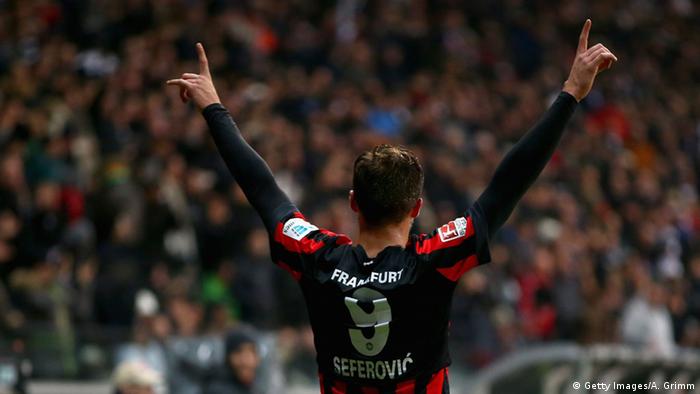 Losing a goal in the first five minutes of a match is inconvenient for any team, but the upshot is there is plenty of time to regroup and come back. That is, of course, unless you are Borussia Dortmund, struck down by abysmal form, which leaves them bottom of the league. 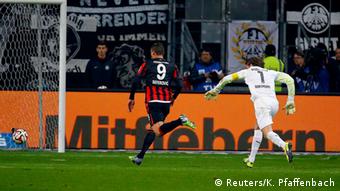 Alexander Meier moved to the top of the scoring charts, striking again for the eighth time this season to put Frankfurt ahead 1-0 in the fifth minute. Dortmund didn't look particularly good for the rest of the match, but at least they held on to hope that they could string together an equalizer if luck was on their side.

All luck evaporated in the 78th minute, however, when a colossal defensive meltdown between Matthias Ginter and goalie Roman Weidenfeller gifted Frankfurt their second goal.

After Dortmund's Pierre-Emerick Aubameyang lost control on the ball at Frankfurt's 16-yard line, Meier played a long ball to Hans Seferovic, who was looking to squeeze in behind the defense.

The ball went straight to Dortmund defender Ginter, whose attempted header back to Roman Weidenfeller sailed right past the keeper who was outside of the box. The miscommunication allowed Seferovic continue his run and easily slot the ball into the open goal to seal Frankfurt's 2-0 win.

Seferovic lifted his jersey after the goal to reveal a written tribute to Tugce on his undershirt, with the hashtags "civil courage," "angel," "courage," and "respect." Tugce was the victim of a violent attack earlier this month and succumbed to her traumatic injuries on Friday. 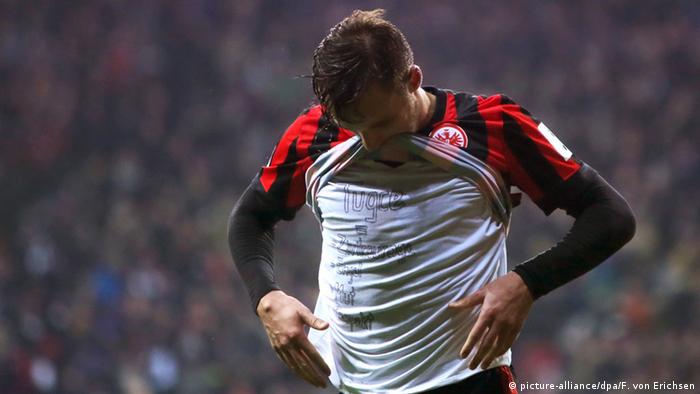 The loss, Dortmund's eighth of the season, leaves them dead last in the Bundesliga.

In the first of Sunday's two Bundesliga matches, Wolfsburg hosted Borussia Mönchengladbach in a clash of two teams in the thick of the fight for the top positions in the table behind run-away leaders Bayern Munich. 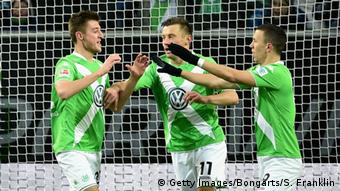 In the 12th minute, after Gladbach failed to clear a corner kick from Kevin de Bruyne, Wolfsburg used their second chance to get the ball to Marcel Schäfer, whose cross was punched away by Gladbach keeper Yann Sommer.

It deflected off of Robin Knoche, who saw the ball land at his feet in front of an open goal and took the shot to put the home side ahead 1-0.

Wolfsburg had the ball in the net just after the hour mark but de Bruyne was clearly offside when he directed Perisic's cross into the goal.

The rest of the game saw Sommer keep Gladbach within striking distance with some excellent goalkeeping, and two consecutive corners for Gladbach late in the game provided the guests with their best chances in the second half, but his teammates could not come up with a goal and lost their third Bundesliga match in a row.

The result sees them drop to fifth in the table, one point behind Augsburg and three behind Leverkusen. Wolfsburg stay in second place and trail table-leaders Bayern Munich by seven points.

The win marks a successful rebound following a midweek loss in the Europa League for the Wolves, although winning after playing in Europe is not uncommon for Dieter Hecking's men this season: Wolfsburg have won every one of their five Bundesliga matches following Europa League contests.

Along with a hatful of goals on Saturday afternoon, there were a few matters to digest from the Bundesliga. Schalke stay two-faced, Bremen are back and Paderborn are in trouble, Jonathan Harding writes. (29.11.2014)