Organizers of the Frankfurt Book Fair have stood by their decision to invite far-right publishers in the name of freedom of speech. That freedom seems to have gotten out of control during scuffles over the weekend. 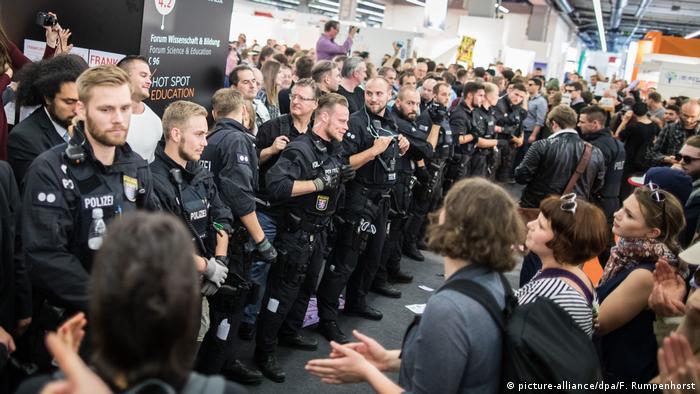 The Frankfurt Book Fair was the site of tumult over the weekend, as demonstrators protested a book presentation byright-wing publisher Antaios, which included controversial far-right Alternative for Germany (AfD) politician Bjorn Höcke.

Höcke, who made headlines earlier this year by decrying the Holocaust Monument in Berlin as a "monument of shame," was at the fair for the release of the book "Mit Linken leben" ("Living with Leftists").

When protesters began shouting "Nazis out!" Höcke's supporters retorted with "Everybody hates the Antifa!" They were referring to the radical left-wing anti-fascist movement that has now itself achieved international notoriety. Police were called to intervene. Later in the day, two authors from the right-wing extremist Identitarian Movement were forced to abandon a reading due to loud protests.

Those scenes followed a violent incident in which Nico Wehnemann, a member of the anti-political group Die Partei, was attacked after showing up at a right-wing stand to protest. Wehnemann claimed he was punched by a neo-Nazi and then pushed to the ground by private security as police looked on.

His personal details were taken, Wehnemann said, though not those of the man who attacked him. Onlookers are said to have chanted "Sieg Heil!" as Wehnemann was escorted from the premises. Wehnemann later went to the hospital to have his injuries treated and has said he will be pressing charges. 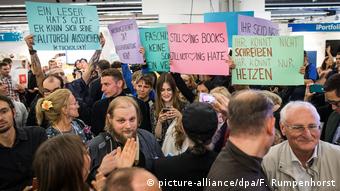 The events came on the heels of violence at the fair on Friday, when a music producer was punched in the face near the stand of right-leaning Junge Freiheit (Young Freedom) weekly newspaper. When Achim Bergmann, head of the left-wing Trikont record label, passed by a reading, a member of the audience punched him, splitting his lip. It has been said that Bergmann made a derisive comment in passing, provoking the man.

A spokeswoman for the fair confirmed the event, saying the perpetrator had been detained and that his personal details had been taken down. Bergmann, like Wehnemann on Saturday, went to the hospital for treatment and said that he, too, will be pressing charges.

Read more: Is Germany going too far in trying to control right-wing extremists?

Protecting the right to free speech

Antaios and other right-wing publishers have accused organizers of not adequately protecting their stands from left-wing activists. On Friday night, a stand shared by Tumult magazine and Manuscriptum publishers was raided and its entire inventory was stolen. 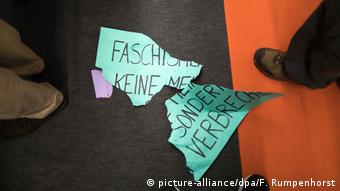 Organizers were widely criticized for inviting right-wing publishers to participate in the fair, the world's largest, but said they had done so in the interest of freedom of speech, encouraging visitors to engage in "active debate."

Whether active debate is possible was questioned by some, including publicist Jutta Difurth, who tweeted, "Freedom of opinion? Fascism is not an opinion but a crime."

After the Antaios publishing house invited the Amadeu-Antonio Stiftung, an organization that fights racism, to debate, the latter declined.