French President Macron has said he favors imposing financial penalties on EU states that refuse to accept migrants. His comments come on the eve of an EU summit on migration policy. 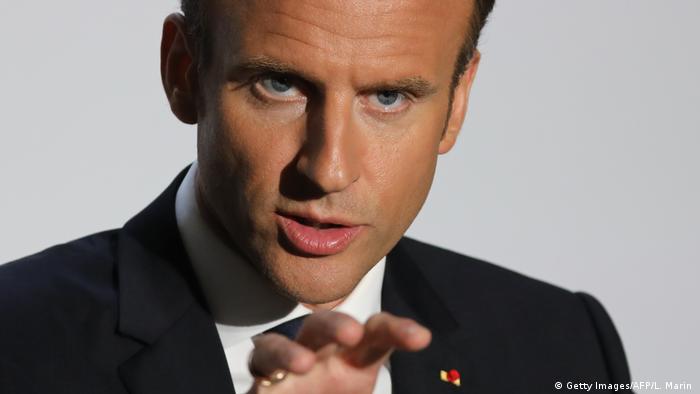 French President Emmanuel Macron said on Saturday that EU states that benefited from the bloc yet considered only their own self-interest when it came to taking in migrants with proven asylum status should face financial penalties.

"You can't have countries that massively benefit from the solidarity of the European Union and that massively voice their national selfishness when it comes to migrant issues," he told a press conference in Paris alongside new Spanish Prime Minister Pedro Sanchez.

"I am in favor of sanctions being imposed in the event of no cooperation," he added.

Both Macron and Sanchez also spoke in favor of establishing closed reception centers, set up close to where migrants often arrive first in Europe, where migrants can be held while their applications for asylum are processed. The centers would be created in accordance with guidelines from the UN's refugee agency UNHCR, Macron said.

Macron said migrants not entitled to asylum should be returned directly to their countries of origin and not travel via other countries.

The comments come a day before 16 EU leaders convene in Brussels at a summit to discuss the migration dispute that is dividing Europe and threatening the stability of one of the EU's key economies, Germany.

In a move highlighting the rift over the issue within the bloc, Poland, Hungary, Slovakia and the Czech Republic have said they will boycott the meeting. All four countries reject accepting refugees according to a mandatory resettlement scheme.

Italy's interior minister and deputy premier, Matteo Salvini, of the anti-immigration Lega party, gave an angry response to Macron's comments, saying the French president was wilfully underestimating the problems of migration for Italy.

"If it is not a problem for arrogant President Macron, we urge him to stop with the insults and show generosity with deeds opening the many French ports," Salvini said.

"If French arrogance thinks it can transform Italy into Europe's refugee camp, perhaps handing out a few euros as a tip, they've got it totally wrong," he added.

Italy and Malta this month became the focus of the heated debate over the responsibility each EU state should bear for migrants coming to Europe when they refused to take in the Aquarius rescue ship carrying more than 600 migrants.

The two countries are currently again refusing to allow a German NGO boat carrying more than 200 migrants into their ports. The boat is in limbo off the coast of Malta.

Owing to its location, Italy is one of the major destinations for migrants crossing to Europe from northern Africa. More than 560,000 migrants have landed on Italy's shores since 2014.