France′s National Front winning over voters | Europe | News and current affairs from around the continent | DW | 20.05.2014

The far-right Front National could become the strongest party in France in the European elections. The party has changed its image since Marine Le Pen took over. It’s now seen as younger and more middle-class. 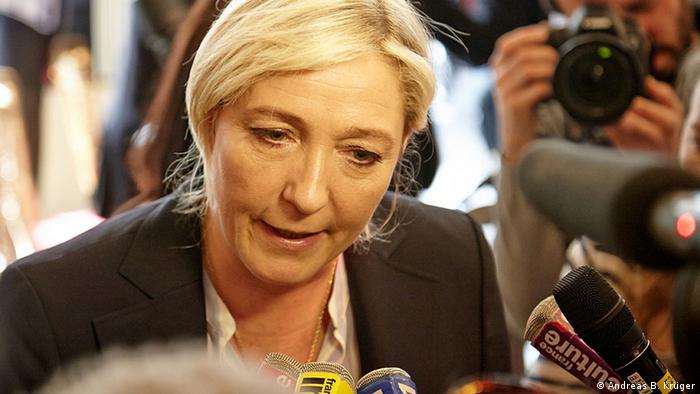 As Gaetan Dussausaye sits down at the big oval wooden table for the interview, the office door bell rings and campaign posters are delivered directly from the print shop. The last few weeks in the run-up to the European elections have been exceptionally busy for the 20-year-old philosophy student and his colleagues, who have spent nearly every free minute at the headquarters of the "Front National Jeunesse," as the FN's youth organization is called.

Dussausaye, who ran as a candidate for the Front National at the French local elections in late March, looks at the poster of Marine Le Pen and says "excellent" - with a big smile similar to the one his party leader is showing on the poster. He received 5.5 percent of votes in his constituency, the 11th arrondissement in Paris between the Place de la Bastille and République, which has traditionally been won by left-wing parties. "Sociologically speaking, the voters here are not exactly like us," he admits. "But what encouraged me during the campaign were the conversations with local residents, who showed some curiosity and no longer just radical rejection. And some also clearly indicated they supported our movement." Only two years ago, he adds, that would have been unthinkable. 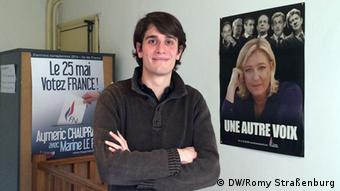 Marine Le Pen and her party owe this new level of acceptance by parts of French society largely to its young candidates and FN supporters like Dussausaye. With his delicate features and soft voice, Gaetan makes a charming impression on his listeners. His answers are eloquent and balanced. More often than not, he reacts with a counter question. "Why should the people be afraid of us?" he asks. "What would a right-wing extremist party actually be?"

Sovereignty, social justice and patriotism are values that attracted Dussausaye to the Front National and to become a member. Yet he is an anti-stereotype who is capable of presenting the far-right far in a more acceptable way by wrapping old nationalist positions in moderate discourse.

The FN strives for a France that is inward-looking and isolated, a country without the euro and full control of its own borders. That is to say, the party questions the Schengen agreement, which guarantees EU citizens freedom of movement within the European Union. Moreover, the FN campaigns for deporting all immigrants who have entered France illegally and reintroducing the death penalty in the country. 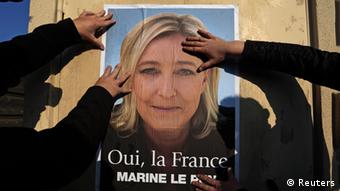 Political scientist Jean-Yves Camus considers the new generation of party members and their more moderate rhetoric as the key reasons for Front National's new "eligibility" – despite the party's radical positions. The party leader's personality, he adds, also plays a role.

Just last December, her father was sentenced to another fine for making racist comments about the ethnic group of Roma people.

When asked about Jean-Marie Le Pen, young FN campaigner Dussausaye sings a song of praise, but is quick to add that the 85-year-old sees "the world not necessarily in the same way as a young person in the 21st century." He prefers to talk about his party's current political program rather than about "history lessons" and about fascism. The "demonization" the party was allegedly subjected to for so long, he argues, no longer works. "The Front National has developed dynamically and shown everybody that enough is enough," he says. "We will force the media and our political opponents to see us the way we are, with our project, our ambitions and our program." 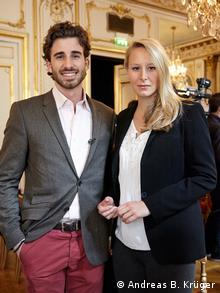 The look of the new Front National: Julien Rochedy and Marion Marechal-Le Pen

According to current polls, the Front National has reached a level of just over 20 percent, and could still emerge as the strongest party in the European elections on May 25. One reason for the party's growing popularity is the frustration with the lack of economic success achieved by the government of French President Francois Hollande. And the French are increasingly skeptical about Europe.

A recent study by pollster Ipsos says that 74 percent of the French who cast their ballot in the European elections aim to express their mistrust of the EU. In Germany, it's a mere 50 percent. In France, only 48 percent of interviewees replied that EU membership is "good," compared with 63 percent in Germany.

The FN's anti-Europe slogans are welcome to many crisis-stricken French people whose government has told Brussels it needed more time to adhere to the budget deficit limit.

When the party presented its candidates for the European elections at a press conference on April 22, its slogan came as no surprise: "Go vote for less Europe."

Marion Marechal-Le Pen accompanies her aunt Marine and her grandfather Jean-Marie to campaign rallies, gives interviews and poses for pictures. "Europe is a new form of hegemony that we need to fight," the 24-year-old says. It's the third generation of Front National supporters who claim that more than ever, it's about "France's liberty."

The traditional parties in France have so far failed to find a response to the question of how to counteract old positions wrapped in new slogans and keep the far-right party from repeating its series of election successes in future.

As for Gaetan Dussausaye, he wants to help the Front National win the presidential elections in France in 2017, claiming he is one of the few who "still believe in France."

The UK Independence Party (UKIP) is gaining popularity in Britain ahead of May’s European elections, forcing the country’s mainstream parties to adapt their rhetoric on Europe and the freedom of movement. (16.05.2014)

No surprise at far-right's success in France

After the first round of voting in French local elections, it's clear the far-right Front National has done better then ever. But it's not yet clear whether it will turn into France's political "third force." (24.03.2014)