France's army chief has resigned after clashing with President Emmanuel Macron over defense budget cuts. General Pierre De Villiers said he could not guarantee the defense of France. 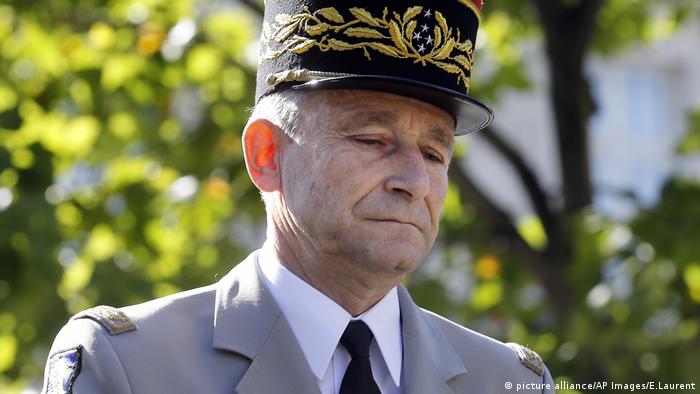 France's army chief abruptly quit on Wednesday in a mushrooming dispute with President Emmanuel Macron over budget cuts to the military, underlying the challenges the new leader will face over planned economic reforms.

"I have always taken care ... to maintain a military model that guarantees the coherence between the threats that weigh on France and Europe, the missions of our armies that don't stop growing, and the necessary budget means to fulfill them," he said in a resignation statement.

De Villiers, who has been in the position since 2014, added that he could no longer perform the functions of the job.

"I no longer consider myself in a position to ensure the durability of the military model that I believe in, to guarantee the protection of France and the French," he said.

Differences between Macron and General Pierre De Villiers came out in the open last week when the chief of staff sharply criticized government plans to cut this year's defense budget in a closed-door parliamentary committee, according to leaked reports.

The dispute snowballed when the 39-year-old Macron told army top brass that he was "the boss" and debates should not be made public. In an interview over the weekend, Macron said that "it is the chief of the defense staff who will change his position."

De Villiers, 60, for his part, issued a Facebook post "to a young recruit" saying: "Watch out for blind trust... Because no one is without shortcomings, no one deserves to be blindly followed." The message was widely interpreted to refer to Macron.

France is currently part of the US-led coalition against the "Islamic State" in Syria and Iraq and leads counter-extremism operations in West Africa.

French soldiers are also deployed in the streets of French cities under a state of emergency implemented after a series of terror attacks since 2015 that have killed nearly 230 people.

Macron has vowed to meet French NATO commitments to boost defense spending to 2 percent of GDP by 2025, but wanted to slash the military's budget this year by 850 million euros ($980 million).

The defense cuts are part of about a 4.5-billion-euro reduction in public spending Macron's centrist government aims to implement in order to reduce the budget deficit in line with EU demands and kickstart the sluggish economy.

Macron sought to downplay the friction with the military on Wednesday, but defense commentators and the opposition were critical of the new president.

Read more: Macron thanks US at Bastille Day celebrations

Jean-Luc Melenchon, the leader of the far-left France Unbowed movement, opined that de Villiers was correct to speak "frankly" during the closed door parliamentary defense meeting about budget cuts.

Macron named General Francois Lecointre, who has served in Rwanda, the former Yugoslavia and recently led the EU training mission to Mali the new chief of staff.

Opinion: Emmanuel Macron and Donald Trump - the lion and the fox

One might scoff that receiving Donald Trump in Paris is ingratiating. But DW's Catherine Martens says the whole of the EU may well profit from Emmanuel Macron's approach. (14.07.2017)

Defense, enterprise and education head the list for joint measures after the Franco-German Ministerial Council meeting in Paris. The two countries' leaders are developing closer cooperation as they look to EU reforms. (13.07.2017)