Up to 90 percent of Africa's art treasures are believed to originate from outside the continent. On the day a report is published in France, a number of artworks claimed by Benin are being returned. President Patrice Talon of Benin had asked France in 2016 to return carvings, scepters and sacred doors from the Palaces of Abomey, formerly the capital of the kingdom of Dahomey.

The announcement came as a report commissioned by Macron recommended the complete transfer back to Africa of works taken during the French colonial period, unless the current owners can prove they were acquired "legitimately."

There are an estimated 90,000 African artworks in French museums, around 70,000 of them in the Quai Branly museum in Paris. France holds far fewer works taken during military expeditions in Africa than either Britain or Germany.

During a visit to West Africa in November 2017, Macron said the "permanent or temporary" return of African heritage to the continent would be a "priority" in his term in office. "Africa's heritage cannot just be in European private collections and museums," Macron said.

At that point French law prevented the government from ceding state property, even in cases of pillage. 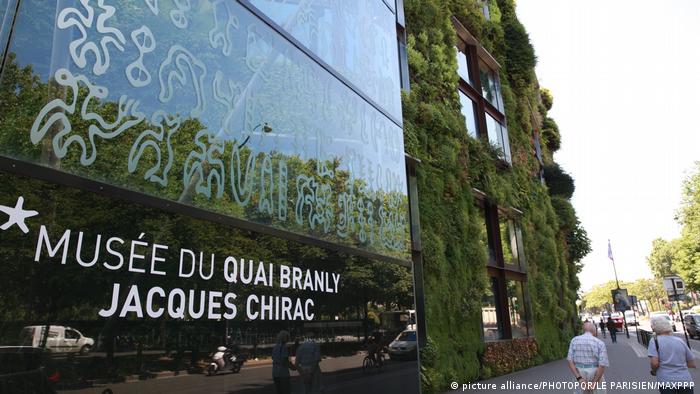 These were published on Friday. Sarr said: "We propose changing heritage laws so that all types of cases can be taken into account, and the criteria of consent can be invoked."

In their 108-page study "Restitution of African Cultural Heritage, towards a new relational ethics," the authors call for, as a general rule, the transfer of property back to Africa and not the long-term loan of objects in French museums to African museums. They urged the president to cast aside "political prudence and museum anxiety."

In the short term, they propose that 24 items or groups of objects be returned immediately to Mali, Benin, Nigeria, Senegal, Ethiopia and Cameroon.

Read more: Why are ex-colonies in Africa so important to France?

In the following years, France should deliver to each African state an inventory of artworks brought to France during the colonial period. African governments would then select the items they wish to have returned. To keep the artworks, the French owners or museums would have to prove they were acquired legitimately.

While conceding that not every case of restitution will be straightforward, with the possibility of multiple claims on particular objects, there was no justification for withholding them, the authors claimed. Hundreds of museums have been developed in Africa, ready and able to house the collections.

"We are dealing with the case of a continent which has almost nothing left of its history when we have it all," Savoy said. "The aim is not to empty Western museums to fill up the African ones, but to invent a new relationship based on ethics and equity."

The president is expected to review the recommendations and discuss them with his Culture Ministry and the country's museums.

The vast Sahel region south of the Sahara is a breeding ground for terrorism, since security gaps between territories loom large. EU funding aims to enhance regional cooperation against jihadist terrorists and drug lords (06.06.2017)