Protesters are angered by a policy that requires people to show proof of vaccination to enter public places, such as restaurants or movie theaters. Eleven people were detained as part of the demonstrations. 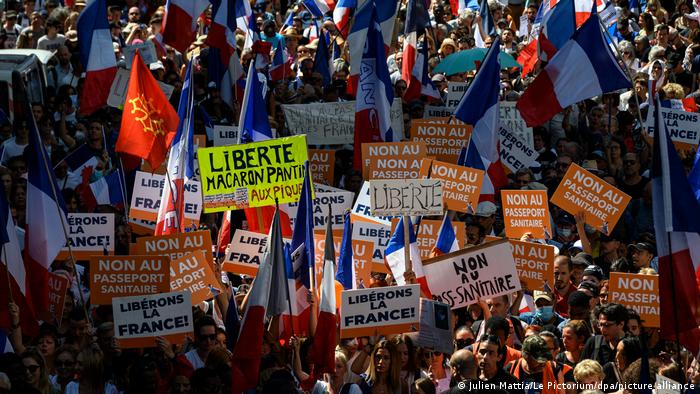 The protesters feel the new restrictions infringe on personal freedoms

Over 200,000 people took to the streets of French cities on Saturday to protest against a new "health pass" designed to prevent the spread of coronavirus.

The protesters waved French flags and held signs such as "No to the health pass" and "Liberty!"

"We want none of this!" a 53-year-old female protester in Paris told French news agency AFP.  "It is a political crisis disguised as a health crisis."

The French Interior Ministry said nearly 215,000 people took part in the demonstrations nationwide, short of the 250,000 expected. In Paris alone, some 1,600 police officers were tasked with responding to three separate marches.

Eleven people were arrested at the demonstrations, which were mostly peaceful. The protesters included members of the far-right, anti-vaccine activists and supporters of the populist "Yellow Vest" movement, among others. 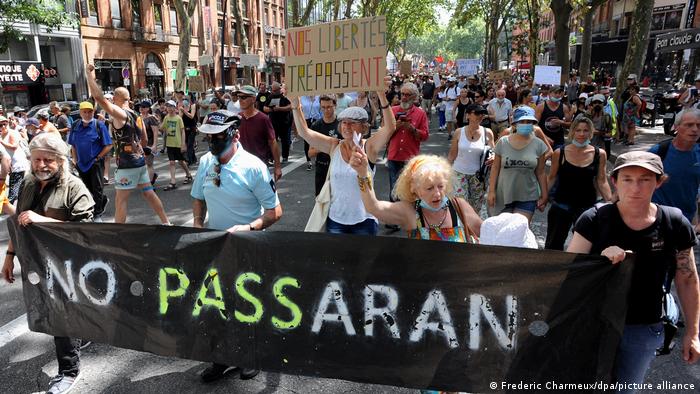 Protests also took place in other French cities, such as Toulouse and Montpelier in the southern part of the country. Some 7,500 people took part in the Montpelier demonstrations.

Fifth week in a row of anti-government protests

It was the fifth weekend in a row that France has experienced mass protests against coronavirus restrictions and vaccines.

About 237,000 people across France took part in protests last Saturday, according to French authorities.

Residents of France are obliged to show the health pass, which shows proof of vaccination,  to go to restaurants, movie theaters, or ride a train, among other activities. 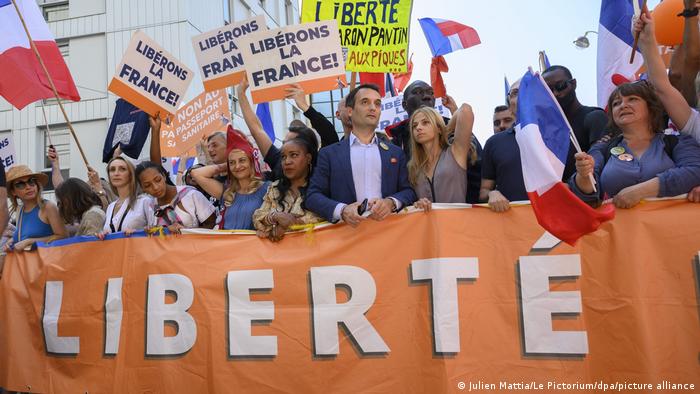 The protesters are also angered by mandatory vaccinations of health workers

The policy, backed by French President Emmanuel Macron, was approved by the French Constitutional Council earlier this month, as France grapples with the more contagious delta variant.

The French government has also forced health workers to receive the vaccination by September 15.

"The equation is simple. The more we vaccinate, the less space we leave this virus to circulate," Macron said during a televised address in July.

Recent polling in France suggests that the majority of people support the health pass policy.

In addition to France, Italy and Greece have implemented similar health pass policies, resulting in mass protests in those countries, as well.