Muslim women have pushed back against a ban on burkinis at a public pool, provoking a firm response from the far right. National Rally leader Marine Le Pen said the all-encompassing swimsuit has "no place in France." 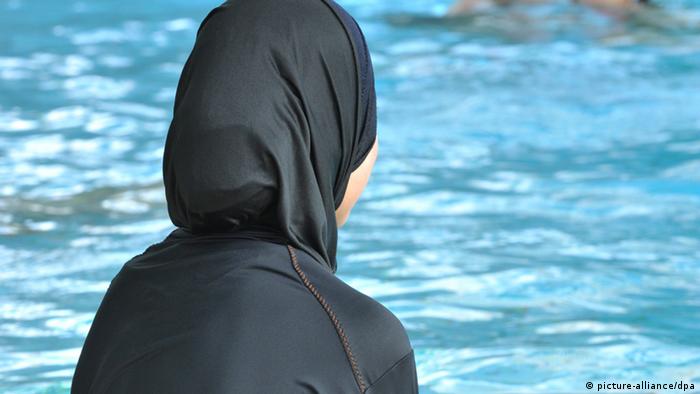 With the summer weather heating up, the debate surrounding the banning of the burkini in France has reemerged. Muslim women defied a local ban over the weekend and wore the Islamic full-body swimsuit, breaking the rules of a swimming pool in the southeastern city of Grenoble by doing so.

Women who wore the swimsuit, which covers the entire body except for the face, hands and feet, were issued a fine of €35 ($40).

The Jean Bron Swimming Pool is among several in France that have banned burkinis, and it saw many women breaching the rules as part of an organized protest.

"Operation Burkini" was created last month by members of the group Citizen Alliance of Grenoble in order to defend Muslim women's rights. The women are demanding that public pools, which currently require men to wear swim briefs and women to wear bikinis or one-piece swimsuits, change their regulations to accommodate burkini wearers.

'Burkini has no place in France': Le Pen

Far-right National Rally leader Marine Le Pen has criticized the activists and called for a firm response from local authorities.

"It's time to say loud and clear that the burkini has no place in France," she tweeted on Monday.

"If we accept the burkini, in a few years, all the young girls from poor neighborhoods will be bathing covered up, for moral reasons or to protect their reputations," she told Radio Classique.

Two of the women who took part in the protest held a very different view.

Speaking to the BBC, Hassiba and Latifa said they should have the same rights as everyone else.

"We have a dream: to have fun in public swimming pools like all other citizens, to accompany our children whenever they want to have a swim while it is very hot in the summer here in Grenoble.

"We must fight against discriminatory policies and prejudice in France, as we are actually deprived of our civil rights of access to public services and city-owned infrastructures," they told the BBC.

The Citizen Alliance said, via Facebook, that the action was part of a movement that began over a year ago with a petition signed by more than 600 Muslim women. They are pleading with Grenoble Mayor Eric Piolle to change the rules regarding public swimming pools.

Sporting goods chain Decathlon has canceled plans to sell a sports version of the hijab Muslim headscarf in France after a public outcry. Supporters of the hijab say it allows women to be an active part of society. (27.02.2019)

A DW web-video about the burkini has gone viral, sparking a debate about the relationship between female nudity and politics. Here is what can be learned from social media users' hundreds of reactions. (22.06.2017)

A report has alleged that a woman vacationing with her family in France was kicked out of a vacation home pool due to her full-body swimsuit. The owner then reportedly tried to retain the deposit for pool cleaning fees. (06.08.2017)