Family Minister Franziska Giffey says full-body swimsuits for Muslim girls in school classes can help them learn to swim. Others argue the garment is sexist and has no place in German schools. 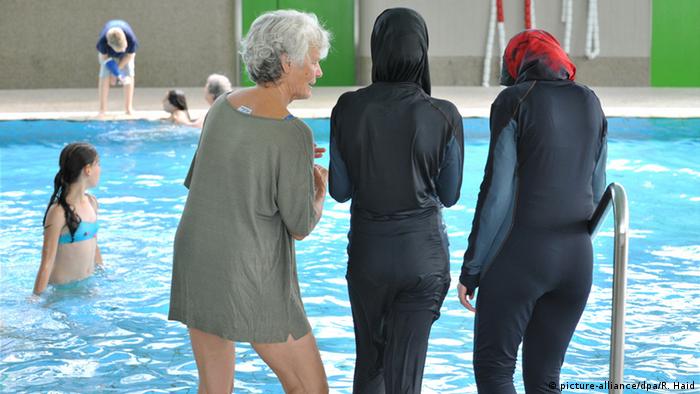 Full-body swimsuits, known as "burkinis," can be helpful in integrating Muslim girls into German schools by allowing them to take part in swim classes, Franziska Giffey said on Sunday.

"The most important thing is the well-being of the children and that includes being able to swim," she said at an event on Sunday.

The Social Democrat family minister, who was district mayor in the immigrant-heavy Berlin borough of Neukölln before switching to the federal level, said it was entirely justifiable for schools to not only allow the garment to be worn in class but to lend them to students who would otherwise not be allowed to participate.

Fellow Cabinet member, conservative Agriculture Minister Julia Klöckner, disagreed, saying that the burkini — which covers the whole body apart from the hands, feet and face — cemented a "misogynistic understanding in a place where children and teenagers are supposed to learn the opposite."

Conservative integration deputy minister for the state of North Rhine-Westphalia (NRW), Serap Güler, concurred, saying it sent out "the wrong signal" and was a "misunderstanding of tolerance."

The comments were triggered by the fact that a secondary school in the western town of Herne in NRW had been handing out burkinis for free to pupils whose parents would otherwise have taken them out of swim class.

State government guidelines say that it is not a school's responsibility to provide special clothing or equipment of any kind and that there is no right to separate classes for boys and girls.

The school in Herne stresses, however, that there have been very few cases and that, in the past, it had bought other types of sports clothing and equipment to allow all children to take part in physical education classes. It says the purchase was funded through donations.

Giffey emphasized that schools' education mandate should be at the forefront and that the burkini issue should not be "blown out of proportion into the decline of the West," a phrase sometimes used in Germany by those who believe that Muslims and Islam are gaining too much influence in the country.

Her appeal comes as the German Life Savers' Society (DLRG) — the biggest voluntary organization of its kind worldwide — warns that a quarter of German primary schools have no access to an indoor pool. In its annual report, it also says around 60 percent of 10-year-olds are not competent swimmers.

From bikini to burkini: The evolution of the bathing suit

Both bikinis and burkinis have provoked scandals as ideas of modesty and women's rights have changed over time. From functional to fashionable, here's a look at how the bathing suit has developed. (20.06.2017)

Why the burkini causes so much controversy

While string bikinis are fully acceptable in the West, the burkini - a full-body swimsuit - is the topic of heated debate. DW speaks to fashion theorist Barbara Vinken about this polemic garment. (20.06.2017)

David Ranan: 'Fear is being promoted by politicians.'