A DW web-video about the burkini has gone viral, sparking a debate about the relationship between female nudity and politics. Here is what can be learned from social media users' hundreds of reactions.

A recent DW web-video (click above to watch), which charts the evolution of German beachwear across the last 100 years or so, garnered more than 700.000 views across various internet platforms, including its English, German, Arabic, Turkish, Chinese and Farsi Facebook pages. It evoked more than 13.000 interactions by the users, among them more than 1400 commentaries.

The video invited social media users to express their opinions about the burkini in an effort to better understand the controversy around it. Reactions to the video reveal that the connection between the naked female form and ideas of freedom, power and politics remains divisive.

Join in the debate on DW Culture's Facebook page here.

The burkini - a combination of a headscarf, tunic and leggings worn together as a wetsuit, and preferred as beachwear by some Muslim women - became the subject of great controversy when French authorities tried to outlaw it last year. Photos of French policemen ordering Muslim women to remove their burkinis in public went viral, moving some to protest the policing of female bodies and others to hail it a defense of France's secular values, at least in this instance.

Female nudity has historically been part of a repertoire of strategies that feminist movements have used to challenge restrictive conditions imposed on women. In the West, nudity became a form of political protest during the sexual revolution of the 1960s and came to be seen as a threat to the patriarchal order.

More recently, the radical feminist group Femen, founded in Ukraine but now based in Paris, became known for staging topless protests to speak out against the sexual exploitation of women. 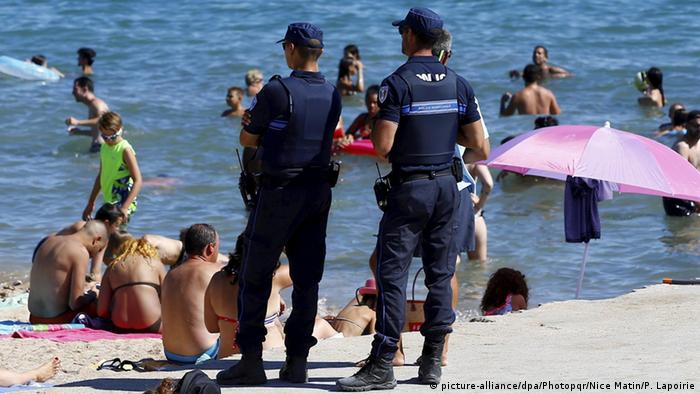 Moreover, nudity has been used to de-mystify the female body and de-sexualize the male gaze, arguing for a woman's right to wear whatever she wanted - or not - without it being considered a sexual invitation. It simultaneously empowered women to express their own sexuality according to their wishes and emphasize respect for consent.

Today, female nudity tends to take more commercialized shapes and forms. Kim Kardishian West's glossy nude which "broke the internet" back in 2014 epitomizes a culture in which female nudity is less concerned with protest than with profit. But is it emancipating to show some parts of your body and not others, and are women in the West pressured to strip their clothes just as much as Muslim women are pressured to cover themselves?

Read: Why the burkini causes so much controversy

In pictures: From bikini to burkini: The evolution of the bathing suit

'We cannot stand for freedom and be selective about it'

Across the spectrum of opinions observed among the Facebook comments on DW's burkini video, consent came up as the most recurrent point of contention between opposing factions. "The difference between the burkini and the bikini is that the burkini is not a choice. It is a mandatory thing, dictated by societal pressure," said one Farsi reader.

"We cannot stand for freedom and be selective about it - either you support her choice to say whatever she wants or you don't," wrote a reader of our English pages.

Another reader wrote in Arabic: "In my opinion, we must put a veil on the eyes of Arab men - and I don't exclude myself from this."

Are women forced to wear burkinis? There is no way of fully knowing this, because the reasons for donning one tend to vary based on the diverse backgrounds of Muslim women.

The attempted French burkini ban was proposed under the presumption that the burkini was an ostentatious religious symbol. However, as soon as the ban was applied, it ceased to function as a religious symbol and instead took the form of a political symbol, laden with the memory of the humiliations France wrought on its formerly colonized minorities.

However, even if the freedom to choose is exercised, does it make the burkini any less regressive by contemporary feminist standards? Possibly, but any blanket claim about what it represents can quickly turn into an empirical overreach, leading some DW readers to conclude that the right to wear it ought to be respected just as much as the right to oppose it.

One female reader thought, however, that it would be better for Muslim women to stay at home rather than wear the burkini in public.

A Twitter comment from another female reader said, "Through bend-over-backwards accommodation of other cultures, we're allowing Western culture to be set back 100 years or more."

It could be argued, however, that the introduction of the burkini does not mean the disappearance of the bikini, at least in Western cultures. And the full-body covering has enabled many Muslim women to access public spaces that were previously off-limits to them - something feminists might celebrate.

The one question posed on Facebook that surprisingly missed the debate is whether the burkini is comfortable or practical to wear on a hot summer day.

Few women responded to this question, though many men felt comfortable voicing one-word opinions about what women ought to wear on a hot day on the beach. One female reader did point out: "Why not both? Ask women; men don't need to answer in this thread."

No doubt there are many Muslim women out there for whom the burkini represents a patriarchal curse and others who feel empowered by it.

Many from various cultures see championing the right to wear the burkini as a reasonable and conscientious choice, but it must be balanced by an awareness of the painful reality faced by some Muslim women, who are desperate to break free from their densely-woven prisons.

While France suspended its proposed burkini ban last summer, the debate, it seems, will continue.

An administrative court on the French island of Corsica has refused to lift a burkini ban that was introduced following a mass brawl on a beach. The judge said the ruling was justified on public order grounds. (07.09.2016)