Germany and France are pushing for greater cooperation at a meeting of EU defense ministers in Bratislava. But despite its vote to leave the EU, Britain is threatening to block their ambitions. 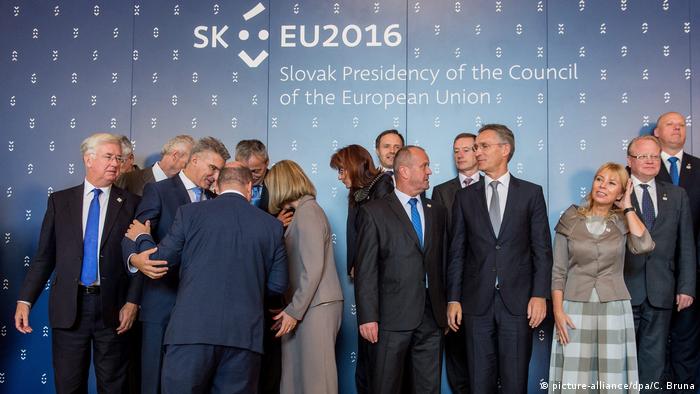 The topic of closer cooperation on European defense issues has been on the EU's agenda for almost 20 years. Not much progress has been made to date; Britain has blocked all major initiatives. But in the wake of the Brexit vote, Paris and Berlin now see a new opportunity. Both see strong European defense as the way forward in the EU, which is why they are putting a fresh spin on some old proposals at the meeting of EU defense ministers in Bratislava. They also have the support of Italy, which is adding some ideas of its own that go even further.

"When you see how much personnel and financial commitment we have, but how little we coordinate with one another, then there is definitely room for improvement," said German Defense Minister Ursula von der Leyen. Her French counterpart Jean-Yves Le Drian was less cautious; he said he hopes to see significant progress before the end of the year. The two ministers are proposing to share logistics and military medical resources.

In the past, it has taken months before the Europeans were able to get civilian-military projects off the ground; now they want to be faster to initiate disaster response missions or peacekeeping missions in Africa, for example. Migration was also named as an area where Europe could be asked to use its civilian-military resources for border control. 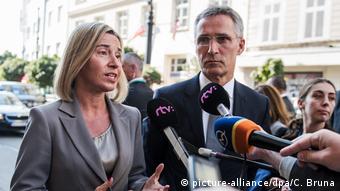 Both countries are also concerned with strengthening the European defense industry. In November, the EU Commission is due to present an action plan that includes financing proposals, such as investment funds, and facilities for research and development.

In Bratislava, clear camps emerged. Spain, Portugal, Greece, Hungary and the Czech Republic are in favor of the proposals, insiders say. Poland, on the other hand, is seeking assurances that a common European defense strategy doesn't step on NATO's toes. The establishment of a European defense headquarters, for which Germany has suggested the Eurocorps headquarters in Strasbourg, is proving to be a more contentious issue for many member states. The headquarters would serve as central command for future European missions.

EU Foreign Policy Commissioner Federica Mogherini attempted to calm concerns from some member states that the proposals would weaken NATO or double up on its structures. "We are not talking here about a European army, rather about better cooperation in conjunction with NATO," she said. Mogherini will present a cooperation plan at the defense ministerial in November; government heads could approve the plan by December.

But Britain will determine whether the EU will approve the plans with 28 votes, or with just a group of countries within the framework of a permanent structured cooperation. London is being difficult. In Bratislava, British Defense Secretary Michael Fallon was once again wary. "We agree Europe needs to do more…but simply duplicating or undermining NATO is the wrong way to do it," he said. Prior to the meeting, he'd already declared his opposition to any idea of a "European army" in British newspapers.

NATO Secretary General Jens Stoltenberg dismissed Britain's objections in Bratislava: "There is no contradiction between strong European defense and NATO." Before the Brexit referendum, he called on Europeans to strengthen their common defense, and said he continues to do so now. It's about additional capabilities, Stoltenberg said, not a duplication of NATO structures.

In Britain, however, the fight against the EU proposals continues. Insiders at the meeting said that no one, except for Hungary, even so much as mentioned the idea of a European army. But Britain continues to hold up this straw man so that it can be seen to publicly shoot it down. Just how big a blockade the British government intends to mount remains to be seen - although it did promise not to hinder the EU in its decision making after the Brexit vote.

Chancellor Merkel has said the EU must show unity at its upcoming summit in Bratislava. It will be the first time that the leaders of the European Union nations will meet en masse since Brits voted to leave the bloc. (15.09.2016)

The US and India have agreed to bolster defense and trade ties with an aim to minimize China's influence in South Asia. Beijing and Islamabad are forging their own alliance, which could increase tension in the region. (31.08.2016)