Chancellor Merkel has said the EU must show unity at its upcoming summit in Bratislava. It will be the first time that the leaders of the European Union nations will meet en masse since Brits voted to leave the bloc. 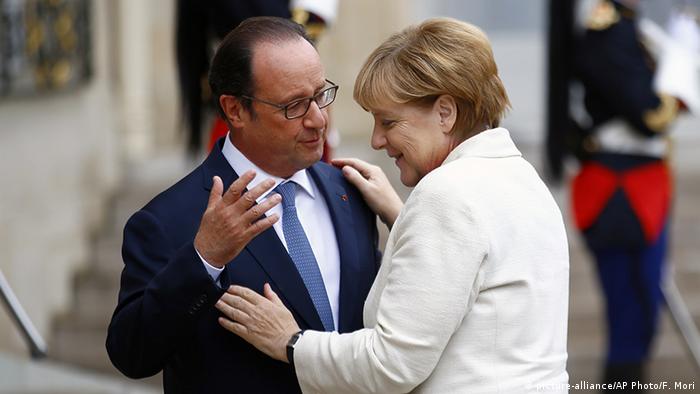 Germany and France need to do more to help protect the European Union from terror threats and look out for the EU's future, Angela Merkel and Francois Hollande said at a joint press conference following their meeting in Paris Thursday.

The German chancellor and French president discussed plans for the European Union's Britain-less summit in Slovakia's capital on Friday.

"We have understood that it is now about applying an agenda for Bratislava that makes clear that we are determined to react together to the weaknesses, to the tasks we face," Merkel told reporters in Paris on Friday.

France and Germany had long been the go-to countries for dealing with the European Union's problems. But domestic discontent with Merkel and Hollande has given them a weakened appearance on the international stage, as well, and their respective administrations no longer see eye-to-eye on many international issues.

"Europe is at a very decisive point in time," Merkel told reporters after meeting with Hollande on Thursday. "I believe that we need a clear agenda."

Despite their fading fortunes, Merkel and Hollande met in Paris in an attempt to hash out a unified position ahead of the upcoming EU summit. France's president said the European Union would need to work hard to manage the forthcoming Brexit.

"We know the challenges," Hollande told reporters after the talks. "We know what's at play."

Before the meeting, Hollande's office had announced that the leaders would attempt to agree on proposals for Friday, with the EU's security at the top of the agenda. According to French officials, they also planned to discuss patrolling the EU's external borders and making it easier for police to work with their counterparts in other member nations.

Hollande and Merkel both want to create a permanent EU military headquarters that could dispatch the bloc's new troops quickly, a long-standing plan long opposed by Britain - which no longer stands in the way.

"We must protect Europeans," Hollande said.