French police have arrested six people over reported plans to stage a "violent" attack against President Emmanuel Macron. Security sources say the suspects are members of the radical far right. 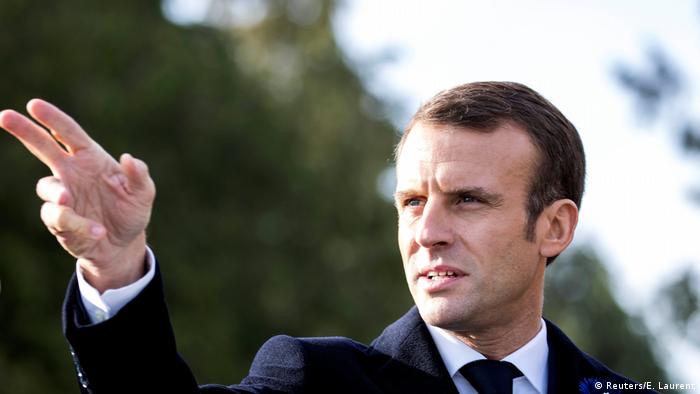 Six people from France's far right have been detained on suspicion of plotting to attack President Emmanuel Macron, an official has said.

Sources cited by news agencies said the domestic spy agency (DGSI) made the arrests in three different French regions after receiving intelligence about an "imprecise and loosely formed" plan for "violent action" against the president.

The alleged scheme was uncovered days before world leaders, including US President Donald Trump, are due in France for ceremonies marking 100 years since the armistice that ended World War I.

The six suspects — five men and one woman aged between 22 and 62 — were detained at properties in the Alps to the southwest, Brittany in the northeast and Moselle on the border with Germany and Luxembourg.

Interior Minister Christophe Castaner told reporters the suspects are believed to be far-right activists, and that authorities feared "concrete threats" from the group.

Prosecutors have opened a preliminary investigation into a suspected criminal terrorist association, according to a judicial source.

This is not the first attempted plan to attack Macron. In July 2017, a 23-year-old was charged with plotting to assassinate the president during France's Bastille Day military parade.

IS-related terror attacks in France since 2015

A deadly knife attack in Paris is the latest terror attack to hit France that has been claimed by the militant "Islamic State" group. Over the past three years, there have been similar attacks, and some close calls. (13.05.2018)

French president, Emmanuel Macron has decided to implant into ordinary French law many of the provisions of the state of emergency signed by his predecessor Francois Hollande after terror attacks in November 2015. (01.11.2017)