Kosovo's former prime minister has been arrested in France in response to an international arrest warrant for war crimes filed by Serbia. Ramush Haradinaj was stopped as he flew in from Kosovo's capital, Pristina. 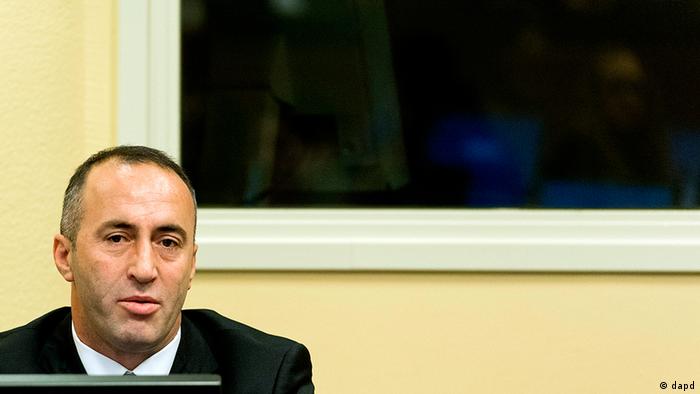 Ramush Haradinaj (photo above), a former guerrilla fighter, was arrested on his arrival at Basel-Mulhouse-Freiburg airport, located near the Swiss and German borders, according to sources close to the French investigation.

The French judicial authorities will now examine the Serbian request. Serbia says his unit, the so-called Black Eagles, tortured and killed dozens of Serbian civilians, whose bodies were found near Radonjic Lake in the Decani region.

Kosovo and France have good diplomatic relations, with Paris one of the biggest supporters of the youngest European state.

The 48-year-old leader of the opposition party Alliance for the Future of Kosovo (AAK) was travelling on a diplomatic passport when he was stopped.

Haradinaj is a former leader of paramilitaries who fought for Kosovo, a predominantly ethnic Albanian province of Serbia, to gain independence in 1998-99.

In June 2015, Haradinaj was arrested by Slovenian police but was released after two days following diplomatic pressure.

Former Kosovo Prime Minister Ramush Haradinaj has been detained in Slovenia. He is wanted by Serbia for his alleged role as a guerrilla commander during the Kosovo war that came to an end in 1999. (17.06.2015)

The former prime minister of Kosovo, Ramush Haradinaj, has been once again acquitted of crimes against humanity. The retrial the UN war crimes tribunal in The Hague backed up the court's original 2008 verdict. (29.11.2012)

Brothers in arms up in arms

Haradinaj was a former comrade-in-arms of Kosovo's current president, Hashim Thaci, but is now a political adversary.

Thaci, however, described the detention on Wednesday as "unacceptable."

"We, members of the Kosovo Liberation Army, are proud to have fought against discriminating and criminal laws of Slobodan Milosevic's regime," he wrote on Facebook.

"We will take every step to ensure that Haradinaj is released as soon as possible," Hoxha said.

The 1998-99 Kosovo conflict was the last war in the breakup of the former Yugoslavia.

It ended in a NATO bombing campaign against Serbia and, in 2008, in Kosovo's independence, which is still not recognized by Belgrade.

Haradinaj, a commander of the Kosovo Liberation Army (KLA) during the war, became prime minister in 2004 but stepped down after just over three months to face 37 charges of war crimes at the International Criminal Tribunal for the former Yugoslavia (ICTY).