Pierre Gasly took advantage of a chaotic race at Monza to claim a maiden Grand Prix win from 10th on the grid. Lewis Hamilton finished down in seventh, but he was far from the biggest underachiever in Italy. 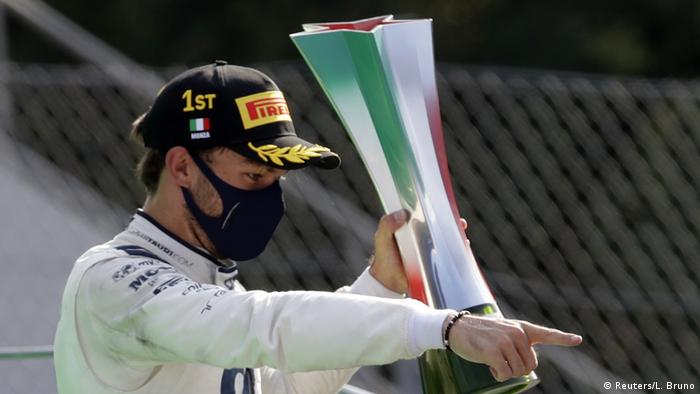 Coming in to Sunday's Grand Prix, Lewis Hamilton had won six of the last seven races and four of the last five driver's titles. But this was not the day for the Briton, nor any of the pre-race favorites.

Hamilton was penalized during a frenetic race for pitting at a time when he shouldn't have done and ended up back in seventh.

France's Gasly, who qualified 10th, found himself out in front after a string of bizarre occurrences and just clung on to beat McLaren's Carlos Sainz in second and Racing Point's Lance Stroll.

If that top three was unexpected, the absence of Max Verstappen from the points due to a retirement was too, and Valtteri Bottas' fifth-place finish means Hamilton still has a comfortable lead.

But Sunday was a day for the lesser lights, and Gasly in particular. The 24-year-old was demoted by Red Bull last year to sister team Toro Rosso, who have been rebranded Alpha Tauri and have their base in Italy.

"I’m not realizing what's happening right now," he said before shedding a few tears on the podium. "It was such a crazy race and the car was so fast," he said. "This team have done so much for me."

Though the Alpha Tauri link brings some comfort to Italian F1 fans, things went from very bad to even worse for home favorites Ferrari. Charles Leclerc walked away from a serious crash about halfway through the race, while his teammate Sebastian Vettel lasted just six laps after a brake failure.

Championship leader Lewis Hamilton set a track and F1 record of 1 minute 18.887 seconds on the quick Monza circuit as he bids for his seventh win in the last eight Grand Prix.

Monza is one of the quickest tracks on the F1 calendar and drivers attempted to use their rivals' slipstreams to improve speed, leading to a few near misses. But, as ever, Hamilton navigated the difficulties with ease.

The six-time world champion has a 47-point lead over Max Verstappen going in to Sunday's race, with Bottas a further three points behind.

But Sainz was the day's big surprise, breaking up the Hamilton-Bottas-Verstappen trio that have dominated all season.

"I've been feeling very strong since Q1, and since then it was just chipping away," he said after equaling his best ever qualifying position. "The last lap I nearly messed up, I had a big moment in Lesmo 1 and I'm actually shaking a bit."