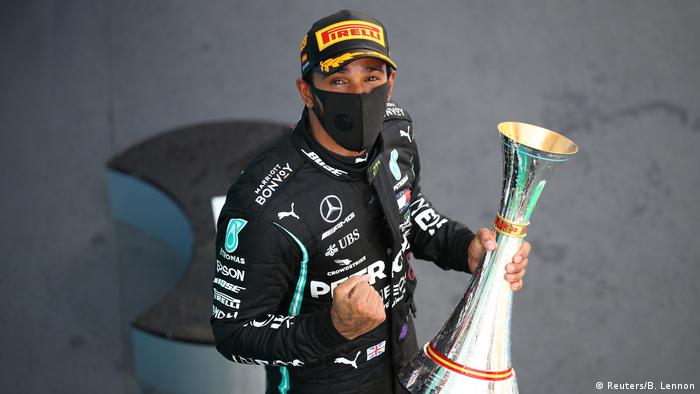 A calm and controlled drive by Lewis Hamilton saw the Briton coast to victory in Barcelona and extend his championship lead to 37 points.

Red Bull's Max Verstappen managed to split the Mercedes pair, following a poor start by Valtteri Bottas, who slipped from second to fourth. However, Bottas recovered to earn a podium place.

Best team: Racing Point — Fourth and fifth for Racing Point, who enjoyed another strong race weekend. With the Mercedes out of reach, this was about as well as they could have done.

Drive of the day: Lance Stroll (Racing Point) — A brilliant start by Stroll set the tone for the young Canadian. He jumped from fifth to third by the end of the first turn. He finished just off the podium in fourth, but overall a superb drive to secure more points for his team.

Biggest controversy: Verstappen's radio bust-up — On lap 27, Max Verstappen clashed with his engineer on the team radio, telling them to "stop thinking about Lewis Hamilton and concentrate on our race". "Head down, Max" came the terse reply.

Lap 66/66 — LEWIS HAMILTON WINS THE SPANISH GP! It's another pole to flag victory for the world champion, who wins for the fourth time in Spain. His 88th GP victory — Verstappen is second and Bottas gets third, but Bottas gets the consolation of the fastest lap on the final lap.

Lap 60/66 — Bottas is making little impression on Verstappen, who seems to have second place sewn up. Sainz and Stroll get ahead of Vettel, who is back down in seventh. Stroll should grab fourth once Perez's penalty is calculated.

Lap 55/66 — Fourth-place Sergio Perez gets hit with a five-second penalty for ignoring a blue flag, and he is five seconds ahead of Vettel — the German could get a season-best fourth place to split the two Racing Points.

Lap 49/66 — Bottas pits and is quickly followed by his teammate. Bottas returns to the track in third and has a little over 15 laps to try to close down Verstappen. Hamilton gets some fresh mediums and, barring something extraordinary, is on course for another win.

Lap 41/66 — Lerclerc retires! The Ferrari's engine cuts out and he's unable to revive it.

Lap 37/66 — Kimi Raikkonen sets a new Formula One record! The 40-year-old has raced further than any other driver in the history of Formula 1.

Lap 34/66 — Albon gets past Ocon, and is now in eighth. Up front, Hamilton is unchallenged. Rain is expected around lap 50, which could spice things up.

Lap 27/66 — Verstappen is becoming the story of this race. The Dutchman goes on a tirade, telling the team to "stop thinking about Lewis and concentrate on our race". "Head down, Max" is the terse reply. A ticking off for Verstappen.

Lap 22/66 — Verstappen finally pits and it's a world class stop of 1.9 seconds, which gets him back on the track just ahead of Stroll. Any longer and Verstappen would have lost an extra place. Despite his frustration, that worked out well for Red Bull. The ball is now in Mercedes' court.

Lap 21/66 — An unhappy Verstappen tells his race engineer that he wants new tires, but he's being left out there for now. The Red Bull is now over seven seconds behind Hamilton. Verstappen's teammate Albon has already pitted onto the harder tire.

Lap 15/66 — Hamilton has picked up the pace as we enter the first round of pit stops. A fastest lap of 1:23.067 by the race leader and the gap is already over three seconds — Verstappen can't live with him. Hamilton clearly feels he has done his bit to help Bottas get around Verstappen.

Lap 10/66 — Hamilton currently backing up Verstappen to help Bottas keep the Red Bull within striking range. "Gap is starting to close to Lewis," Verstappen is told, but says "I know, but he's driving super slow". Verstappen is 1.386 seconds behind Hamilton, and Bottas is 3.459 seconds behind the leader.

Lap 5/66 — Stroll does well to keep Bottas at bay, but the Mercedes eventually makes it through to regain one of the places he lost. Getting past Verstappen won't be quite as straightforward though...

Lap 1/66 — GO GO GO! Hamilton gets a good start to stay ahead but it's a disastrous start by Bottas, who slips to fourth! Stroll makes up two places to move ahead of the Mercedes on the inside. Bottas is now sandwiched between the two Racing Point drivers, with Verstappen in second.

Qualifying roundup: The slimmest of margins separated Lewis Hamilton from teammate Valtteri Bottas as Mercedes picked up yet another qualifying 1-2, this time in Barcelona.

Though the German team have been dominant thus far, a win for Max Verstappen last time out had opened the door a crack in the driver's championship, with the Dutchman trailing Hamilton by 34 points and Bottas by just 4.

But Saturday's display eased any fears the German team may have had.

Hamilton posted a best time of 1 minute 15.584 seconds around the 4.655-kilometer Circuit de Catalunya in Barcelona for his record-extending 92nd career pole position.

Bottas could have snatched pole in his last flying lap but was let down by his final sector and ended 0.059 seconds adrift. Max Verstappen of Red Bull was third, 7 tenths of a second off Hamilton, but will expect to be closer on Sunday.

Meanwhile, German driver Sebastian Vettel's nightmare continued after he again failed to reach Q3. He had to settle for 11th place on the grid for the second race in succession.

Quote of the day: "I felt happy in the car, I hope I can apply a bit of pressure. It is
very hard to overtake here but we will do everything we can to be
close to them and make it difficult." Max Verstappen sets his sights on Mercedes again.

The circuit: Built in 1991, ahead of the 1992 Olympics, the Circuit de Catalunya is very familiar to all the drivers on the circuit as it is where testing is carried out. Overtaking has become tougher in recent years, which may play in to Hamilton's hands. But the tires on the Mercedes have struggled to cope of late and temperatures are set to get close to 30 degrees on Sunday.

Championship leader and reigning champion Lewis Hamilton will again start on pole position for the Spanish Grand Prix. The Mercedes driver edged out teammate Valtteri Bottas while there was more woe for Sebastian Vettel.